Kesha stands firm in fight against Sony and Dr. Luke: "I would rather let the truth ruin my career than lie for a monster" 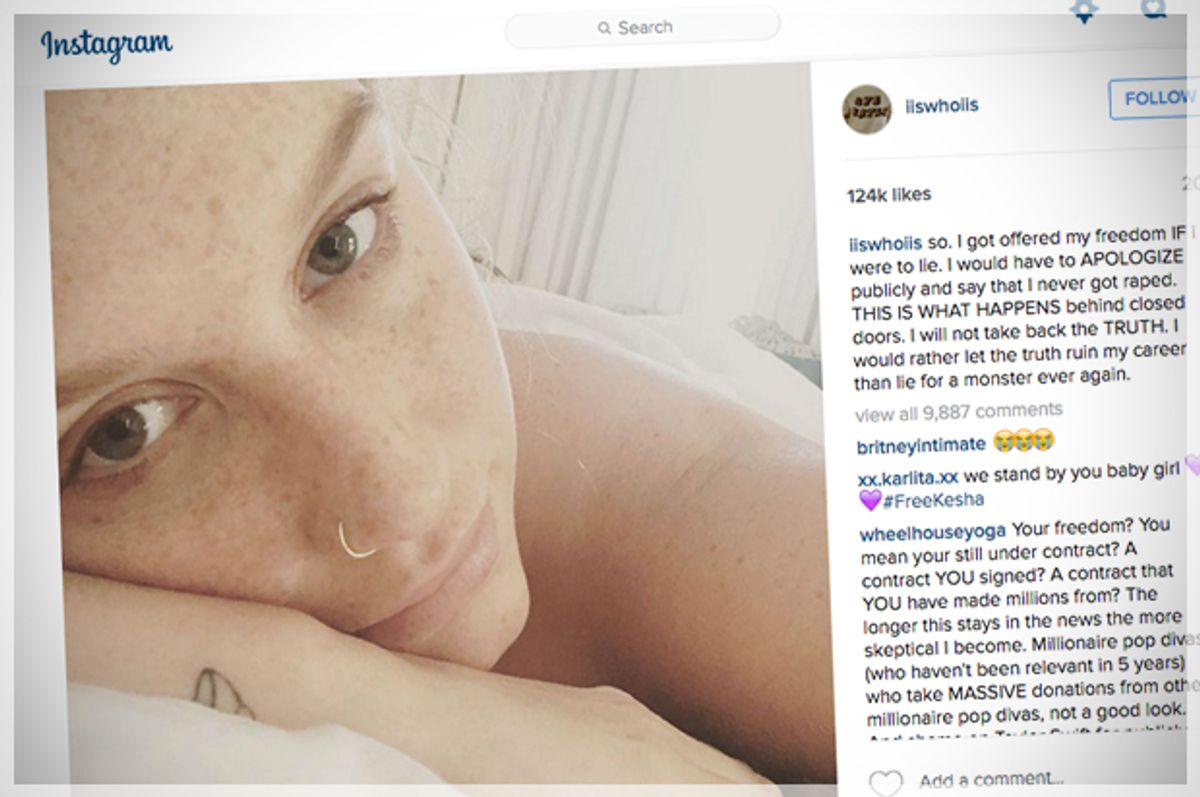 "All I ever wanted was to be able to make music without being afraid, scared, or abused." That's what Kesha wrote to her fans on Facebook back in February. But as her legal battle with Sony Music and producer Lukasz "Dr. Luke" Gottwald drags on, she's now issued a new statement that makes clear the price she's willing to pay for that desire.

On Instagram on Sunday, the 29 year-old singer and songwriter posted a photo of herself, makeup free and in repose, in which she claimed, "so. I got offered my freedom IF i were to lie. I would have to APOLOGIZE publicly and say that I never got raped. THIS IS WHAT HAPPENS behind closed doors. I will not take back the TRUTH. I would rather let the truth ruin my career than lie for a monster ever again." A source told Rolling Stone this week that "a couple months ago" Kesha's and Dr. Luke's legal teams did discuss the idea, but Rolling Stone says that "It's unclear, however, whether that option occurred during formal settlement talks between the two parties or if the idea was simply proposed to Kesha's team."

In 2014, Kesha sued Dr. Luke, claiming he "sexually, physically, verbally, and emotionally abused" her over the course of a decade of working together, beginning when she was still a teenager. Last year, she amended the suit to include Sony Music, claiming label execs "either knew of the conduct and turned a blind eye, failed to investigate Dr. Luke's conduct, failed to take any corrective action, or actively concealed Dr. Luke's abuse." She sought to break her current contract to "allow her to freely enter into contracts with other recording and publishing companies."

In an affidavit last year Kesha said decisively, "I know I cannot work with Dr. Luke. I physically cannot. I don’t feel safe in any way." Sony has said it offered to let her work with another producer, but her attorneys claim the company was "setting her up to fail" and wouldn't promote her music if she took the deal. She is still under contract to make three more albums under Dr. Luke's Kemosabe label.

Dr. Luke, meanwhile, has vehemently denied the accusations. The very public dispute came to a head this past winter when the court decided to uphold her contract, declaring, "You’re asking the court to decimate a contract that was heavily negotiated and typical for the industry… My instinct is to do the commercially reasonable thing." Kesha broke down in sobs when the decision was announced.

Soon after, Dr. Luke spoke out on Twitter, calling the allegations "motivated by money" and vowed, "It’s sad that she would turn a contract negotiation into something so horrendous and untrue. But I feel confident when this is over the lies will be exposed and the truth will prevail." Kesha's supporters in turn have banded around her under the hashtag #FreeKesha.

And after Kesha posted her message on Instagram Sunday, reps for Dr. Luke issued a statement to Rolling Stone, saying, "The Court repeatedly stated Kesha is already free to record without Dr. Luke, and that she had not presented any facts supporting her claims. That's because all the evidence — including Kesha's own videotaped sworn testimony — show her allegations are false. The only thing Kesha is not free to do is to continue to lie about Dr. Luke through publicity stunts and outrageous smears, ignoring the fact that by her own free will she went to work and entered into new contracts with Dr. Luke years after this 'incident' supposedly happened. Her goal all along has been solely personal enrichment by seeking to break contracts that brought her success and millions so she can enter into more lucrative ones. We look forward to our day in court holding Kesha accountable for her lies."

Dr. Luke is not under criminal investigation. And in 2011 deposition, Kesha denied that he drugged or assaulted her. That doesn't mean she isn't telling the truth now —sexual assault survivors, including those abused at a young age, often feel pressure and shame about coming forward. It does however make her case more challenging from a legal and financial standpoint. So one could understand, with so much at stake, how tempting it might be to make a trade. And the fact that she's so adamant that she won't, even knowing it could "ruin a career," suggests that right now, there are more important things to her than making music.