Richard Nixon would be "drummed out" of GOP today as a liberal: "He passed as much social welfare legislation as Lyndon Johnson" 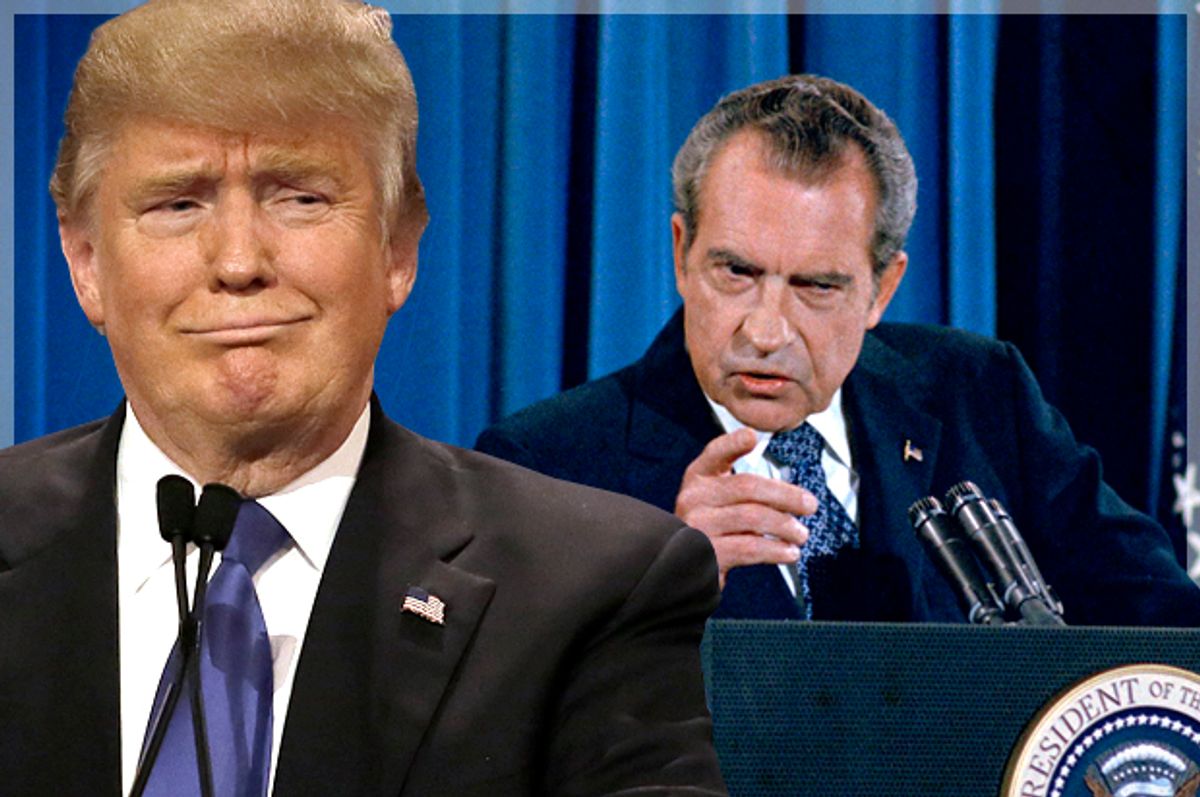 In February 1974, months before he resigned from office amid the Watergate scandal, Richard Nixon proposed Obamacare. He didn’t call it that — he called it the Comprehensive Health Insurance Plan — but the broad outlines of his proposal look awfully familiar.

The plan included a mandate that employers provide coverage to all full-time employees. It would have created a federal program called Assisted Health Insurance to provide coverage to everyone not covered by Medicare, Medicaid or an employer plan. And it would have included a panel of physicians that would control medical costs by “reducing needless hospitalization.”

The leading Republicans on the House Ways and Means and Senate Finance committees supported Nixon’s 1974 plan, which the New York Times said was “vastly more liberal than the one he introduced in 1971” that would have provided less comprehensive indigent care. Congress failed to act on the 1974 proposal — not because of Watergate but because the House Ways and Means Committee could not settle on one of three competing versions of the plan.

Nixon did, however, sign a long list of other progressive legislation, including the laws that created the Environmental Protection Agency and Occupational Safety and Health Administration. He expanded the reach of the Equal Employment Opportunity Commission. He put two justices on the Supreme Court who would later vote with the majority on Roe v. Wade.

Evan Thomas, a former reporter and editor at Newsweek, has written books about Bobby Kennedy, Dwight Eisenhower and Teddy Roosevelt. His latest, the biography "Being Nixon: A Man Divided," is just out in paperback. Thomas sat down with Salon to talk about Nixon in the 1960s and whether he would recognize the Republican Party of 2016. (Short answer: No.)

How factional was the Republican primary in 1960?

The primaries barely existed in 1960, and Nixon was essentially the designated heir that year.

Back then a candidate only entered the primary in a handful of states, right?

That’s right. Kennedy only entered the primaries in five or six states. Until 1968, the bosses ran the show. After 1968 blew up in Chicago, the parties gave up some of that control.

What was the demographic profile of Republican voters in 1960?

In 1960, there were Main Street Republicans like Bob Dole. There were Northeast moderate to liberal Republicans who were conservative on fiscal issues but liberal on social issues like John Lindsay and Bill Scranton. And that was basically it.

The John Birch Society types were still Democrats at that time.

The far right was such a small group. It mushroomed by 1964 with Barry Goldwater, but it was much smaller in 1960. Nixon hated the Birchers; they were way too far to the right for him.

The election in 1960 was very close, so Richard Nixon winning that year would not necessarily have represented a conservative mandate.

No. Nixon was a populist and played to people’s fears, and he could sound conservative when he tried to appeal to southern Democrats. But he was more often moderate in the tradition of Northeast moderates and believed the government had some responsibilities. If you look at his first term as president after the 1968 election, he signed a lot of legislation. Part of that was Democrats on Capitol Hill, but he believed that government had to govern. He passed as much social welfare legislation as Lyndon Johnson. He would get drummed out of the party today as a liberal.

So would Ronald Reagan.

And so would Reagan. The Republican Party have gone far to the right.

Between the 1960 election and the 1964 election, you have the Kennedy assassination, the March on Washington, and the police actions in Birmingham. Did those things provoke conservatives toward Barry Goldwater?

The anger on the right was always puzzling to East Coast establishment people like my parents. Where is the anger coming from? I think it came from where populism always comes from. When parts of the country feel disaffected and left behind and feel like the liberal elites are in charge, it makes many people angry. There was a feeling of gradual government creep from the New Deal through World War II, through the Eisenhower years, and through Kennedy. When the cities and the campuses started blowing up, conservatives really got angry.

Right. When Nixon ran for president in 1968 and again in 1972, he talked about permissiveness and the idea that churches were crumbling and the military was crumbling. Everything was getting lax and loose and permissive. Nixon tapped into that fear and rode it into power, but he didn’t govern that way. He was more interested in confounding his enemies, and sometime that meant doing it to the left.

Was Goldwater’s nomination in 1964 more about retrenchment or more about ideology?

I think 1964 was more about ideology and 1968 was more about fear. People had gotten very anxious over cities burning and campus protests and the Vietnam War.

Do you think the “take back our country” language that Donald Trump and his supporters use is a response to something particular?

It’s a lot of things, but a lot of it is about Trump cashing in on being against political correctness — that idea that you have to be super sensitive about minorities while poor white males are getting the shaft from the system and from Wall Street. People think that comes from liberal elites. He appeals to lower-middle-class whites who feel like they’re getting screwed.

Also, the coarsening of our culture has made Trump’s bullying acceptable. It’s OK to brag and boast and bully. People like that. You used to see more value placed on modesty and humility. Trump violates those norms, and he’s rewarded for it.

Why do people want a presidential candidate to be like that?

I think people are growing up in a culture where that’s normal. It’s the way things are, and you can get ahead by pushing people around.

Did populist sentiment factor into the elections from 1960 to 1972?

A little bit. Populism has been there for a long time, but it’s never gotten to 51 percent. What’s amazing about this election cycle is that there’s a chance that raw, nativist populism could get to 51 percent. I don’t think that’s going to happen, but the success of Donald Trump and Bernie Sanders suggest that the sentiment is stronger, maybe, than any other time in our history.

I wonder if part of the difference between this year and the last two elections is that there were consensus moderates and diffuse far-right candidates in 2008 and 2012, and this year it’s the opposite.

Romney certainly benefitted from the far-right candidates beating each other up.

Do you see Nixon and Reagan as pragmatist presidents?

Oh, definitely. They were people who could deal with the other side. Reagan worked with Tip O’Neill on tax reform. Nixon made all sorts of deals on Capitol Hill.

People who support Donald Trump and Ted Cruz really seem to want a president who will not make a deal with anybody.

We’ve seen that from the rejectionists in the House for the last few years. It was enough to bring down a Speaker.

They can’t compromise because it means giving President Obama something he wants — even if it’s what they want.

I’ve covered Congress for many years. In the 1980s, congressmen socialized with each other. Now, they all live in their districts and commute to Washington. They used to drink and whore together — there was [the Quorum Club] at the Carroll Arms Hotel that was run by Bobby Baker, one of LBJ’s aides.

The Carroll Arms Hotel was used by Democrats and Republicans. Sen. George Smathers was a Democrat, and he would lead the bipartisan drinking and whoring. Sen. Chris Dodd once told me that the worst thing that happened to Congress was when they started getting unlimited flights back to their districts. It used to just be a few trips a year. Nobody lives in Washington today.

And money is a bigger factor now.

The worst part of that is the time they have to spend raising the money. They’re over at their party headquarters dialing for dollars every day. I don’t think it’s the expenditures as much as the sheer amount of time that makes congressmen more dependent on interest groups.