They can only punish the woman: This is the truth about enforcing illegal abortion — charging the doctor is just a right-wing myth

Illegal abortions are done with pills, meaning there's no way to enact the "punish the doctor, not the woman" plan 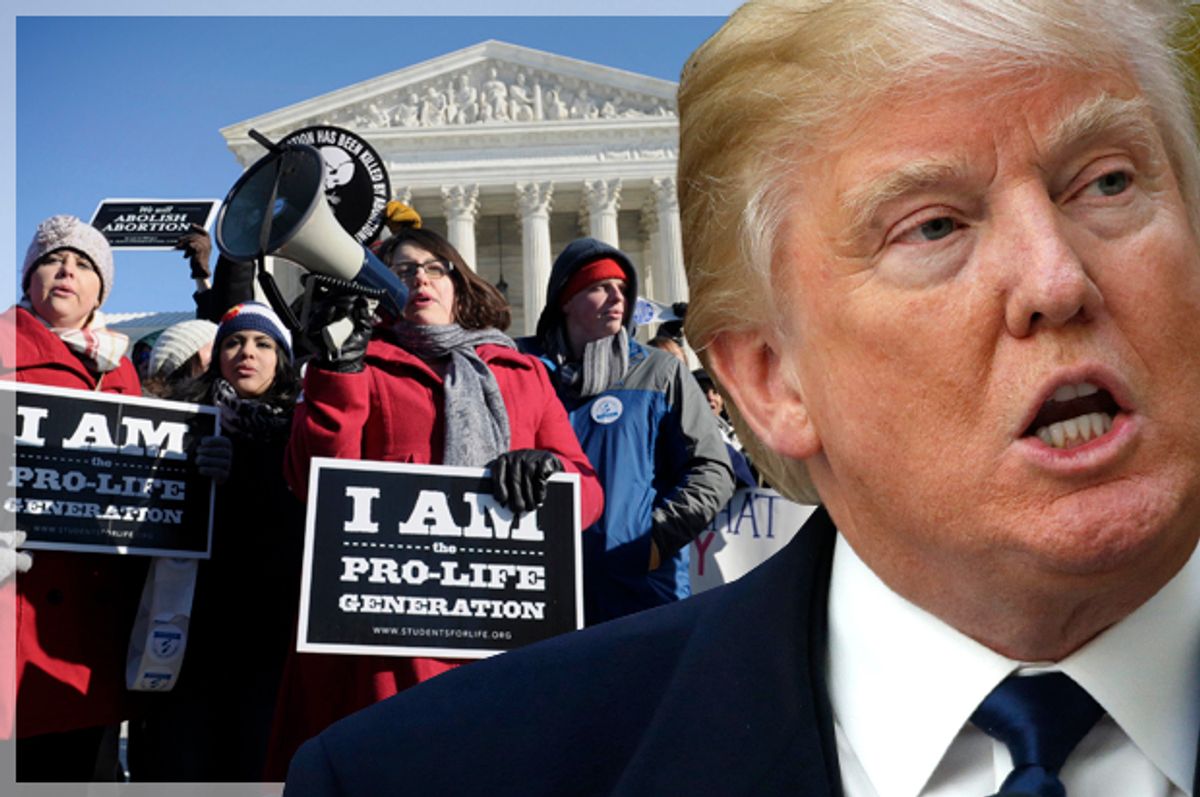 Last week, Donald Trump's comments about wishing to punish women who have abortion spurred a round of aggravating religious right propaganda, as various anti-choice organizations and politicians postured about how they would never punish women, and only want to punish doctors. Eventually, Trump himself came around to the punish-doctors-not-women line, an atypical walk back from a usually stubborn candidate.

But the punish-doctors-not-women line is aggravating not just because it's a blatant lie — anti-choicers are already punishing women and intend to do so even more — or even because it's based on a grotesque assumption that women are, as a class, too stupid to handle the basic abortion decision. It's also because there is literally no way to enforce an abortion ban that doesn't involve arresting the woman.

That's because most black market abortions do not involve someone performing the abortion, doctor or otherwise. There are no back alleys or secret clinics. The "abortionist" in the vast majority of these abortions is the woman herself, which she does by swallowing some pills.

Which means there is no one else to punish but the woman. Anti-choice activists know this, which is all the more evidence that their claim to want to punish doctors and not women is a lie.

(Not that wanting to punish doctors is a good thing, either. Providing abortion to women who need it, despite the threats and harassment and marginalization, makes abortion providers heroes, not villains.)

Anti-choice propaganda pretends that this is still the 1960s, where women had to turn to "back alley" abortionists if they couldn't get safe, legal abortions. But one major thing has changed since those days: Doctors discovered that misoprostol, a drug used to treat ulcers and some gynecological problems, is effective at expelling pregnancies, especially in the first trimester.

In the U.S., misoprostol is prescribed along with mifepristone in a two-step process to end a pregnancy without surgery. However, as women all over the world, especially in countries where abortion is banned, have figured out, misoprostol usually works just fine on its own, by expelling the contents of the uterus. Mifepristone makes it more effective, but most of the time, it's not strictly necessary. Even in cases where the abortion is incomplete, a woman can show up to an emergency room and it will look no different, to the doctor, than a spontaneous miscarriage.

In other words, medication abortion, even in countries where abortion is illegal, is safe, effective, and can be done with the use of drugs that are commonly available to treat other problems. In many places, such as Mexico, you can even buy misoprostol over the counter. There is a healthy trade in the pill on the internet. (Even the vet pharmacy online has it.) The only real danger is getting caught, but even that is a relatively small risk, since the pills themselves are legal.

Under the circumstances, it's not a surprise that the back alley abortionist is quickly becoming a relic of the past. In much of Latin America, where abortion is often banned or highly restricted, misoprostol abortions have become normalized, even though there are periodic government crackdowns.

It's not surprising that this knowledge jumped the Mexican-American border, especially as more women in the U.S. find it hard to access legal abortion. A recent study by the Texas Policy Evaluation Project found that between 1.7% and 4.1% women of reproductive age in Texas — which adds up to 100,000 to 240,000 women — have tried to induce abortion at home. By far, the most common method was using misoprostol purchased on the black market or in Mexico.

Many of these attempts, whether successful or not, occurred before Texas's new anti-abortion law reduced the number of clinics in the state from 41 to 18. That's because, even before this new law, abortion was hard to get and expensive for a lot of women. Medicaid doesn't cover it and many insurance carriers don't. A bottle of pills for $40 is cheaper than paying a few hundred to a clinic. But many of the women who attempted it cited lack of access to a clinic as the reason, and so there's every expectation that misoprostol use will continue skyrocket in Texas and across the country where abortion is becoming harder to get. It's already so popular that the slang term "miso" has evolved to describe it.

And if abortion is banned? There's every reason to believe that, just as it is in Latin America, misoprostol use will explode and it will swiftly become known throughout American society that it is the way to get an illegal abortion. It won't be long until "miso" is an everyday slang term that everyone knows means "abortion".

Which puts a huge kink in the "arrest the abortionist, not the woman" plan that anti-choicers disingenuously claim to back. If you buy some miso off the internet or at a flea market or at a Mexican pharmacy, the abortionist is the woman. You can't even accuse the business that sold the pills of illegal abortion, since the pills have multiple uses. The best you can get them for is selling prescription drugs without a prescription.

The only way to enforce an abortion ban in the miso era is to arrest the women. That's what they do in other countries when women are caught getting illegal abortions. Since there is no doctor to arrest, the woman herself is tossed in prison. (In some cases, women have been imprisoned for miscarrying, because the doctor just assumed, without evidence, that it was a miso abortion.)

There's no real need to speculate at length, either, because it's already happening. In Pennsylvania, Idaho, and Georgia, women have been arrested for terminating or helping terminate pregnancies by using misoprostol. In Indiana, a woman named Purvi Patel was sentenced to a whopping 20 years in prison for terminating a pregnancy with misoprostol, even though there is no biological evidence she took the drug. Already anti-choicers are finding ways to imprison women for refusing to give their bodies over to grow a fetus.

Perhaps there's a way that anti-choicers could maintain the illusion that they're not interested in punishing women, even as they force more abortion onto the black market. After all, the "women are victims of abortion" argument could, in certain lights, be construed as arguing that a woman who chooses abortion is mentally ill. It's easy to see a situation where anti-choicers use the threat of jail to force women who are not mentally ill to be committed to "rehab" centers, run by Christian fundamentalists, that purport to "cure" them of this supposedly unhealthy desire to have sex without having babies. It may sound far-fetched, but the right has been doing this to gay teenagers for decades now, forcing them into unscientific "conversion therapy," and it's only been in the past few years that significant gains have been made in stopping them.