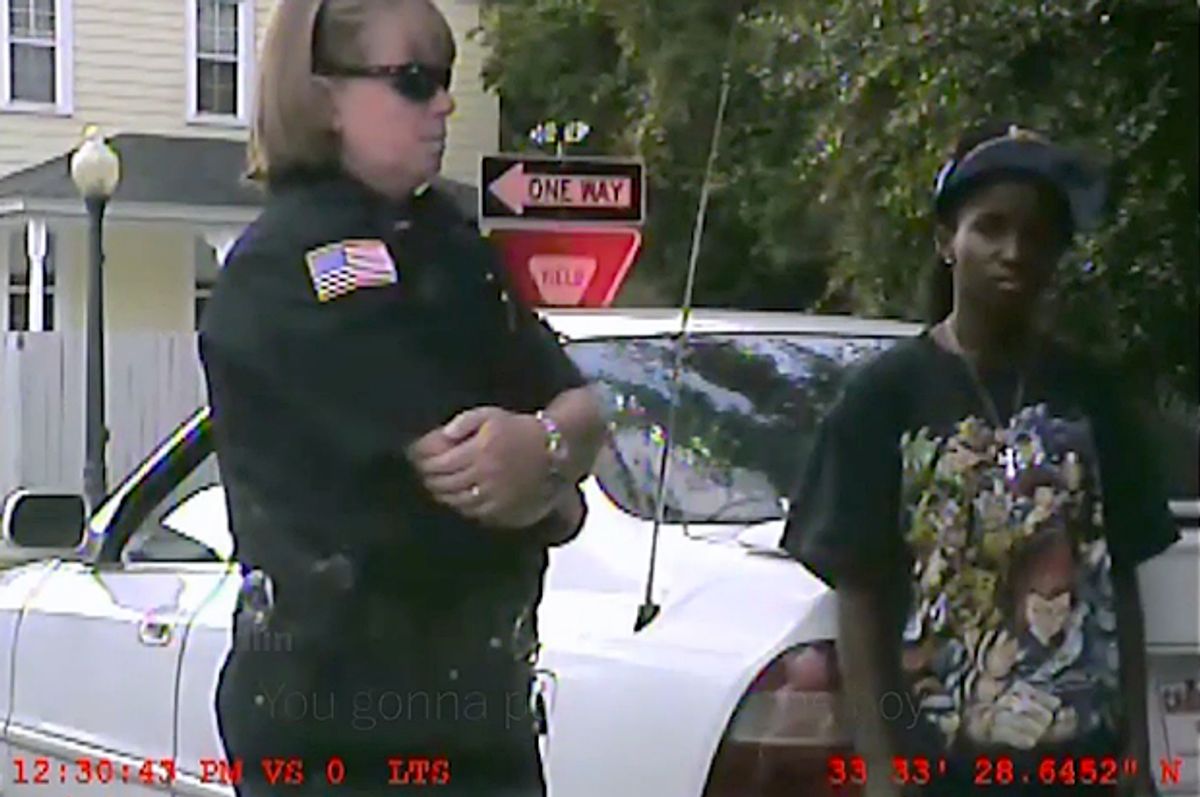 Two South Carolina residents have filed a federal lawsuit against the City of Aiken, South Carolina, which claims that police officers performed an illegal cavity search during a traffic stop. Video of the October 2014 inciden surfaced this week and was first reported by Radley Balko in the Washington Post.

The encounter began when Lakeya Hicks and Elijah Pontoon were pulled over by officer Chris Medlin of the Aiken Department of Public Safety. Hicks was driving the car, which she had recently purchased and still had temporary tags. Medlin explained that the "paper tags" were the reason for the traffic stop. Unexpired paper tags are legal in South Carolina, as Balko notes.

After asking Hicks and Pontoon for identification, which Pontoon, as a passenger, was not required to provide, Medlin ordered Pontoon and Hicks out of the car. Medlin explained to Pontoon that, "Because of your history, I’ve got a dog coming in here." Soon after, a K9 team arrived on the scene and began searching the car. “You gonna pay for this one, boy,” said Medlin.

"Now I know you from before, from when I worked dope," Medlin said to Pontoon later. "I seen you. That’s why I put a dog on the car." Pontoon has a criminal record including drug charges (though he has only one arrest for "failure to comply" since 2006), so it's possible that Medlin did recognize him from prior encounters. However, as Balko points out, Pontoon's personal history would not constitute probable cause to justify a traffic stop, much less a K9 inspection or the even more invasive searches that happened next.

After the police dog failed to find any contraband in the car, the complaint filed by Hicks and Pontoon alleges that a female officer who had arrived on the scene performed a strip search of Hicks, "pulling up her shirt and exposing Lakeya's breasts in broad daylight" while male officers looked on. The entire incident, the complaint says, took place "literally steps from the busy city-center of downtown on a Thursday mid-day afternoon." The search came up empty.

The complaint says that officers then anally probed Pontoon on the side of the road. The cavity search is not visible on the police dashcam video, but audio captures Pontoon telling officers that they are touching his hemorrhoids while an officer insists, "That don’t feel like no hemorrhoid to me." Once again, the officers do not to find anything.

"At no time," says the complaint, "did [the officers] attempt to get a valid search warrant for such an intrusive search or even at a minimum to take Elijah to a proper medical facility to have a proper medical professional perform the search."

After nearly 40 minutes, Medlin released Hicks and Pontoon with a "courtesy warning" but did not indicate an alleged offense. Hicks and Pontoon are black, while each of the officers who were at the scene are white.

“The City of Aiken denies the Plaintiffs’ allegations and is vigorously defending this lawsuit," wrote Aiken public information officer Capt. David Turno in a statement. "We will have no further comment about the facts of this case during the pendency of this litigation.”

Watch video of the stop acquired by the Washington Post below: