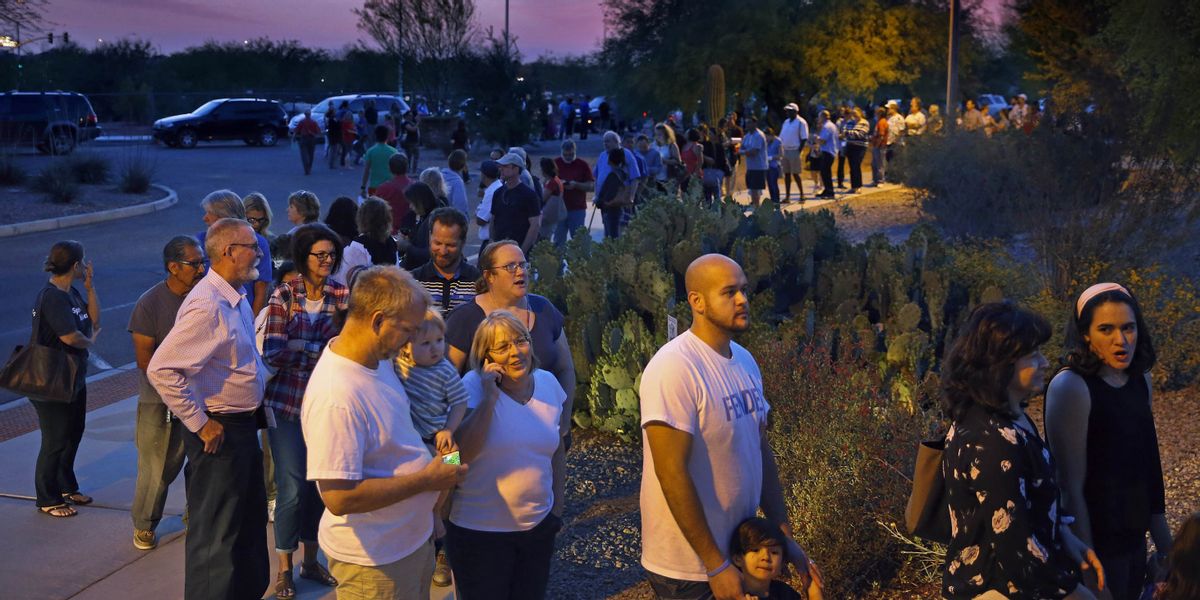 People wait in line to vote in the primary at the Environmental Education Center, Tuesday, March 22, 2016, in Chandler, Ariz. (David Kadlubowski/The Arizona Republic via AP) MARICOPA COUNTY OUT; MAGS OUT; NO SALES; MANDATORY CREDIT (AP)
--

A "We the People" petition on the White House website calling for an investigation into Arizona's primary election this year has reached over 200,000 signatories and looks to have actually sparked a federal investigation.

According to Maricopa County's Recorder’s Office, the Justice Department’s Civil Rights Division sent a letter last Friday asking for specific data on the number of polling places cut and the reason(s) why they were cut. In 2012, Maricopa County had 600 polling precincts but cut that number down by more than two-thirds to just 60 four years later in 2016.

“We have no problem cooperating with them, so we should have that over to them over the next couple of weeks,” Elizabeth Bartholomew, communications manager for Maricopa County's Recorder's Office told the Huffington Post on Monday.

Thousands of Arizona residents were forced into incredibly long lines on March 22, with some voters still in line well after the respective primary winners were declared in the state. Maricopa County's decision to drastically cut polling locations meant there was only one polling place per 21,000 residents of the highly populated Phoenix region -- home of most of the state's population.

And while nearly 1 million voters Arizona voters were eventually able to cast a ballot, some after waiting in line for five hours, countless others were turned away at the voting booth because their party affiliation change had failed to be reflected at their precincts. Some voters who had registered as Democrats showed up to the polls only to find their status changed to Independent, while other voters who had changed their status by the official deadline from Independent tin order to vote in Arizona's closed election were told their status had actually not changed. And still other voters claimed to have received new voter ID cards in the mail on Election Day, only to be informed that they had somehow been placed in a new district and thus with a different polling place.

All indications are the move to cut access to voting places was a Republican cost-cutting measure, all though more nefarious causes are undoubtedly up for investigation. The Republican in charge of organizing elections for Maricopa County, Helen Purcell, has said she expected more residents to vote early by mail, thereby reducing the need for more election precincts.

“I can’t go back and undo it. I wish I could but I cannot,” Purcell said during an Arizona House Elections Committee hearing on the disastrous election. “I made a giant mistake.”

But in a letter calling for a federal investigation, Phoenix's Democratic Mayor Greg Stanton noted that Purcell and her office “distributed fewer polling locations to parts of the county with higher minority populations,” pointing out that the city of Phoenix proper actually faced a much worse one polling place for every 108,000 residents.