In an epic Littlefinger-style move, he and House Jenner-entangled Blac Chyna appear to have announced an engagement 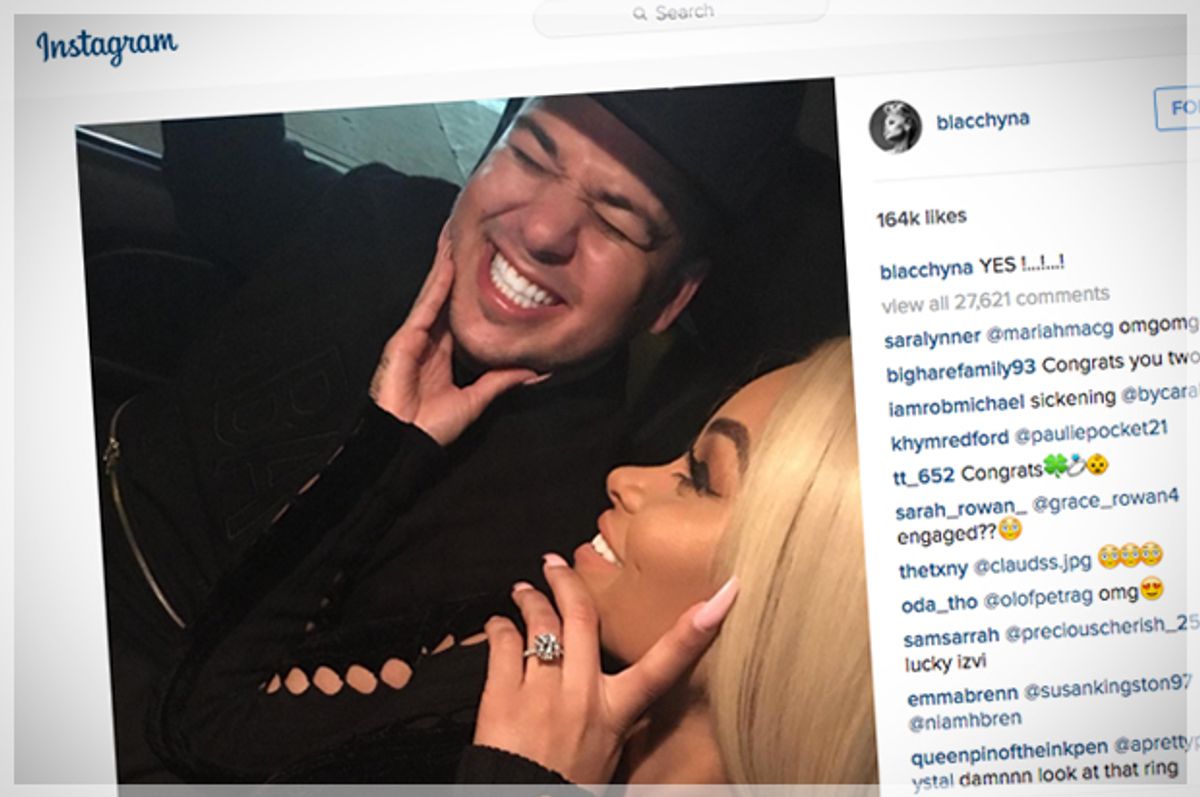 If you consider the possibility that the Kardashians and Jenners and all their satellite spouses, exes, allies and enemies are basically a modern, dragon-free version of "Game of Thrones," Rob's always been the dark horse. Let the K-named sisters gobble up all the Internet breaking magazine covers, all the Piers Morgan vituperation, the successful apps and sold out lip kits. It's Rob — one part Samwell, one part Littlefinger — who may just be the greatest of the whole clan. And let that meteorite-sized engagement ring he bestowed this week on Blac Chyna be beginning of a glorious new dynasty.

In a sincerely adorable Instagram post early Tuesday, Blac Chyna shared an image of her looking lovingly at a beaming Rob, her manicured left hand sporting a serious diamond, and the simple caption, "YES !...!...! " A video of her blinding a crowd of well-wishers as she flashed her ring while Rob wiped away tears also quickly made the rounds.

Though that one word, "yes," has thus far constituted the entirety of their statement on their relationship status, it's already set off a frenzy in the celebrity-verse. For starters, the model and entrepreneur was formerly engaged to rapper Tyga and has a three year-old son with him. Tyga is currently dating Rob's 18 year-old half-sister Kylie Jenner. Last year Chyna — who has also been friends with Kim Kardashian in the past — took to Instagram to seemingly mock the then underage Jenner and her famous lips. Then, this past winter, just around the time Kim's husband Kanye West was beefing hard with his ex Amber Rose on Twitter, her buddy Chyna was cryptically posting an image of Rob's recognizably tattooed arm, and the caption "The beginning."

A few days later, she was arrested at the Austin-Bergstrom International Airport and charged with public intoxication and drug possession. (Rob's family has denied rumors he's spent time in rehab for drug and alcohol issues.) Just two months later, the tabs were reporting the two had broken up — with Rob apparently deleting his Instagram photos, including one of a sleeping Chyna that read, "Love this woman right here so f--k y'all with your negative comments."

Now, however, it's all back on, at least for now. (You may want to take any "save the date" notices as a loose suggestion.) With a ring that suggests that being a sock entrepreneur has been very lucrative for the Kardashian brother, and more potential drama than even Kanye and Lamar combined could cook up, all that can be said is, well played, you two. You're the royal couple America has earned itself. And whatever you do from here on in, I'm sure you've already got the TV series about it all lined up.