As Wisconsin gets ready to vote in today's big primary, it behooves us to remember what this state has become 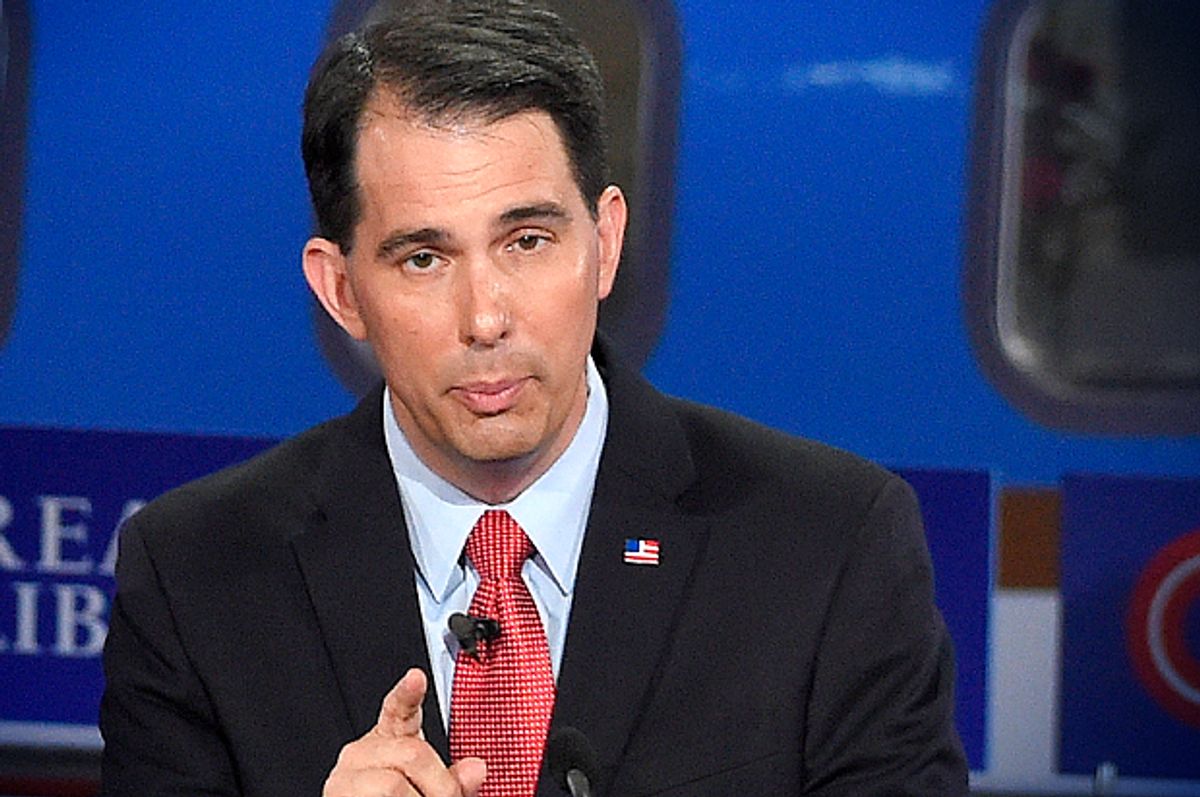 Pity Scott Walker and the Republicans of Wisconsin. Here they have taken the time and energy to gain power partly by using racial dog whistles, and along comes a group of white nationalists to make the once-implicit coded language suddenly explicit. And it’s happening just as the political world turns its eyes to the state for today’s big primary. With a voter-ID law passed by the GOP-controlled legislature and signed by Walker and threatening to disenfranchise hundreds of thousands of mostly minority voters in this election, the last thing the Koch brothers’ favorite governor wants is people who are going to say the quiet parts out loud.

Which is why Walker on Monday was condemning the robocalls from the American National Super PAC and its white nationalist founder William Johnson that have been flooding landlines in Wisconsin over the last few days. The call -- narrated by an elderly woman in the soothing tones of your racist grandmother complaining over Sunday dinner about her new black neighbors -- assures listeners that Trump “will respect all women and help preserve western civilization.” In the world of white nationalists, this is code for “Will keep the hordes of Latino immigrants and black welfare cheats from stealing your tax dollars and destroying America as you know it.”

As racist robocalls go, this was fairly mild, at least compared to Johnson’s efforts in earlier primaries. But it is worth noting that Walker’s upset, if only for the irony. After all, the lightning rod of a governor, a man so dull his idea of spicing up his food probably means pouring castor oil on it, built his power base in the state in the almost-exclusively-white suburbs of Milwaukee, one of the most racially polarized metropolitan areas of the country.

The New Republic took a deep dive into Walker’s world two years ago. What the magazine found was a city and its suburbs even more segregated than most, where the chairman of one county’s Republican Party could still refer to one mostly African-American neighborhood in Milwaukee, in 2014, as “the colored section.” Where white flight between 1960 and 2010 was so high it tripled the population of three formerly rural counties around Milwaukee, while the percentage of African-American residents in those three counties is under 2 percent. Where the black poverty rate within the city is the second-highest in the country.

This is the world that has coddled Walker as he traveled up through the ranks of the Republican Party. As a member of the state Assembly, the executive of Milwaukee County, and now governor, he has spent his entire career deeply slicing budgets for programs that benefit inner-city African-Americans, such as public transportation. He has also pushed for private-school vouchers that decimate public education and advocated for privatizing prisons, all while cutting taxes to ensure that funding levels for these civic outlays are unlikely to be restored anytime soon, if ever.

He has done all this in a climate of racial polarization fueled by talk-radio hosts like Charlie Sykes (whom Donald Trump, ironically, ran afoul of just last week). Local talk radio, according to the New Republic story, traffics in the same sorts of white resentment politics that have fueled the rise of national stars like Rush Limbaugh over the last thirty years. Talkers like Sykes (who regularly refers to Michelle Obama as “Mooch”) have grown rich spewing racial divisiveness. And one of their most regular guests, throughout his long career in Wisconsin politics, has been Scott Walker, who would verbally wink at Sykes’s listeners while talking about policies that would never harm the host’s mostly white audience.

Given this environment, why wouldn’t a white nationalist like William Johnson think he has found some fertile territory to shill for Donald Trump, who is basically one white bedsheet and pillowcase with eyeholes away from being a KKK Grand Wizard?

Yet Walker and some of his allies in the local media have rallied to condemn Trump as a big-city know-nothing, a polarizing figure whom Sykes, in what surely will enter the pantheon of history’s least self-aware statements, complained is failing to adhere to Wisconsin’s “tradition of civility and decency.”

That this is all happening during the first election in which Wisconsin’s new voter-ID law is in effect only increases the irony. The law is part of the broader effort by Republicans both in Wisconsin and other states to limit the voting power of traditional Democratic constituencies. The Wisconsin law could disenfranchise as many as 300,000 mostly minority and student voters who want to cast votes today. Since this law is only possible because the Supreme Court eviscerated the Voting Rights Act, which was first passed to protect the voting rights of minorities, it is impossible to see it as a colorblind act that, as defenders of voter-ID laws so often tell us, is only here to protect against nonexistent voter fraud.

Of course it is unlikely that Walker and his allies see themselves as racists. But that does not change the racist effects of the laws they pass and the poison they spew at Milwaukee’s suburban commuters as they sit in traffic on a daily basis. Donald Trump has simply taken this inherent racism and brought it out into the open. In doing so, he has attracted the support of outright racists – excuse me, “white nationalists” – like William Johnson, and all of a sudden Wisconsin’s Republicans, like many party members nationwide, are doing their best impression of Captain Renault, proclaiming themselves shocked, SHOCKED to discover there is gambling going on here. Their act would be a lot more believable if they had not spent their careers advocating for a worldview that, stripped of the code words and dog whistles, is nearly indistinguishable from the one they now decry.