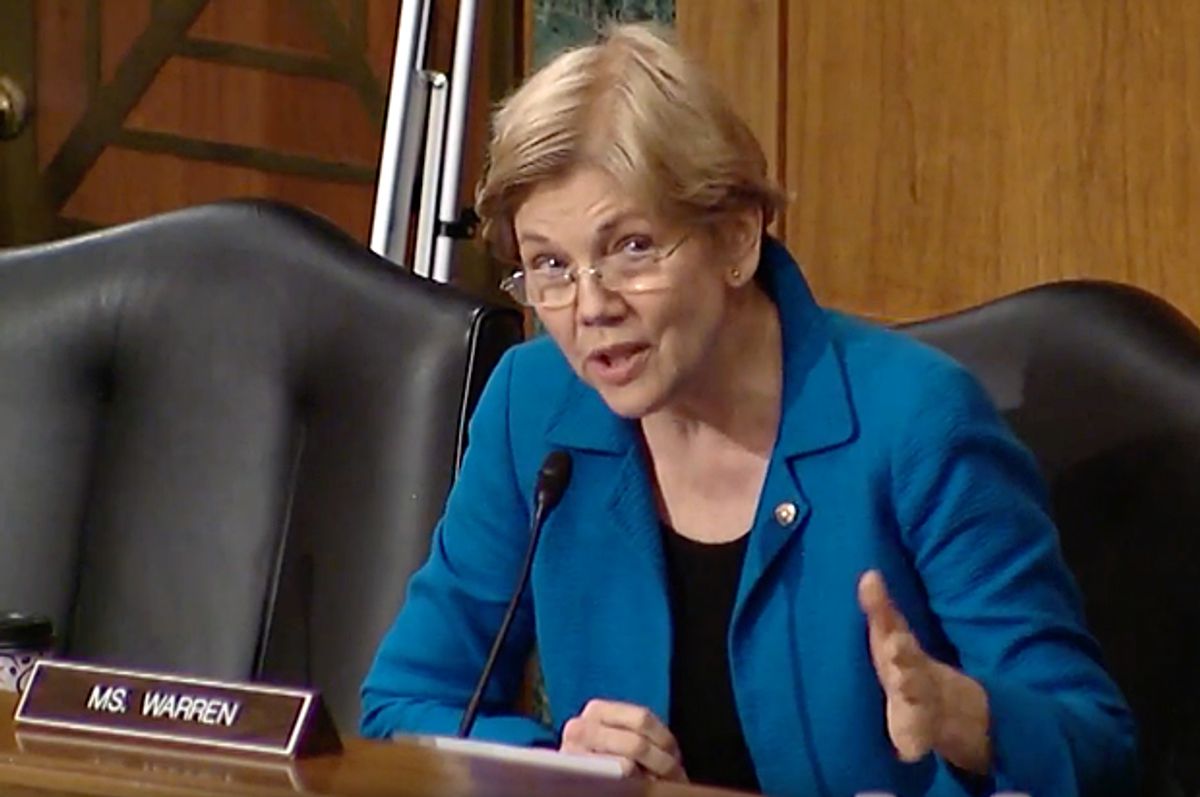 Sometimes, Republicans in Congress decide to do their jobs.

On Tuesday, Senate Republicans on the Banking Committee decided to finally hold a hearing to "assess the effects of consumer finance regulations"-- little more than another attempt to rail against Wall Street regulation like the Dodd-Frank law. Ostensibly, the hearing would have granted Republicans the opportunity to shed their "do nothing" image while simultaneously continuing to espouse their mantra of deregulation. Too bad Elizabeth Warren also showed up for her day job on Tuesday, completely eviscerating the Republicans' main witness and destroying their tired talking points.

"Of all the people who might be called on," Warren said of Republicans' lead witness Leonard Chanin, former Deputy Director of the Division of Consumer and Community Affairs at the Federal Reserve Board, "I am surprised that my Republican colleagues would chose a witness who might have one of the worst track records in history on this issue."

Chanin, Warren pointed out, "helped lead the Federal Reserve division that refused to regulate deceptive mortgages — including the subprime lending that helped spark the crisis." Warren noted that the bipartisan Financial Crisis Inquiry Commission called Chanin's lack of oversight while at the Federal Reserve a “pivotal failure” and the “prime example” of the kind of hands-off regulatory approach that allowed the crisis to happen.

"You did essentially nothing," Warren told Chanin, who has since left the Federal Reserve to work for a private law firm advising big banks. "Now, your failure had devastating consequences." Chanin was brought forth by Republicans to argue against regulations like those imposed by Dodd-Frank.

"There was simply no data presented to the Fed on a statistical basis that suggested that there was a meltdown in the mortgage market in 2005 or 2006," Chanin offered in his defense.

"I'm sorry, are you saying there were no data in the lead up the financial crash that showed the increasing default rates on subprime mortgages and what they were doing to communities across America? Did you have your eyes stitched close," a clearly incredulous Warren interrupted.

"There was anecdotal evidence to be sure," Chanin replied.

"Oh my god," Warren let out in exasperation. "If you are still defending your time at the Fed," Warren said to Channin, "that raises even more questions about your judgement."

"So when you talk now about how certain regulations are too costly or too difficult to comply with, you sound a lot like you did before the 2008 crisis when you failed to act. So my question is, given your track record at the Fed, why should anyone take you seriously now?"

After Chanin refused to answer Warren's question about his vision of proper financial regulation not once, but three times, the Massachusetts Senator really let him have it.

Watch Warren's glorious takedown of Chanin and Republican's zombie calls for deregulation below: