How "American Idol" destroyed itself: The reality game show changed the rules for music — and made itself obsolete

"American Idol"'s legacy isn't just the talent it discovered, but in how it shaped how fans and artists interact 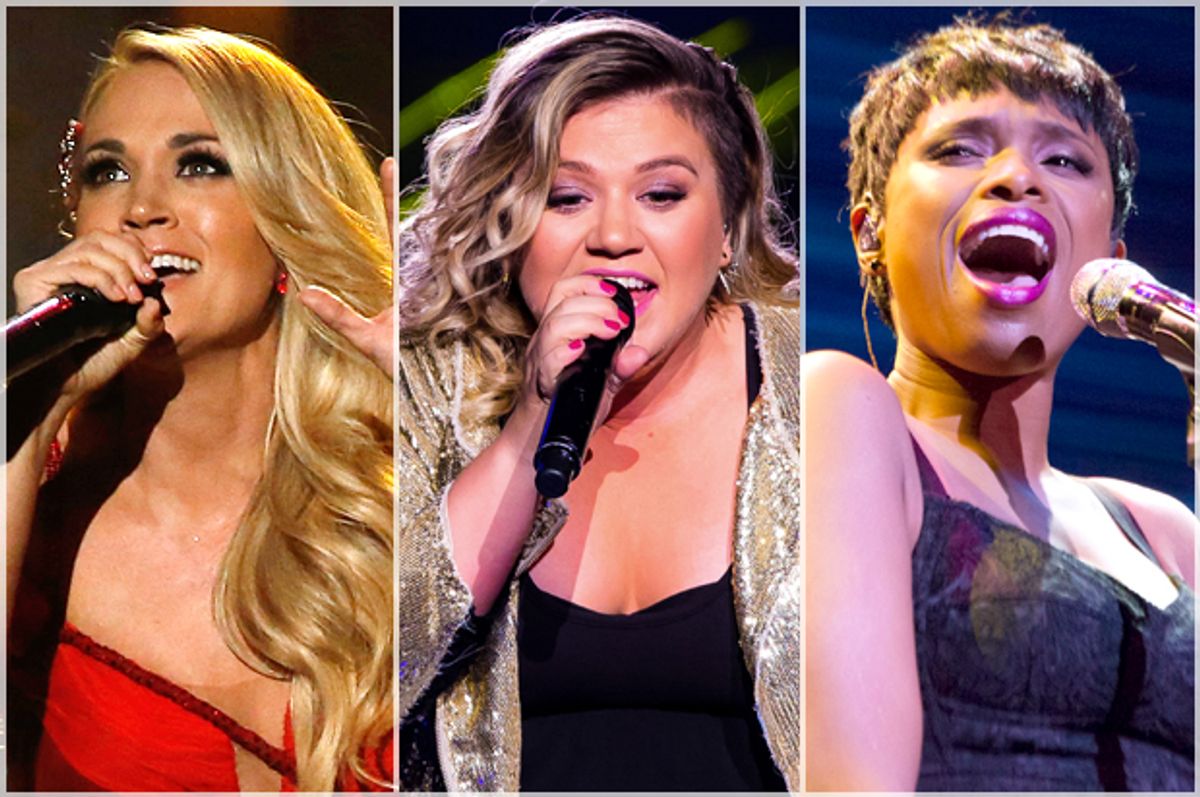 In the summer of 2002, I was in a weird netherworld between college and real life, residing at home with my parents in Ohio while saving money and waiting for a Boston lease to start in September. Restless and out of sorts, I found stability and comfort from religiously watching the first season of "American Idol." The format of the show was addictive: Judges Simon Cowell, Paula Abdul and Randy Jackson played off one another and analyzed vocal performances—acting as the id, ego and superego, respectively—while each week, viewer votes and preferences would whittle down the talent field, one by one. By the time early September rolled around, I had moved east—and I recall anxiously making sure I had a functional TV so I could tune into the finalé, which Kelly Clarkson famously won over Justin Guarini.

Nearly fourteen years later, I'm in a much different place in life, and so is "American Idol," which is winding down after fifteen seasons. In fact, the final episode airs on April 7, and it will crown one last winner—chosen from finalists Trent Harmon, La’Porsha Renae and Dalton Rapattoni—and feature appearances from past winners Clarkson and Carrie Underwood. Those two women represent arguably the show's biggest success stories, with the latter a huge country star and the former a beloved, multiplatinum pop favorite. However, the show has also spawned plenty of singers who've carved out decent musical careers, across all genres: hard rock (Chris Daughtry), folk-pop (Phillip Phillips, Kris Allen), country (Bo Bice, Scotty McCreery), blues-rock (Crystal Bowersox), R&B (Jordin Sparks, Fantasia, Ruben Studdard) and soul (Clay Aiken, Taylor Hicks). And then there are multi-hyphenates such as Jennifer Hudson, Adam Lambert and Katharine McPhee, who have found success in music and acting, or Kellie Pickler, who won a season of "Dancing With The Stars."

That "American Idol" actually accomplished one of the things it set out to do—find and celebrate new talent—remains an integral part of its legacy. The track record of other U.S. singing competition shows is hit-or-miss: "The Voice" hasn't been as strong, despite drawing from a deep talent pool, although current pop darlings Fifth Harmony are alums of "The X Factor." (Internationally, things are much different, as both One Direction and Little Mix are reality music show alums.) Pre-fab pop music, whether formed by a TV show or a label, has always been stigmatized as being somehow less authentic or even fake. Although "American Idol" didn't completely erase this perception, it did wonders to underscore that it doesn't matter how or where a musician was discovered, as long as the talent is there.

As a Stereogum post on the show points out, "American Idol" also revolutionized TV, in that it "hybridized two primetime mainstays, the game show and the reality show, creating a genre that has flourished to the point that we now accept it as one of the foundational pillars of primetime programming." Early in its tenure, this combination also produced big ratings for Fox, a sign that the show's underlying, addictive conceit—watching regular people possibly be plucked from obscurity and elevated to stardom—had vast mass appeal. It's easy to see why: "American Idol" first and foremost appealed to the collective, enduring affection people have for fairy tales. The show craftily let viewers learn about the personal lives of the contestants (albeit in a shiny, packaged way), which made for good TV and made them relatable. As a result, people were invested enough to pick up a phone (and, later, text) in support of a favorite singer. No wonder so many contestants developed loyal fanbases who, even to this day, follow and support their own idols.

Although that same Stereogum article criticizes the show because it didn't change music, "American Idol" reflected tastes more than it refracted them. That often led to unpopular winners and early exits for favorites, of course, as well as accusations of voter racism and criticism when the show was suspected of trying to steer the results by employing ringers. But the ideals held up by "American Idol," that people have the ability to choose and support favorites, are influential. Sure, things could get dicey in terms of post-show success, but because the initial boost comes from popular support, not beancounters or Svengalis, there's at least the illusion of power in play. This idea would soon saturate the way we consume media, and it explains why the show became an online phenomenon, with writers and fans dissecting the show's every move on message boards and blogs. Indeed, it's important to remember the time period in which "American Idol" started was very different: Napster was kaput, Friendster was the charming online network of choice and MySpace was still several years away from widespread popularity. In other words, the show was pre-everything social and viral—e.g., Twitter, Facebook, YouTube, Snapchat, Vine.

"American Idol" was a casualty of the monoculture implosion as much as anything else. But as the show progressed, it also reflected pop's growing musical conservatism. Maura Johnston, one of the most incisive "Idol" analysts, pointed out this trend in a crucial 2015 Deadspin piece, "Wimpy White Dudes With Guitars Ruined 'American Idol,'" which examined the show's impact. "Indeed, recent seasons of 'Idol' were most defined by viewers hellbent on keeping a particular, and somewhat archaic, strand of pop alive: those who would, through hell or bad reception, unfailingly text their support for the most Jason Mrazian of the bunch," she wrote, adding a few sentences later, "These singers got their very own acronym from 'Idol' watchers—WGWGs, for White Guys With Guitars—and made the prospect of Another R&B Song Getting Covered In A Gimmicky, Overly Caucasian, YouTube-y Sorta Way grimmer and more inevitable by the week."

That "American Idol" started to cling to and rely on reactive traditions points to several things. Johnston notes the "gap between the show’s graying demographics and the ever-younger pop market" which "would only increase as the years went on: Singers who got too modern or adventurous were dispatched earlier and earlier." And despite attempts at freshening up the show—cycling in new judges, switching up the format of elimination rounds—its basic premise remained static. That's not always fatal: After all, shows such as "South Park" and "The Simpsons" continue to enjoy long runs on TV with the same general framework. However, in the time since "American Idol" premiered, the media and music worlds have evolved significantly. People don't need the judges to be the critical mouthpieces anymore, because there's Twitter for live-tweeting their own snark; technology enables ambitious, talented musicians to create their own careers on Instagram, Vine or YouTube; crowdfunding sites and Bandcamp empower people to seek out and financially support favorites without interference. "American Idol" became passé, a quaint novelty of a time when a TV show had to manufacture a competition to find musical talent.

Even the "American Idol" contestants themselves became empowered by the choice championed by the show, pushing back against perceived creative meddling (Clarkson's well-publicized battles with Clive Davis over musical control), label indifference (season 13 winner Caleb Johnson, who left Interscope and told Billboard he wanted "a deal with a new label that’s actually going to support me") and the management and label restrictions built into the contracts signed by contestants. Now more than ever, artists don't need to depend on the "American Idol" machine for notoriety or success: They can use the show as a springboard for bigger and better things. In the end, Frankenstein's monster ended up not only destroying its doctor—it made him obsolete.