Jesse Eisenberg loves his "mercurial" roles: "It's wonderful to perform in a way that the authenticity of the character is of paramount concern" 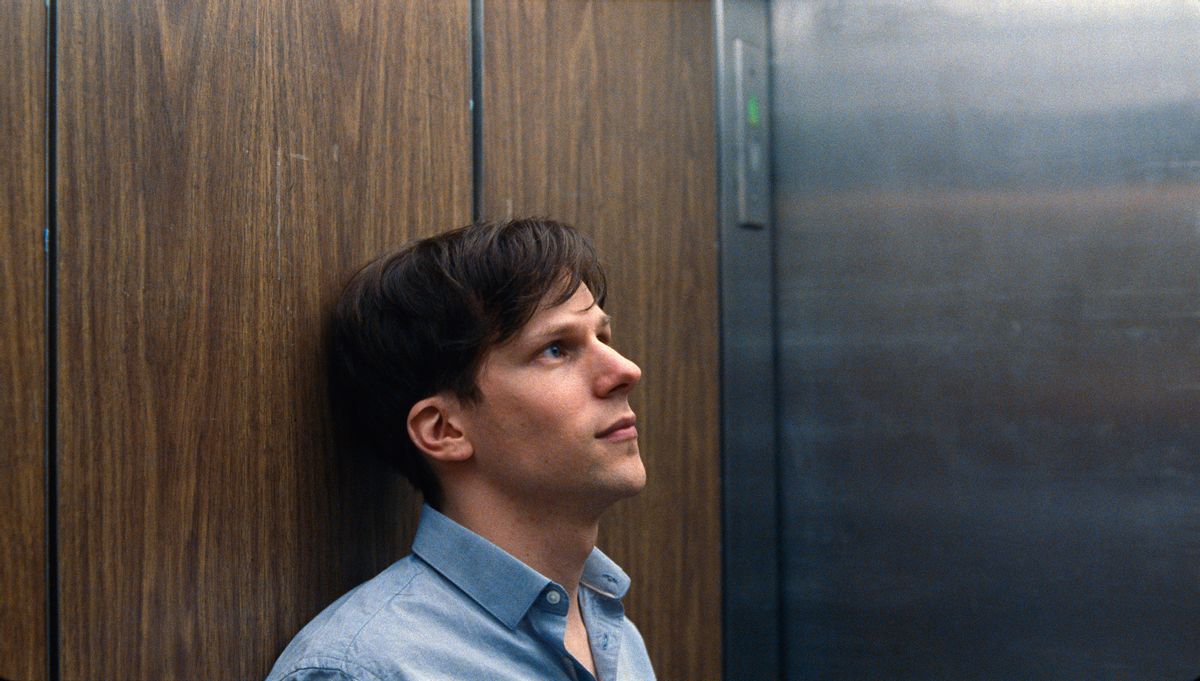 This image released by The Orchard shows Jesse Eisenberg in a scene from "Louder Than Bombs." (The Orchard via AP) (AP)
--

It is easy to pigeonhole Jesse Eisenberg as a smug know-it-all, not unlike many of the characters he plays: Mark Zuckerberg, in “The Social Network,” David Lipsky in “The End of the Tour,” even Lex Luthor in “Batman v. Superman: Dawn of Justice.” But that would be wrong. The hyperverbal Eisenberg is far more respectful and considerate of others in real life. He is down-to-earth, apologetic, and humble. Eisenberg does exhibit some coyness, but it’s not calculated; more self-censoring.

In the new film, “Louder Than Bombs,” Eisenberg plays Jonah, who has just become a father as the film opens. However, he almost immediately abandons his wife and newborn to be a dutiful son and return to his parent’s home to sort through the photos of his late mother, Isabelle (Isabelle Huppert) a war photographer.

In his father’s house, Jonah slowly re-connects with his sullen, teenage brother, Conrad (David Druid) and has some touchy discussions with his dad (Gabriel Byrne).

While Jonah frequently behaves callously in the film, there is, it appears, a lack of control regarding his character’s emotions. Eisenberg’s subtle performance conveys Jonah’s insecurity adroitly. An early scene has Jonah tentatively smiling in an elevator while running out to get food for his wife, who just gave birth. Is he smiling because he is a proud father, or pleased to get away from his tired, hungry wife?

Viewers will likely recalibrate their perception of Jonah by the film’s end. Eisenberg reveals a character far more troubled as he comes to know more about his family members. It is an affecting performance in a film that sneaks up on viewers by frequently shifting perspectives and narrative direction.

The actor chatted with Salon about family, choices, and perceptions.

Jonah is the first time you have played a parent on screen. What are your thoughts on parenthood and family, both in “Bombs” and in real life?

I have siblings, so I know the complicated views of family members and what it means to be saddled for life with them. The movie presents a view of how we see our family members in intimate, inaccurate, and forgiving terms. “Bombs” is set after a tragedy, so it’s not depicting the histrionic reaction by the family, or the dissolution of what you imagine it to be, rather, it is about the hope to find some kind of comparative harmony. The film is conceived in scenes that take place in first and third person narratives, so you view these characters in private moments, but also when they are being spied on by their own family members. “Bombs” is about this manipulation of perspective in order to show the audience different sides of the family.

Speaking of shifting perceptions. You tend to be typecast in hyperverbal, know-it-all roles. How do you want people to perceive you?

I have no personal feelings on how I’d like to be perceived, or any clearly articulated thoughts about that. I feel embarrassed when someone other than myself summarizes my personality. It’s always an inaccurate rather than objective look of who I am.

You also have a big budget blockbuster like “Batman vs. Superman” out one week, and an indie film like “Bombs” made by a foreign director out two weeks later. Do you feel you have to make deliberate career choices?

My job doesn’t change based on the nature of the budget. It’s a thrill to play a lead character on the scale of “Batman.”

I like a line one of the characters in “Louder Than Bombs” has about choice, in that you can make a choice, but you can’t plan what happens after you choose. Do you feel that Jonah makes bad choices? Do you think he has regrets?

That’s right. What the film does so well is create characters behaving in amoral ways. They have a lack of closure. I like to play a character with mercurial behavior. As long as you don’t have to further the plot, it’s wonderful to perform in a way that the authenticity of the character is of paramount concern, and the story is dictated by their behavior.

Do you have any regrets about a choice you made in your life or career?

I can probably list a dozen in the last hour. I find it’s difficult to navigate being in the public so well. One the one hand, it’s wonderful that people see something I’ve been in. But I feel nervous I’ll misspeak, and that stuff ends up generating regret.

Speaking of regret, the film is very much about characters coping with trauma. Jonah certainly alters his behavior as he learns things and observes his family members.

Yes, the character is living in a gray area where he doesn’t understand his own behavior. It’s hard to play ambivalent. It’s more mercurial, but it’s also a lot of fun. You have conflicts, and in this film, he’s looking forward to adulthood. He loves his wife, but he’s insecure about a family tragedy he’s not dealt with it in an appropriate and thorough way. As an actor, it’s interesting to play both sides of that—the typical reaction [to trauma] in stories, and how we like watching heroic reaction to tragedy. But it’s challenging to decide which way to go—darker, less morally righteous reaction to decisions.

I’m a playwright, and my most recent play has a character who is disturbed at best and despicable at worst. While his reactions are not kind, or outward thinking, as a result, they seem more authentic.

Agreed! I like that Jonah lies to his wife during a phone call and then, in the same scene, delivers a painful truth to his brother. What are your thoughts about honesty, and little white lies?

If the film is an accurate depiction of indirection, I think people lie for their unconscious need to save oneself. Jonah lies because he is having trouble coming to terms with the reality of his circumstances. He’s not thinking of his honesty, or a potential uncomfortable social interaction but to live in the delusions that allow him to exist every day. You don’t know if the character is acting out of selfish reasons. Is he yelling at his brother, his former self, or his current self? He had to abandon his family and wife he loves [to return home]. He has been prematurely thrust into adulthood. It could be that he’s censuring himself. Is his behavior stemming from his abdication of responsibility?

In the film, Isabelle talks about her passion to take photos. Conrad writes what Jonah calls “weird and amazing” essay. What is your passion? What is something weird and amazing that you do?

I am more on the "weird" than the "amazing" spectrum. I’m in a lucky position of being able to do a variety of things, but then I have to look for work every three months. So I do “Bombs,” then write a humor piece, and then act in something the scale of “Batman.” When I’m not acting… I ride a bike. That’s neither weird nor amazing. It’s more practical.