New life for Bernie and Cruz: Underdogs gain momentum with Wisconsin wins — but it's likely too little, too late

Cruz and Sanders win Wisconsin's primaries, making it likely both races will be fought to the bitter end 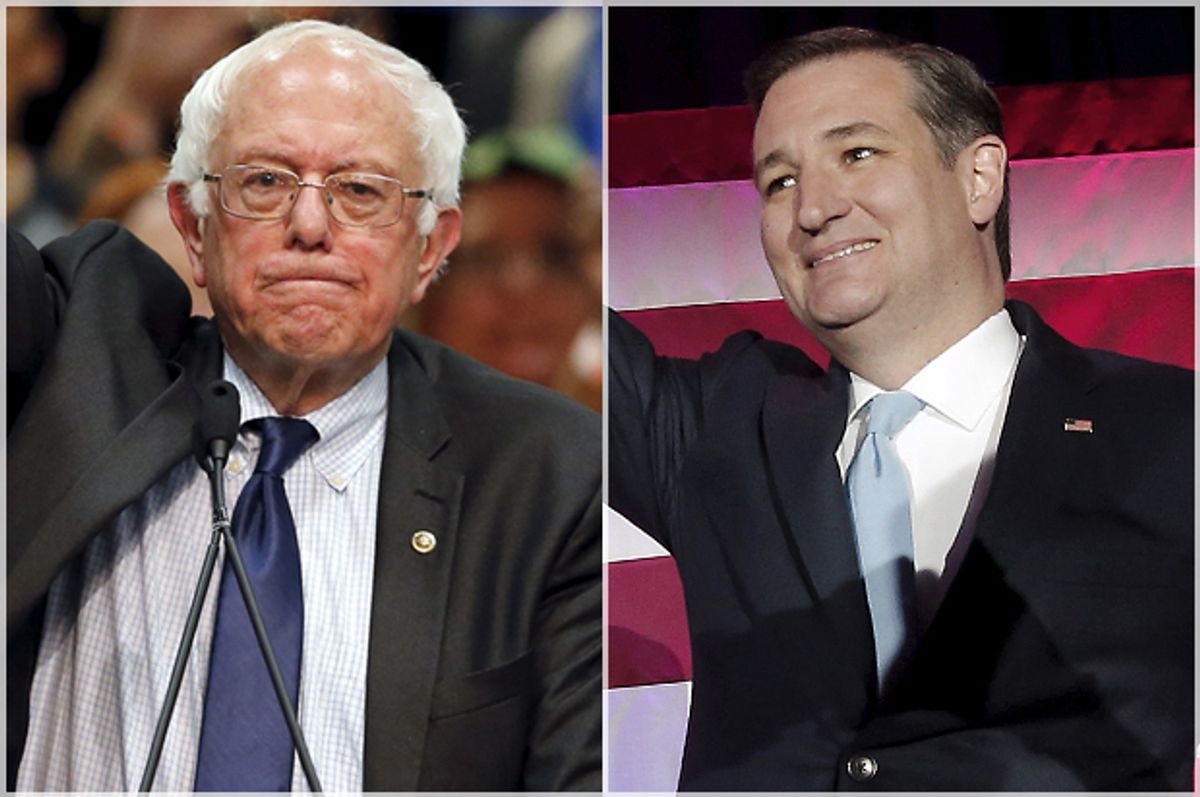 For such a small state, Wisconsin loomed surprisingly in the primary races for both the Republican and Democratic nomination. For both Ted Cruz and Bernie Sanders, Tuesday wins in Wisconsin are expected to help build the case that they have momentum. In fact, it's possibly enough to take it all the way to the convention and fight for the nominations there, even if both candidates end this race with a lower delegate counts than the front runners, Donald Trump and Hillary Clinton.

Of the two parties, Wisconsin loomed larger for the Republicans. The word going into the primary was that Trump was running up against a Republican establishment that was stronger and more embedded and therefore holding more sway than in other states where Trump is ascendent. This sense was confirmed when Sarah Palin, playing the role of the major Trump surrogate (the candidate himself stayed away, seemingly afraid of a hostile reception), gave a speech at the Milwaukee County Republican Party banquet where her nearly every attempt at an applause line fell flat.

"Wisconsinites (and other people in the upper Midwest) have high levels of social connectivity, which seems to be a correlate of the #NeverTrump vote," Nate Silver explained at FiveThirtyEight before the primary. "Trump voters are fairly socially isolated, by contrast." Going into the primary, Cruz had a nearly 5 point lead over Trump in the polls.

In the end, Cruz crushed Trump so thoroughly that NBC News announced his win less than a half hour after he polls closed. While Cruz still falls well behind Trump in the delegate count, this win chipped away at Trump's hopes of getting the 50% of delegates commonly assumed he'll need to avoid a contested convention. Cruz in all probability can't win the nomination in voting, but he's clearly positioning himself to be the hey-he's-not-Trump guy if it comes to that.

"Tonight is a turning point. It is a rallying cry," Cruz announced boldly during his victory speech. He then hinted at his Hail Mary strategy by saying he will get the most delegates "either before Cleveland or at the convention."

The former is nearly impossible, but he might not get his hopes too high about the latter. Cruz may end up spending all this time and money keeping Trump from hitting 50% only to watch Paul Ryan snag the nomination out from under him at the convention. Not that anyone will be crying to watch Republican voters, who have consistently elected politicians who have chipped away at the democratic process and campaign finance laws, watch their preferred candidates get the shaft so some dude hand-picked by billionaires waltzes in without even bothering to campaign.

The Cruz win was especially interesting as exit polling in Wisconsin showed that Republican voters seemed as interested in "outsider" candidates as they have in other states where Trump has done much better.

EXIT POLL: What are Wisconsin voters looking for in the next president? #Decision2016 pic.twitter.com/hyXhwCxJfY

Interesting because while Cruz is too hated by the D.C. establishment to be considered a true insider, he is also a career politician who doesn't really register as outside the establishment, either. On top of that, he's being touted as the "establishment" alternative to Trump, if only because nearly every other truly establishment candidate has been knocked out.

But as Brian Williams noted on MSNBC, this was less a Cruz win than a Trump loss. And really, no wonder after the rather stunning debacle that was the previous week for the campaign. The week started with Trump's campaign manager being arrested on assault charges and somehow got worse from there, as Trump then preceded to anger the religious right for exposing how there's no way to ban abortion without branding one-third of American women as criminals.

Under the circumstances, it's not surprising that a huge number of Wisconsin Republicans balked, instead throwing their votes to the creepy guy who you wouldn't like to be left alone with but who at least bothers to memorize the anti-choice nonsense talking points you need to run for president as Republican.

Wisconsin is a winner-takes-most primary for the Republicans, which is why it felt like such a make-it-or-break-it night for the party. For Democrats, who split the delegates, the winner was as much about the narrative as it was actual delegate counts, at the end of the day. Sanders was ahead in the polls, which is to be expected, as the state is really white, meaning the demographics favor Sanders. However, it's a primary state, which tends to favor Clinton.

Either way, a win for Sanders, even without a significant net gain in delegates, was expected to help boost spirits going into New York and keep alive the message that it ain't over yet. Politico reported on Tuesday that the Sanders campaign has announced that they are planning for a contested convention, and a win in Wisconsin became all the more crucial to stoke the narrative that this is worth fighting until the bitter end.

The primary was called by NBC News for Sanders early, which was mildly surprising, as exit polls showed low turnout for younger voters, who tend to prefer Sanders more than older voters. But Sanders's bold language about "socialism" is clearly having an effect:

Sanders devoted his victory speech, given in Laramie, Wyoming, to the idea that his win represents momentum.

"Momentum is starting this campaign 11 months ago and the media determining we were a fringe candidacy," he intoned, continuing to lay out a story of how he is the underdog whose moxie has overcome the doubters. "At a time in contemporary politics, when every major candidate has a Super PAC, we have said no to Super PACs."

Win or lose, it's impressive that someone who calls himself a socialist can get such a strong vote of confidence, even from Democratic primary voters. While it's always unwise to speculate too broadly about the direction of American politics, this result bodes well for those who hope this country is drifting in a more liberal direction. Ironically, his campaign is built largely on concerns that there's too much money in politics, but as his victory speech indicated, money may not really matter in the end as much as ideas.

The next big primary is New York, where Clinton has a hefty lead but Sanders continues to gain. While it's still hard to imagine Sanders gaining enough on Clinton to really give her a contest, this win puts some winds in the sails as they go into a state that might be the one big enough to break the back of the Sanders campaign.