“The People v. O.J. Simpson”’s stinging verdict: The trial was always about narrative, not truth 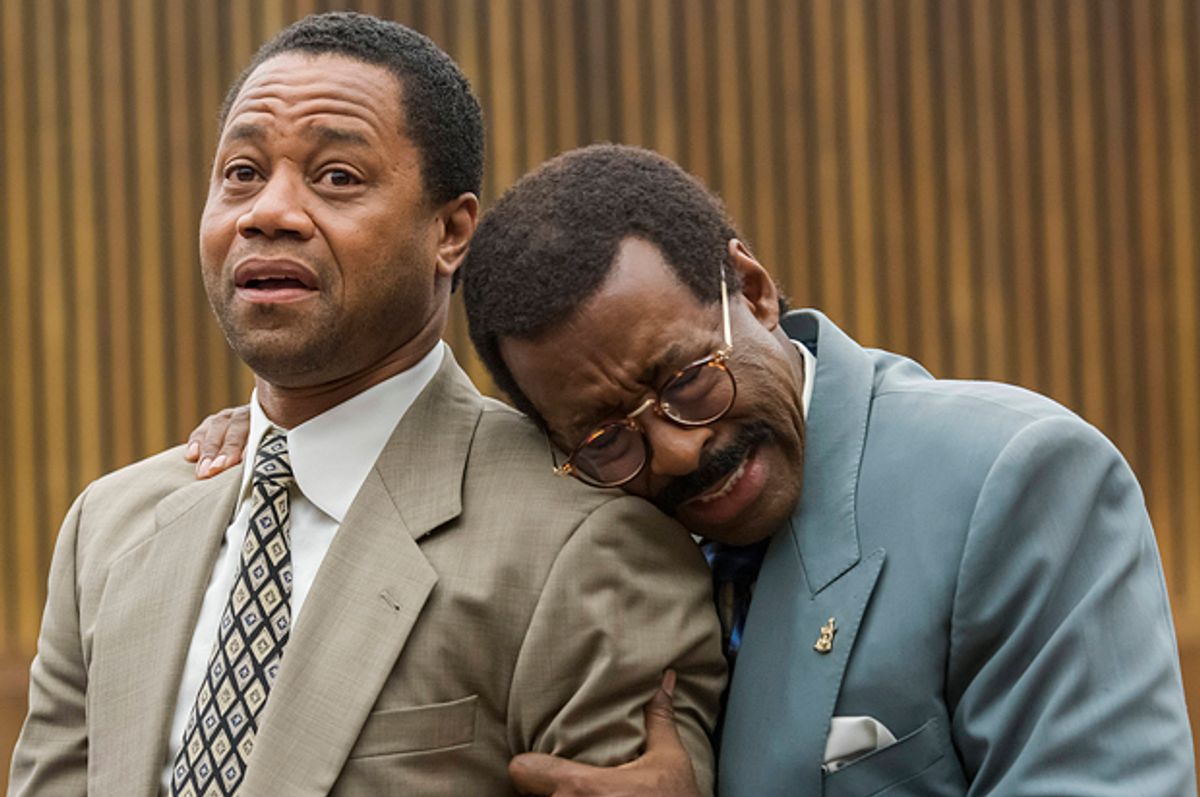 The last shot of “The People v. O.J. Simpson: American Crime Story”—the first installment of what is to be an ongoing retelling of real crimes, on FX—is of Nicole Brown Simpson and Ron Goldman, the real people who were murdered on the night of June 12, 1994. The trial made it easy to forget them; and the show, as it tries to map out the complicated twists of the O.J. Simpson trial’s narrative as it unfolded in the public eye, sometimes makes you think that it has lost sight of them, too. But in last night’s finale, “The People v. O.J. Simpson” really brings it home, delivering a landscape of disillusionment without the solace of emotional remove.

For a trial that quickly ceased to be about the truth, “The People v. O.J. Simpson” was a 10-hour attempt to restore the truth to it—and to restore, too, the emotional presence of this story, long after only the black-and-white facts on Wikipedia remain. Before watching this show, it might have been possible to know that Simpson had a pile of evidence against him, or that Detective Mark Fuhrman used racial epithets, without fully accepting it. But the writers of “The People v. O.J. Simpson,” led by showrunners Scott Alexander and Larry Karaszewski, wisely retained both the stunning facts and the equally stunning human responses to those facts, making each episode churn with some new revelation of human dynamics.

Brilliantly, it all hurts. “The People v. O.J. Simpson” is difficult to stop watching, but it is also difficult to process, shrouded as it is in cynicism and thwarted justice. The trial managed to take the stuff of longwinded New Yorker articles and make it the stuff of tabloids; the show manages to take the stuff of tabloids and turn it into moving drama. As I wrote when the show debuted, what makes the show so brilliant is that it is mostly just trying to understand what the hell happened here.

Throughout this season, “The People v. O.J. Simpson” has followed through on that endeavor with writing, acting, and directing that is consistently brilliant—faithful to the source material, empathetic to everyone involved, and conscious of both the ridiculousness and the gravity of the situation. “The People v. O.J. Simpson” is not at all above being melodramatic, campy, or outright funny; the much-discussed restaurant scene with a young Kim Kardashian is evidence of that. But it can also be incredibly, painfully moving, such as Marcia Clark (Sarah Paulson)’s makeover scene, in the sixth episode of the season, “Marcia, Marcia, Marcia.” The show has repeatedly demonstrated adroit technique coupled with a wry understanding of human nature—both in terms of its real-life characters’ interiority and in terms of what we, the audience, would find gripping.

The show teased many human stories from this knot of discord. The glee of celebrants, like the defense team and much of the black population of Los Angeles, exacerbates the quiet, disenfranchised disappointment of the mourners, namely the Goldman family and the prosecution. There is the personal odyssey of Marcia Clark (Paulson), who seems to witness a new level of disillusionment and despair in every successive episode; there is the trainwreck of Robert Kardashian (David Schwimmer)’s faith in the world, as he slowly realizes his good friend Juice is, in all likelihood, guilty. In the finale, those arcs are put to uneasy rest—Marcia discloses how being raped at 17 created her sense of misson; Chris Darden (Sterling K. Brown) tells her he is planning to leave the District Attorney’s office. The Goldmans (Joseph Siravo and Jessica Blair Herman) sit in their car benumbed, staring out into space.

And there are the triumphant endings, too, with Johnnie Cochran (Courtney B. Vance), who manages to bring his police racism and misconduct in the LAPD to President Bill Clinton’s attention, and Judge Lance Ito, who remained married to his much-discussed wife and remained a judge and never wrote a post-trial tell-all book. And there is even the fraught homecoming of Simpson himself (Cuba Gooding, Jr.), who finds himself caught between freedom and notoriety, but has a huge mansion and lots of pretty girls hanging on his arms to show for it.

But what I particularly appreciated about the finale, “The Verdict,” is that while the episode is the end of the trial, it’s the beginning of the bystander’s journey to understand what happened in that courtroom in 1995. For anyone who didn’t know, or suffer at, the hands of police in this country, the verdict was impossible to understand; for anyone who did, it was a victory against just one of many racist cops, separate from Nicole and Ron and even O.J. In both mindsets, there is a kind of incomprehension at work—and it’s visible in the show in the real-life reaction shots of observers outside the courtroom and in the live audience on “Oprah.”

And they, the audience, are we, the audience; just as in 1995, when the world watched a crappy livefeed of the trial broadcast seemingly constantly from a Los Angeles courtroom, we watched 10 hours of an immersive miniseries that took us inside the lives of the major players. In a way that is extraordinarily difficult to do well, “The People v. O.J. Simpson” saves all its final implications for the viewer—even going so far as to step out of the re-enactment and give us the old based-on-a-true-story standby of pictures and captions.

Because there were the winners, the losers, and then those other people—Faye Resnick (Connie Britton) and Kris Jenner (Selma Blair), Mark Fuhrman (Steven Pasquale) and Bob Shapiro (John Travolta), who went on to live various kinds of half-lives, caught somewhere between obscurity and stardom. Even Simpson, before he went to prison for armed robbery, lived in this space, unable to quite leave the gloaming of the near-spotlight. And for these people—reality stars, commentators, celebrity-adjacent enablers, scene-creators—truth is always secondary to narrative, just as it was in the trial.

The finale is gutting, because it presents a reality that we sometimes, and maybe too often, actually do live in—one where real-life is “reality” TV, where competing narratives trump ideology; where no one really cares what happened the night of June 12, 1994. To echo another one of the demi-famous in the show, Vanity Fair columnist and human Greek chorus Dominick Dunne (Robert Morse, in the show): that’s another plot twist you couldn’t make up.