The talk-radio godfather of Trumpamania: What Michael Savage can tell us about America's white working class

While Trump was still gladhanding his way through polite society, Savage built an army of disgruntled Americans 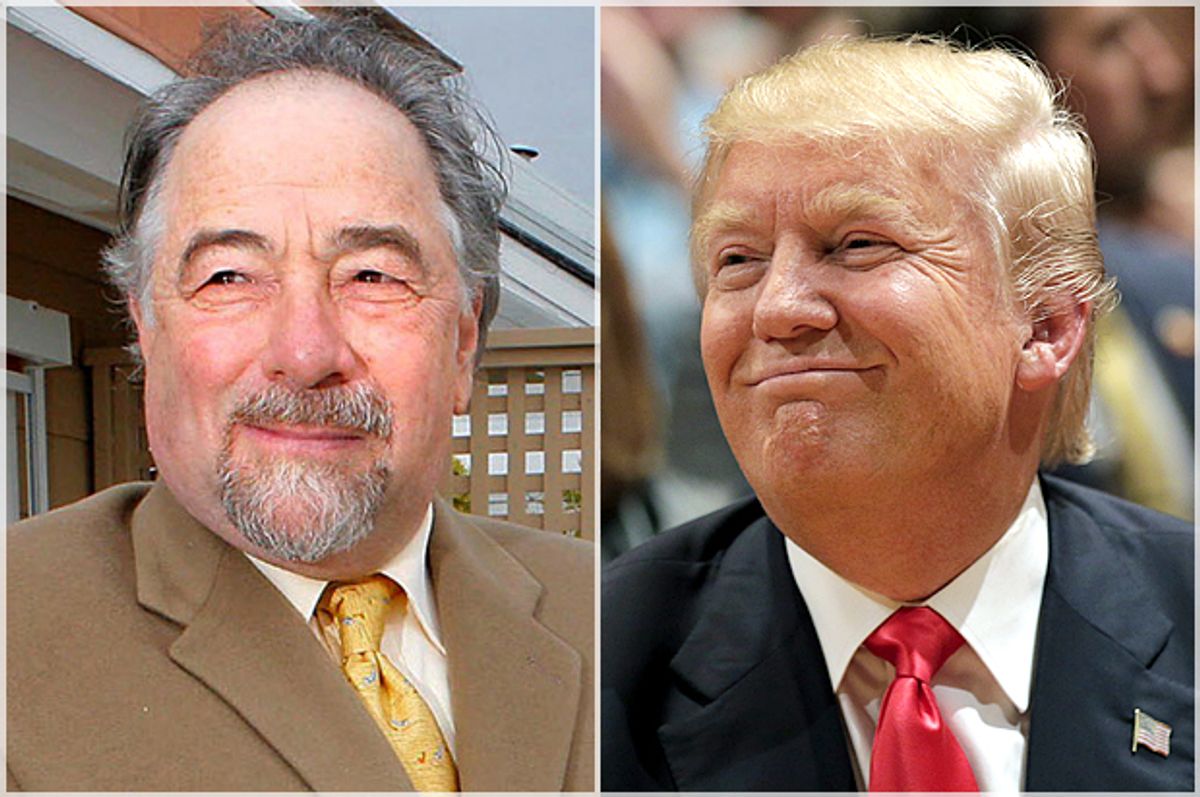 Republicans who want to sideline Donald Trump may think that all of the GOP's problems can be solved by his defeat. But Trump did not cause the great GOP divide, he's merely exploiting it. At its core, the alienation of the party's elite from a huge portion of its base stems from a deep sense of betrayal these voters feel at the hands of the Republican politicians they sent to Washington.

All too often these GOP incumbents, just like their Democratic colleagues, would cash in on their public service to make fortunes as lobbyists, doing the bidding of big business and even of foreign interests, pushing global trade deals that dismantled tens of thousands of factories and idled millions. At the same time, this disaffected base watched as the national government bailed out the banks, squandered the military, abused veterans, built up China, and ran up the national debt in the process.

So, just what portion of their oath of office did they keep?

(There is something similar at work between the Sanders insurgency and the professional Democrats, but not nearly as combustible.)

Long before Trump's arrival on the scene, it was conservative radio talk show host Michael Savage, the idealogical godfather of “Trumpism,” who galvanized this insurgency. Savage gave it a voice and a powerful narrative, one that proved extremely helpful to those, like iconoclastic Senator Ted Cruz, who rose to prominence taking on the very same GOP beltway insiders that Donald Trump is now making so nervous.

Years before Trump, Savage had already redefined the nature of the American political landscape when he blew up the Republican Party establishment's hold on its working class base. Trump can come or go, but this insurgency has a depth and breadth that can't be ignored.

I have been a longtime listener to Savage because I think that, as a journalist, you risk being blindsided if you ignore someone to whom millions of your fellow Americans are tuning in. I saw the rise of Trump coming several months ago precisely because I know how deep the support runs in so much of America for Savage’s nativist mantra, that the very survival of the nation is threatened by the erosion of our “borders, language, and culture.”

Between American multinationals, who do everything and anything to avoid taxes, and American politicians, who so often trade on their office to amass vast fortunes, regular working class Americans feel abandoned. For decades, as businesses have increasingly exploited undocumented immigrants for cheap labor or moved operations out of the country entirely, these voters have become resentful, watching their wages stagnate and full-time jobs with benefits become scarcer by the day.

For many of them, Savage's "Savage Nation" is a kind of sanctuary. In his running commentary, he's gone after the duopoly of Republican and Democratic elites. While Trump was still playing nice in polite society and donating money to Democrats, Savage was building a huge audience skewering political correctness and going after what he perceived as the excesses of both parties.

Savage calls liberalism “a mental disorder,” and blames it for the disintegration of a national cohesion that gave America the backbone to conquer fascism in the Second World War, and the persistence to outlast the Soviet Union in the Cold War that followed. For Savage, the classical foundations of western civilization are innately superior to whatever else is out there.

Yet, he will go on populist rants denouncing U.S. multinationals for outsourcing tech jobs. He has zeroed in on the bi-partisan tradition of elected officials that go on to enrich themselves by doing the bidding of corporations, and even foreign interests.

Savage is a raconteur of many parts, with roots in New York City, where he grew up. He is a bestselling New York Times author, has a master’s degree in medical anthropology and a Phd from the University of California at Berkeley in epidemiology and nutrition sciences. He says he is an avid conservationist and animal lover, yet dismisses global warming as a hoax.

His extemporaneous musings about his daily comings and goings, his 11-pound poodle Teddy, and about his days growing up in working class New York, are poignant and display a rich emotional arc. Unlike his rightwing colleagues, that rant on politics exclusively, Savage’s dynamic range makes him engaging company.

He can talk to listeners about what he had to eat and drink the night before, and, in the process, share the vicissitudes of growing older with millions intimately. He’s speaking to you and only you, especially if you fit his key demographic, the disaffected white conservative voter. Back in a flattering 2009 New Yorker profile Savage’s show was described as “one of the most addictive programs on radio, and one of the least predictable.”

I first started listening to Savage back in 2006, when I was a reporter for National Public Radio affiliate WNYC assigned to cover a press conference convened by Senator Charles Schumer. Schumer was sounding the alarm about the Bush Administration’s approval of a $6.8 billion dollar deal to have Dubai Ports World -- owned by the government of the United Arab Emirates -- take over operations at the ports of New York, New Jersey, Baltimore, New Orleans, Miami, and Philadelphia.

Critics of the deal, like Schumer, pointed out that, despite the close relationship between the U.S. and the UAE, two of the 9/11 hi-jackers, who had UAE passports, also used UAE banks; and that the UAE government was one of the handful of nations in the world to recognize the Taliban’s dominion over Afghanistan.

The port transaction had been approved on an expedited basis by the Committee on Foreign Investment in the United States, an inter-agency panel convened by the Secretary of the Treasury for the purpose of determining if the sale of American assets to overseas-based companies is, or isn’t, in the best interest of America’s national security.

But all too often in these deliberations, the commercial interests beat out both the consideration of national security and the longterm economic wellbeing of the American worker. This time it would be different.

As I listened to Schumer, not far from the site of the World Trade Center, I was struck by the seeming incoherence of the Bush Administration’s quick approval of the deal, and their post-9/11 Homeland Security imperative, which they had used to reorganize American society while putting the nation on a trajectory of perpetual war.

Even as the rest of the media was stumbling around to flesh out the details of the port deal, Michael Savage was charging to the air, like a 21st century Paul Revere, dubbing the deal “Portgate” and urging his millions of loyal listeners to take to the ramparts and loudly register their disapproval. The globalists had to be stopped.

Each day Savage turned the heat up on the beltway, recounting how the sell-off of another critical piece of U.S. infrastructure to Arabs was being facilitated by lobbyist-traitors from both parties. The Washington Post reported that Dubai Port World was enlisting the likes of former Senator Bob Dole and former Congressman Tom Downey and his wife, former EPA Administrator Carol Browner, both Democrats.

At first the Bush White House, clueless about the outright rebellion that awaited them, defended the deal. Boosters dismissed the critics concerns over foreign ownership as just ignorance. "Why, didn’t these simpletons know that the Chinese run a Pacific Coast port?" went the conventional wisdom.

By the time Savage was done hammering the Bush Administration over “Portgate,” the White House’s only refuge was to say President Bush was only aware of the deal after it was approved. The deal had produced something that was by then already exceedingly rare in Washington, an overnight bipartisan outrage. Congress stampeded to stop the deal.

In the end, Savage prevailed and Dubai Ports World went packing. For the swelling ranks of the Savage Nation, that was the beginning of the end for the Bush brand of mercantile Republicanism. Savage, elected by nobody, had moved the nation and stopped a deal that all the smart money was convinced would sail through. He had undermined a sitting Republican president with a big chunk of the base that had elected him.

Savage has been assailed as a racist for frequent comments he’s made about Islam, Arabs and the undocumented, but, as we have seen more recently with Donald Trump, the more over the top his rhetoric has become, the more popular he has become as well.

These days Savage's hate and vilification of President Obama is so unrelenting that it often crosses over into being disrespectful of the institution of the Presidency itself, and the electoral process by which President Obama came to occupy the office. No doubt riding this wave of anger is great for Savage Nation, but pretty dicey for the country as a whole.

But that's assuming, of course, that you want to keep it whole.