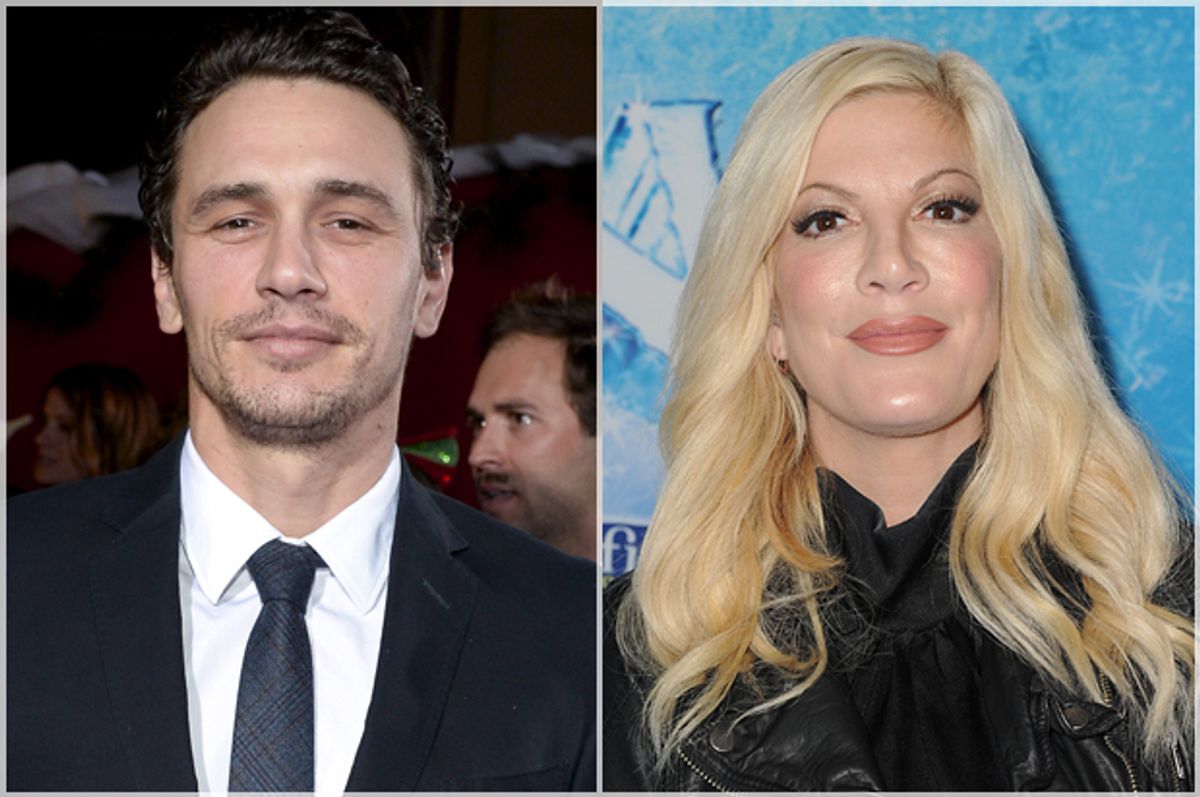 Terrible television is having a bit of a moment. Terrible, in a certain kind of way; that type of bad art that turns into a good laugh. For reasons that are certainly beyond me, outrageously terrible film and television often stumbles into the quadrant of neural receptors that read for hilarity.

But trying to make something consciously bad is a difficult endeavor. IFC tried this a few years ago with “The Spoils Of Babylon,” a short series that starred Kristen Wiig and Tobey Maguire as star-crossed lovers, but that mini was always just self-aware enough; apparently, it was too detached for Wiig and costar Will Ferrell, who went on to star in the bonafide Lifetime film “A Deadly Adoption.”

Now James Franco, of all people, is following in their footsteps. Directly because of “A Deadly Adoption”—and bolstered by his own turn on the long-running soap “General Hospital”—Vulture reports today that Franco’s remake of the Lifetime film “Mother, May I Sleep With Danger,” also on Lifetime, will not just be about a “danger-seeking” daughter, but also a “lesbian vampire romance.” Even typing those words is making me laugh. Tori Spelling played the lead role in the original; in the remake, she’ll be the wary mother, suspicious that something is up.

When theater major Leah (George), brings home the special someone in her life to meet her mom, Julie (Spelling), the family is met with a surprise when Pearl (Meade) comes to the door. Julie tries to embrace the idea of Leah’s new love interest, but she can’t shake the feeling that something is very wrong. Julie’s suspicions lead to a startling discovery about Pearl that puts Leah in serious danger. Will Julie be able to save her daughter from an eternity of heartache before it’s too late?

This is going to be terrible, and that is the point.

Lifetime, to its bizarre credit, is a network that has never let the flame of the hilariously terrible go out. They made, for example, the Lindsay Lohan vehicle “Liz & Dick,” “Lizzie Borden Took An Ax,” with Christina Ricci, “Prosecuting Casey Anthony,” with Rob Lowe, and a remake of the iconic incest film “Flowers In The Attic”—making for some of the best laugh-watches of the last few years. Other network have tried to approach its level of calculated misfire—A&E, most notably, as it transitioned from the network that produced “A Nero Wolfe Mystery” to the one that aired “Duck Dynasty.”

At least partly because of the unholy phenomenon known as the made-for-TV movie, television has long been a medium friendly to the so-bad-it’s-hilarious genre. I think partly, a cultivated appreciation for the terrible comes from an era of media scarcity, where you kinda just had to watch whatever was on TV or playing in theaters. In our era of Peak TV and prestige everything, that meta- level of enjoyment for something really terrible is a rarer pleasure.

But it appears to be one we’re still looking for. “American Horror Story,” on FX, has an almost Teflon appeal, despite frustratingly bad storytelling and exploitative sex scenes, and that’s because Murphy is an adept of camp storytelling, whose academic lineage and destabilizing implications are better discussed by Emily Nussbaum at the New Yorker. “Empire,” with its implausible twists and turns, its melodramatic family dynamics, and over-the-top grating performances, is one of the most-watched shows on television. The twinned pleasures of overwrought and entirely un-self-aware storytelling have not been lost in the post-“Mad Men” world.

This has had an interesting renaissance in “The People V. O.J. Simpson: American Crime Story,” the true-crime re-enactment series that captured audiences both for being deadly serious and for finding ways to exploit the bewigged and taupe-upholstered nostalgia for the ‘90s. Which is why immediately after that show concluded, NBC announced that they would be working with legendary “Law & Order” creator Dick Wolf to create their own true-crime anthology miniseries. I love “Law & Order” and its many spinoffs, and they are captivatingly addictive. But they are the very definition of a guilty pleasure, living at the nexus between implausibility, exploitative melodrama, and extremely sexy public servants. Maybe what audiences have been looking for is a touch of trashiness; at any rate, even if we weren’t looking for it, studios appear ready and willing to deliver anyway.