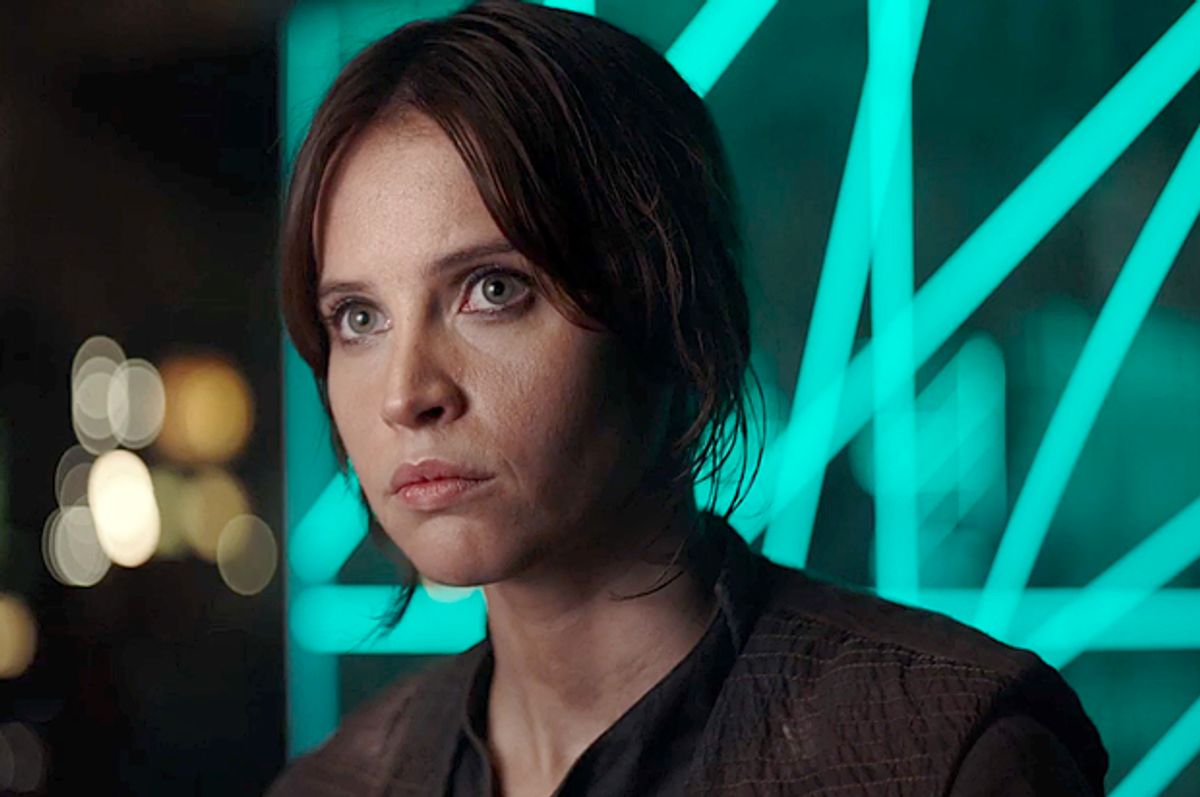 Felicity Jones in "Rogue One: A Star Wars Story" (Lucasfilm)
--

At some point, the “Star Wars” movies may simply sputter out: The money to be made will be so huge, and the number of ideas left to pursue will be so small, that the whole franchise will dissipate into a sea of CGI.

But the trailer for “Rogue One: A Star Wars Story” is reason for optimism. It’s partly that this clip of just under two minutes has some of the same feel – the same brooding, coiled energy -- as “The Force Awakens.” (The new film, which opens in December, takes place before the original "Star Wars: A New Hope," (episode IV) and tells the story of a rebel band trying to steal the plans for the Death Star. Unlike the Han Solo spinoff that's also planned, this doesn't have any clear links to the series' original characters.)

But it’s also because the acting in the film seems to be as much of a priority as the effects. Anyone who remembers the overdose of action and effects in “The Phantom Menace” – light saber battles that went nowhere, characters who didn’t seem to belong – will be happy to watch the new trailer. The first thing we see is Felicity Jones’ character, Jyn Erso, walking with her back to us. The British actress garnered critical acclaim for her improvised role in the wrenching romantic drama “Like Crazy” and is probably best known for her Oscar-nominated turn as Jane Hawking, Stephen Hawking's ex-wife, in "The Theory of Everything." Here she conveys an action hero’s determination and swaggering body language. In just a few seconds on screen, she projects powerfully. Jones has the authority to make a line like “I rebel” sound persuasive. She also looks a enough like Rey that she could be “The Force Awakens” character’s mother.

Director Gareth Edwards is a visual guy more than anything – his roots are in digital effects – but his 2014 “Godzilla” reboot showed that he could bring some thematic substance to a blockbuster.

The other reason the “Rogue One” trailer fills me with optimism is Forrest Whitaker, who’s been one of the greatest American actors for decades now. There’s something elusive about him; he often plays complex characters who brood behind various kinds of masks, and his roles as Idi Amin in “The Last King of Scotland” and in “Lee Daniels’ The Butler” show his incredible range. Whitaker is not an obvious pick for a “Star Wars” film, but his ambiguity could bring real depth to the role. The web has seen speculation as to what character he will play in the film – will he be a good guy or a bad guy? It’s still unclear, but he seems to be serving as a teacher to Jyn, one who asks her to contemplate the likely failure of her mission.

So far much of the excitement around Whitaker’s character has been about his costume, but the trailer shows that his voice and delivery are his secret weapons. (Whitaker also deserves the chance to make up for “Battlefield Earth.”)

In a time in which Hollywood is coming to terms with its limited roles for women and people of color, a female hero and black mentor shows that the filmmakers behind “Star Wars” are extending the diverse casting of “The Force Awakens.” (This is likely to piss off a certain class of obnoxious fanboy as much as the new “Ghostbusters” has.)

How will the whole film end up, with the insane expectations that have returned to the Star Wars universe? It’s hard to tell from a brief trailer, but with these actors, the return of the Death Star, its dark tone, and a director who seems like a good fit for a smart space opera, this could continue the winning streak.