They created this nightmare for themselves: The clueless GOP establishment is fueling hurricane Donald Trump

What aloof GOP leaders don't get is that rank-and-file, working-class voters feel betrayed by them 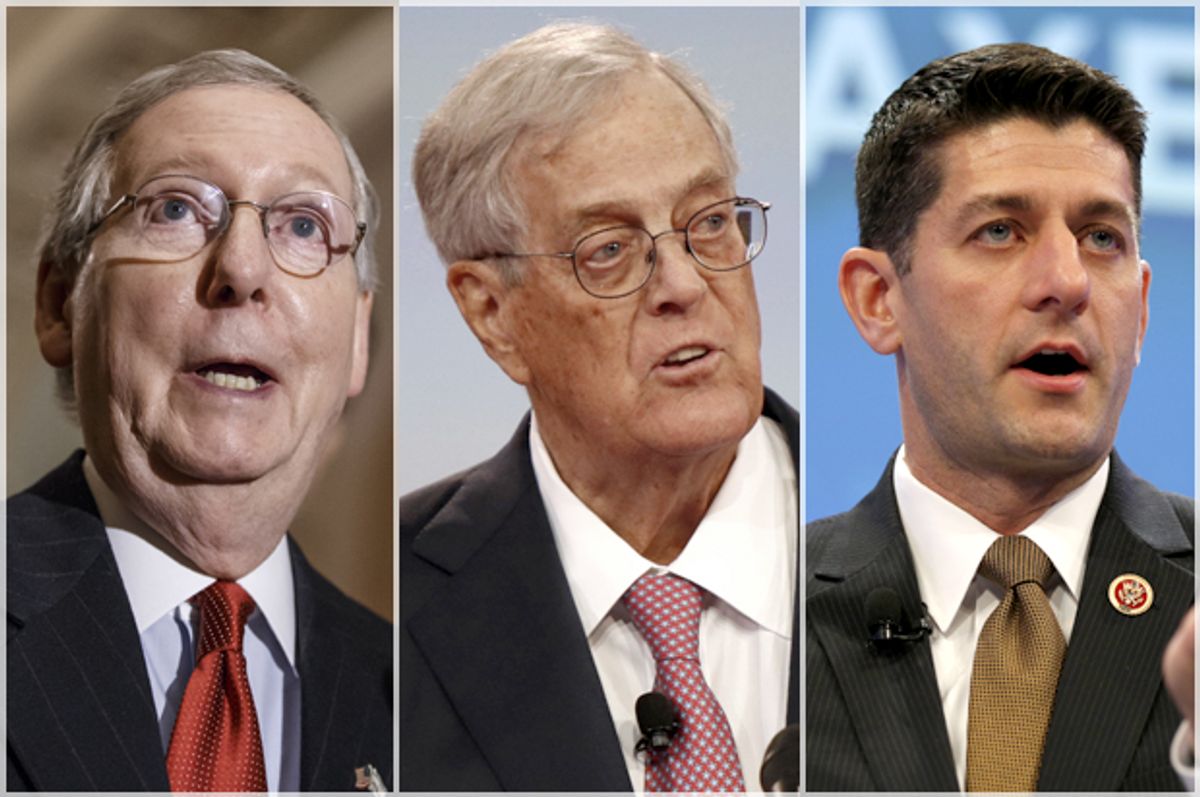 But his is not a problem for most hoity-toities, for they don't deal with the great unwashed. But cluelessness about the masses can become a major occupational hazard for political elites -- including campaign operatives, candidates, pundits, and the big-money donor class. And while this is a problem for the establishments of both major political parties, today's Republican establishment now finds that it is so out of touch with regular voters that it now faces a howling, Category-5 hurricane that's threatening to implode the Grand Old Party.

None of the elites saw Hurricane Donnie coming, and with the blow-hard now raging at full force, the GOP's upper-crusters still don't seem to know what hit them, much less what to do about it. They are so out of it that they even tried to blunt his surge by having Mitt Romney and Jeb Bush rush out and say bad things about The Donald, imploring voters to turn their backs on him. To see these two buttoned-down pillars of the moneyed establishment huffing and puffing at the storm was hilarious - and as hopeless as them trying to blow away a real hurricane.

What the aloof, affluent leaders of the Republican Party don't get is that the source of the storm presently wrecking them is not Trump, but infuriated, rank-and-file, working-class voters who feel betrayed by them. None other than Mitch McConnell, Paul Ryan, the Koch brothers, the corporate CEOs and lobbyists, Mitt & Jeb, and the other well-off swells who run the GOP are the ones who've stripped the party of any blue-collar appeal. They've single-mindedly pushed a plutocratic agenda of trade scams, tax cuts for the rich, and subsidies for runaway corporations, while constantly slashing at Social Security, Medicare, and other programs that their own non-affluent voters need.

The Party powers now wail that Trump is stealing their voters. But he's not -- he's just picking up the people the GOP elites threw away.

All that said, the Republican Party's establishment has come up with a secret plan to peel off its long-faithful, blue-collar supporters from the Donnie Trump spectacle. Their plan is code-named: "Operation Paul Ryan."

Good grief -- the GOP's old line clique of congressional bulls, corporate funders, lobbyists and right-wing think tanks is as confused as goats on Astroturf when it comes to grasping a core part of Trump's appeal. He's reaching out to longtime Republican voters who've finally realized that it's the party's own Wall Street elites who knocked them down economically and the party's insider cadre of K-Street influence peddlers who've shut them out politically.

The party powers are trying to comfort themselves by insisting that The Donald is winning only because he's drawing voters who're ignorant, racist, xenophobic and misogynistic. In fact, he's drawing huge numbers of disaffected Republicans who're mainly antiestablishment and deeply-anti the party's own power players. These hard-hit, angry voters are not Koch-headed, laissez-faire ideologues -- they like Trump's opposition to job-busting trade scams, his mocking of big-money campaign donations, his call to hike taxes on Wall Street's pampered hedge-funders, his support for Social Security, etc.

For these voters, "Operation Paul Ryan" is a dud, a farce ... and an insult. Rep. Ryan has long been the kept-darling of the Wall Street/K Street crowd and the Koch brothers. The obtuse establishment snootily calls him "serious" presidential material -- only because he champions such plutocratic policies as privatizing Social Security, cutting taxes on the superrich, deregulating Wall Street, and turning Medicare into a voucher system. The only thing serious about Ryan's agenda is that it's a dead-serious loser with the great majority of Americans.

Trying to knock-off Trump for Ryan is a sign of the GOP's irreversible decline into cluelessness and political irrelevance.