With its huge media campaign, Operation Battle of New York is taking on corporate establishment 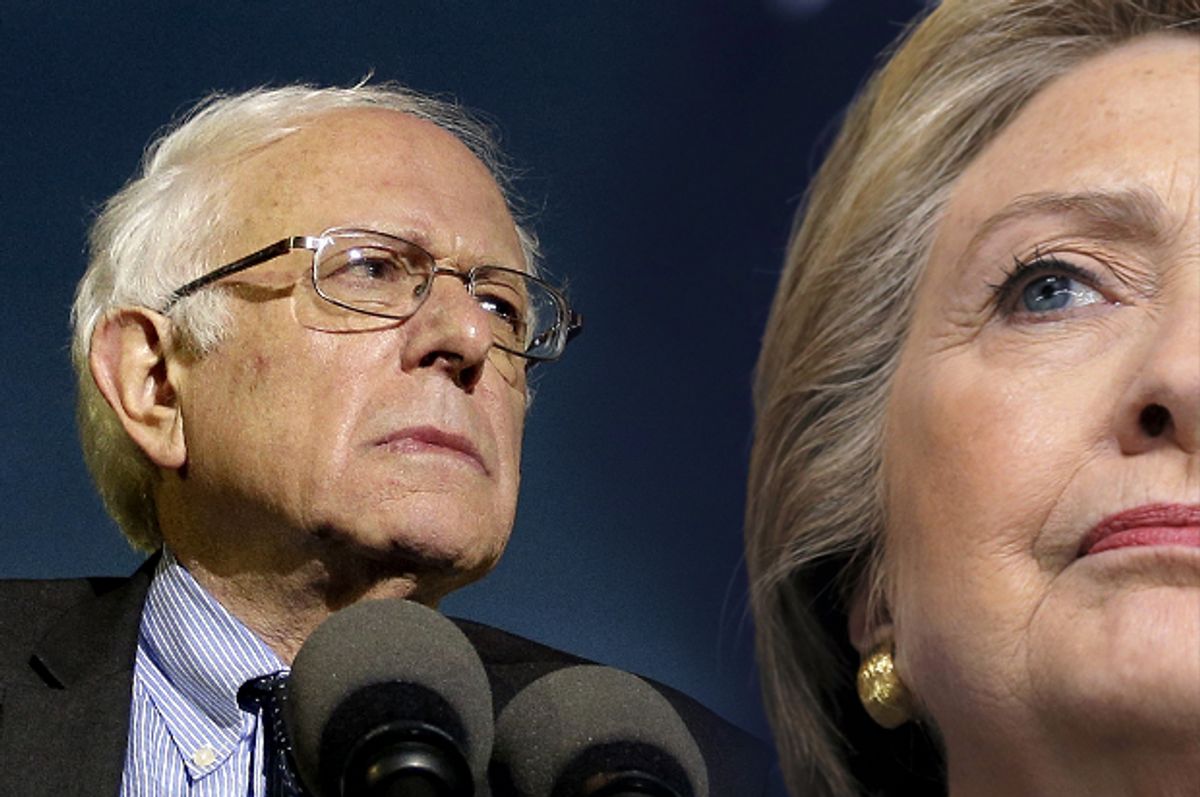 “The corporate media and establishment keep counting us out, but we keep winning by large margins,” the Bernie Sanders campaign tweeted triumphantly, after the Vermont senator won the Wisconsin primary by a large margin this week.

Journalists and activists in New York — the site of what may be the most important primary in the election — have noticed. And they are organizing in response.

It is the name of a new campaign launched by the editorial groups of The Indypendent and The Occupied Wall Street Journal, left-wing citizen journalist publications that have served as important voices for American social movements for more than a decade.

"We can expect corporate media to do everything it can to prop up Clinton and ignore or mischaracterize Sanders and the increasingly broad and diverse movement that supports him," Operation Battle of New York writes in the description accompanying its Indiegogo campaign.

"But we don’t have to leave it there. Independent media can tell another story."

The idea the activists have is to subvert, even "supplant," mainstream media outlets in the days before the April 19 primary. They plan on creating, editing and printing 500,000 copies of a special edition, bilingual, broadsheet newspaper with the kind of compelling coverage mainstream media outlets rarely touch. And they are going to flood New York with the publication in the week before the primary.

An editorial team has already been formed, and has been working on the publication for weeks. Production began on April 7, and is only going to accelerate in the coming week.

In the first five days of their Indiegogo campaign, the group has raised approximately $8,000, with almost 200 backers. And they say this is just the beginning.

The publishers of The Battle of New York have a lot of experience in this territory. Their guerilla media campaign is based on the ones they helped lead during the Occupy movement, along with those in the 2003 protests against the Iraq War, the 2004 protests against the Republican National Convention, the 2014 People's Climate March and today's Black Lives Matter movement.

Salon sat down with some of the leaders of Operation New York, in hopes of learning more about the campaign's strategy and goals.

"While I respect my colleagues and friends in the mainstream media deeply, there is clearly a disconnect between what is being reported regarding the support for Sanders and what you actually find out from talking to people," Josephine Zohny, who is handling media relations for The Battle of New York, told Salon.

"I want to make sure people know The Battle of New York is not just run by a bunch of white 'Bernie bros,'" Zohny stressed, referring to a misleading stereotype spread by some Clinton supporters that the actual demographics of the hundreds of thousands of Americans voting for him have shown to be false.

"As a mixed-race, Arab-American woman, I take issue with that characterization both personally and on behalf of The Battle of New York," she told Salon. "If you just look at the events for Bernie in New York in particular, the attendees look like the city of New York. They are multicultural, they do skew younger, but they are still multi-generational, and you have both men and women."

"Battle of New York is the same," Zohny explained. "You have people of color, single mothers, a diverse swath of society coming together to make sure that the revolution currently taking place is documented in a way that is accessible to everyone."

Zohny noted that Operation Battle of New York plans on publishing both English- and Spanish-language editions.

She also stressed that the campaign is not affiliated with Sanders in any way, and does not receive any funding from Sanders' campaign.

Bernie has major momentum heading into the New York primary on April 19, what will likely be the most important day in the entire election. For months, progressive activists have been mobilizing (often in incredibly unique, creative ways) around his campaign in the state, the heart of the Clinton machine, where Hillary served as a senator.

A self-declared democratic socialist and longtime independent who refuses money from Wall Street, Sanders is a true underdog candidate. Despite his impressive gains, however, the U.S. media has paid very little attention to Sanders. It has proven much more interested in the far-right demagoguery of Republican front-runner Donald Trump, who has gotten up to 23 times more media coverage.

When the media has given Sanders coverage, it has been overwhelmingly harsh and negative, dismissive of the idea that anyone can challenge Clinton.

Like the major corporate media networks, the New York establishment, the home of Wall Street, has long simply assumed that Hillary Clinton will be the Democratic nominee; Sanders was not even on the table.

It was in opposition to this same establishment that the Occupy movement erupted in 2011. Today, with the primary rapidly approaching, journalists and activists in New York who cut their teeth in the movement say they have had enough of the anti-democratic, elite-dominated environment, and have decided to organize.

"Every major institution in New York is 100 percent in the tank for Hillary Clinton," Jed Brandt, an editor for The Battle of New York who organized the editorial group, told Salon. "Whether it's Rupert Murdoch, the New York Times, even neocons like Max Boot."

"This is not about partisan liberalism," Brandt stressed. "We are challenging the actual power structure in New York."

This is one of the most interesting, and important, aspects of The Battle of New York. Like Occupy, is stands in firm opposition to the Democratic Party establishment, epitomized by figures like Hillary Clinton, DNC Chair Debbie Wasserman-Schultz or Chicago Mayor Rahm Emanuel. This is not a project run by Democratic elites; rather, The Battle of New York is an operation spearheaded by grassroots activists who want to fight corporate control over their society.

Brandt clarified that he has issues with some of Sanders' politics — which are not really socialist politics as much as they are more commonplace European-style social democratic politics — but says the turning point for him was when Bernie stood with the activists who shut down Donald Trump's speech in Chicago. Unlike Clinton, Sanders refused to take establishment bait and condemn the protesters; instead, Sanders blasted Trump for running a fascistic campaign.

"When Sanders said 'we need a political revolution and I can't do it alone,'" Jed Brandt said he knew he wanted to be a part.

"It wasn't the royal we; it was the popular we," Brandt said, expressing admiration for Sanders for running on the slogan "It's not me, us."

Brandt is a veteran in what he calls "revolutionary journalism" campaigns. He has been heavily involved in different social movements, and said he tries to help "do live-time reporting on major events that are being censored from the major news."

He has worked on numerous past press runs with the Indypendent and the Occupied Wall Street Journal, running 300,000-plus copies of special editions.

"This is about rising to the occasion and creating something that people are able to identify with," Brandt told Salon. He said the editorial team is trying to create something very cool and contemporary in style and presentation.

"This is not a party line publication or a dissident complaint," Brandt said. "We want it to feel organic to the movements."

The Battle of New York has been "insanely successful with literally no media coverage," he stressed.

His ultimate goal? Brandt says the team wants to, "if only for a brief moment, supplant the mainstream media."

Bernie Sanders has insisted that, if he wins the New York primary, he could very well be the next president of the United States.

The numbers show he is right.

With 45 percent of delegates in the primary so far, Sanders has gradually closed the gap with his rival, Hillary Clinton.

He has has won seven of the last eight primaries by double digits — in Utah, Idaho, Washington, Alaska, Hawaii, the Democrats Abroad contest and Wisconsin.

In Wisconsin, where the winner of the primary has gone on to become the party’s nominee in nearly 94 percent of past elections, Sanders swept 71 of the state's 72 counties — 99 percent.

The organizers of The Battle of New York say Americans are living through an historic moment, and think it is imperative to mobilize at this time of tremendous political activity.

"What we are seeing in the Democratic primary right now is the historic repudiation of both neoliberal economics and the Clintonian way of doing politics, which have dominated within the party for the past quarter century," John Tarleton, another editor for The Battle of New York, told Salon.

"And this revolt against the Democratic Party establishment is being led by youth of all colors," he added.

Tarleton, who is the editor and co-founder of the Indypendent, says the ultimate success of the campaign will not just depend on a staff of people assembling the paper, but really on the public grassroots support it gets.

They will begin distributing print editions of the paper on April 12, one week before the primary, and plan on bringing up to 100,000 copies to Sanders' rally on that day.

The organizers also plan to give stacks of the paper to people at the rally, so they can distribute them in their own communities, at subway stations, schools, places of worship and more.

"New York is really shaping up to be the hinge on which the Democratic contest will turn," Tarleton said.

"The reason it's so important to have a publication like this coming out at this moment is that New York City is the heart of the Clinton machine," he explained.

"It's the hometown of Wall Street and the corporate media; it's a city that's run by a corrupt Democratic Party machine that serves 1 percent real estate developers while pretending to champion the 99 percent that is being gentrified out of their own city."

Tarleton also stressed, however, that Operation Battle of New York will be expanding outside of New York City into the state as a whole. Organizers plan on reaching 1.5 million New Yorkers, in both the Big Apple and other cities.

The Indypendent has experience with this kind of outreach. It has mobilized around past incidents, but Tarleton says Operation Battle of New York may be "the biggest and most ambitious project to date."

"Independent media can do amazing work to meet the moment," he said.

"We can expect a barrage not only on Sanders, but on the whole premise of his campaign," Tarleton added.

"So we're looking to stage an independent media intervention that will disrupt the 1 percent propaganda machine and their shilling for a status quo that they insist can never fundamentally be changed."