For years, Fox News has profited from its vicious, divisive rhetoric — and now a steep price is being paid 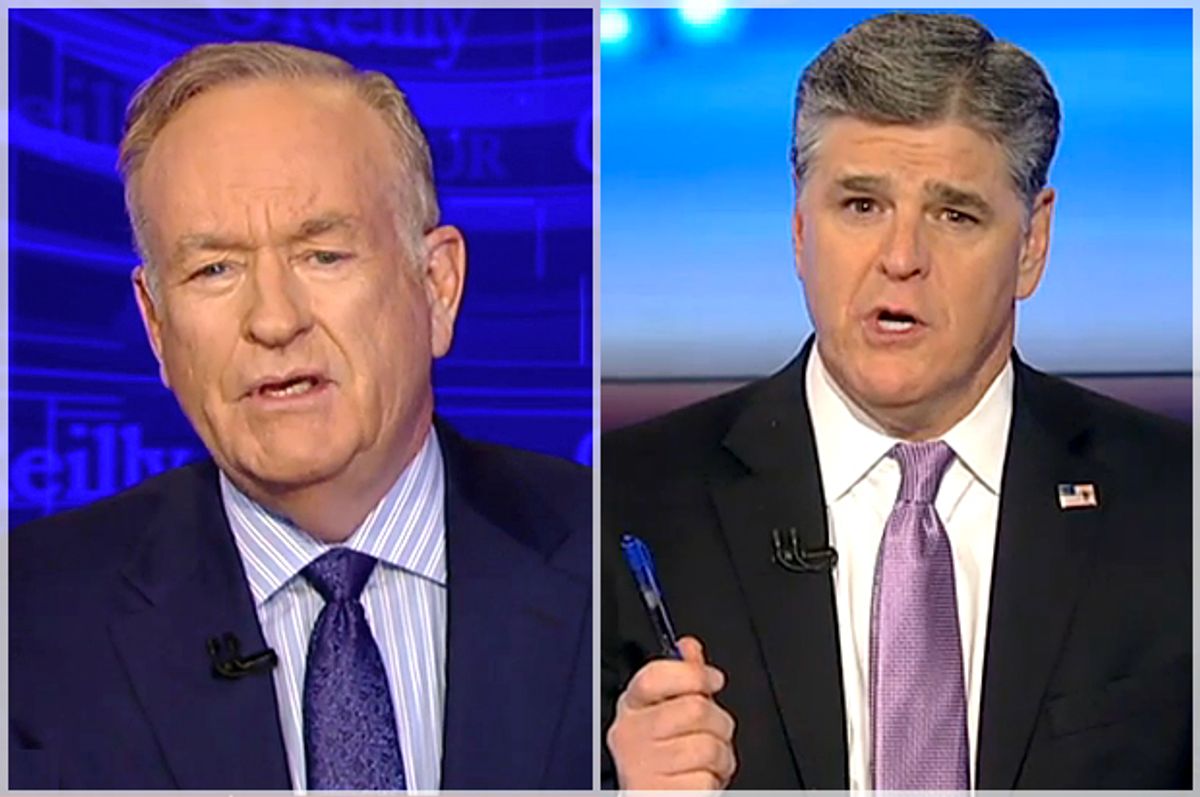 The Republican Party is in a pickle.

The Party itself despises its own two leading presidential candidates, Donald Trump and Ted Cruz. This is a remarkable oddity just in itself. But there is good reason for it. Both of these candidates are so extreme and disastrous that they will almost certainly never be able to win a national election for the Republican Party.

But much worse, if and when one of these candidates does become the Republican Party’s nominee, the GOP could very well be torn asunder into factions. This could devastate the party for years or even decades to come.

The Republicans, however, have no one to blame but themselves. This is a crisis of their own creation. And it didn’t just happen overnight.

The Republican Party has been fomenting anger and discontent in the base of its own party for years. The mechanism through which this hate has been disseminated has been the network of extremist media of right-wing talk radio and the Fox News Channel, which is essentially talk radio transposed onto television.

And make no mistake, spewing hate has a significant impact upon society. It is the equivalent of modern-day propaganda where the population is barraged with a stream of consistent messaging.  As ordinary people go about their daily lives, they are exposed repeatedly, day in and day out, to the same messages in numerous forms and by numerous people. Pretty soon, these messages begin to sink in and take effect.  The audience begins to adopt a worldview consistent with these messages, regardless of the degree of truth.  It is a remarkable phenomenon.

From Nazi Germany in the 1930s to Bosnia and Rwanda in the 1990s, history is replete with examples of propaganda's effectiveness as a tool for shaping public opinion. Propaganda is powerful stuff.  Many people are susceptible to it and can be swayed by it, especially the less educated.

In America today, right-wing media is engaged in this very same activity through Fox News and extremist talk radio.  This network is constantly barraging its audience with a stream of consistent messaging.  And this messaging is overwhelmingly negative and destructive.

The messaging consists of common themes that recur in various forms. One central theme is a fierce opposition to government, especially so-called “big government.” This reappears in various sub-forms as well, such as rage against bureaucracy, regulations, Washington, D.C., the IRS, the Environmental Protection Agency, and federal politicians.

Another big theme is fear and victimization. You had better watch out because government is gonna getcha! “They,” whoever that may be, are about to take away your rights.  Your freedom is about to disappear.  Your religious liberties will be stripped away.  You won’t be able to make your own healthcare decisions.  Free choice will be gone.  Your children will suffer.  Even though you are just an innocent person minding your own business, you are about to be victimized!

Another common theme is the fear of foreigners, or outsiders. We must protect our own in-group from the vague and mysterious threats posed by those who are a little bit different from us.  The particular targeted group changes with the times, but the concept remains the same.

And, of course, someone from the Democratic Party, or some “liberal,” is to blame for all of this wreckage. Demonizing a specific target is powerful.  If a Democrat is in the White House, then the president becomes the favorite bullseye. Otherwise the demon is some other Democratic politician, typically from Congress.

Now, a political platform comprised of nothing more than hate and anger is not a very viable or sustainable political strategy, especially for a national party like the Republican Party. It may be a good strategy for a specific election or an isolated situation, but an entire political party cannot endure based upon only a message of outrage and opposition.

So why would the Republican Party devise such a strategy that has no hope of success? Well, it turns out that they did not devise this strategy. In fact, it’s not even a strategy at all. It emerged not as a result of a grand Republican master plan, but of market economics.

The extremist right-wing network of Fox News and talk radio was not created by politicians, and it is not funded by a political party.  It is not supported by donations from people seeking political expression.  It was created for one central purpose: to make money.

The founding motivation and the driving force behind all of this propaganda of hate and anger that is being disseminated throughout our society is nothing more than the almighty dollar.  It is a business, pure and simple.

And, as it turns out, the business of peddling hate and anger is a fantastically profitable one.

Rush Limbaugh raked in $80 million for himself in 2015 alone. Sean Hannity was paid $30 million. Glenn Beck is personally worth over $100 million. Bill O’Reilly’s prime-time show, “The O’Reilly Factor,” generates over $100 million per year in advertising revenue.

If these frontmen are making this much money, well then you know that their corporate masters are making even more.

Fox News has dominated the ratings as the number one cable news channel for the last 14 years and reportedly earns over $1 billion in profits annually, making it a golden goose in the overall Fox corporate empire.  Fox itself is one of the most valuable brands in the world with sales of over $13 billion.  And the tycoon behind Fox News, Rupert Murdoch, is personally worth $12 billion.

This is Big Business.

Corporate profits are greatly impacted by governmental policies.  Corporations, therefore, desire the government to be controlled by whichever political party is the most favorable to corporate profits.  And this, of course, is the Republican Party.  So it makes perfect sense that this extremist media network would use its megaphone to attempt to influence politics by urging support for the right-wing Republican Party.

Today, the bottom line is money.  Politics is secondary.  While the media content is highly political, the purpose behind influencing politics is to serve the primary objective of protecting the big profits.

Corporate profits are what led to the creation and expansion of this extremist right-wing media network.  And it is indeed a cozy little business model.  The network builds an audience by appealing to people’s fear, insecurity and anger, and simultaneously directs its audience to support the right-wing political party that best protects the network’s own profits.

It’s like a rigged game.  The content disseminated over the network masquerades as being objective and informative, but in reality the content has instead been carefully designed to promote the network’s own business interests.

What is best for corporate profits, however, is not necessarily best for a democratic society.

From a political perspective, it is certainly not healthy to incite anger and hate within a nation’s own population.  And it is not very wise to inflame hostility and rage against a nation’s own government.  From a business perspective, sure, it is perfectly understandable because a corporation can exploit this and profit handsomely from it.  But from a political perspective of creating a cohesive society and maintaining peace and harmony among the population, this is disastrous.

That is genuine political leadership.  Doing what is best for society, even in the face of adversity.

But politicians in the Republican Party could not resist.  The extremist right-wing network of Fox News and talk radio had built up an audience that could easily be exploited for political support.  Even though the extremist media network was fomenting anger and hatred that is disastrous for society overall, the network could also be used to deliver political votes to Republican politicians.

An unholy alliance was formed.  The Republican Party would allow the extremist right-wing network to promulgate its destructive propaganda throughout society in order to generate its enormous profits, and in exchange, the network would direct its audience to vote for the Republican Party.

The allure of easy votes was too great.  Exercising true leadership was too difficult.

And guess what?  It worked.

The base of the Republican Party grew more and more angry.  Their resentment against our very own government grew ever greater.  Their sense of victimization became ever more acute.  Their fury at the establishment boiled over.

And then, predictably, it backfired.

The base of the Republican Party became a Frankenstein. It became radicalized into an extreme movement that turned against the established order, including the leadership of the Republican Party itself.  It has become a monster of its own that is now roaming the countryside and terrorizing the very political party that created it.

This is the reason behind the rise of candidates like Donald Trump and Ted Cruz.  The Republican Party establishment despises these candidates, but the party has no idea how to slay these dragons.

These candidates now pose the enormous threat of causing a split within the Party that could lead to the utter destruction of the entire Republican Party itself.

It is a remarkable story.

The Republican Party has enjoyed its dance with the devil.  Now it must pay the piper.