Trans Americans are under attack: Why North Carolina's draconian anti-discrimination repeal is just the tip of the iceberg 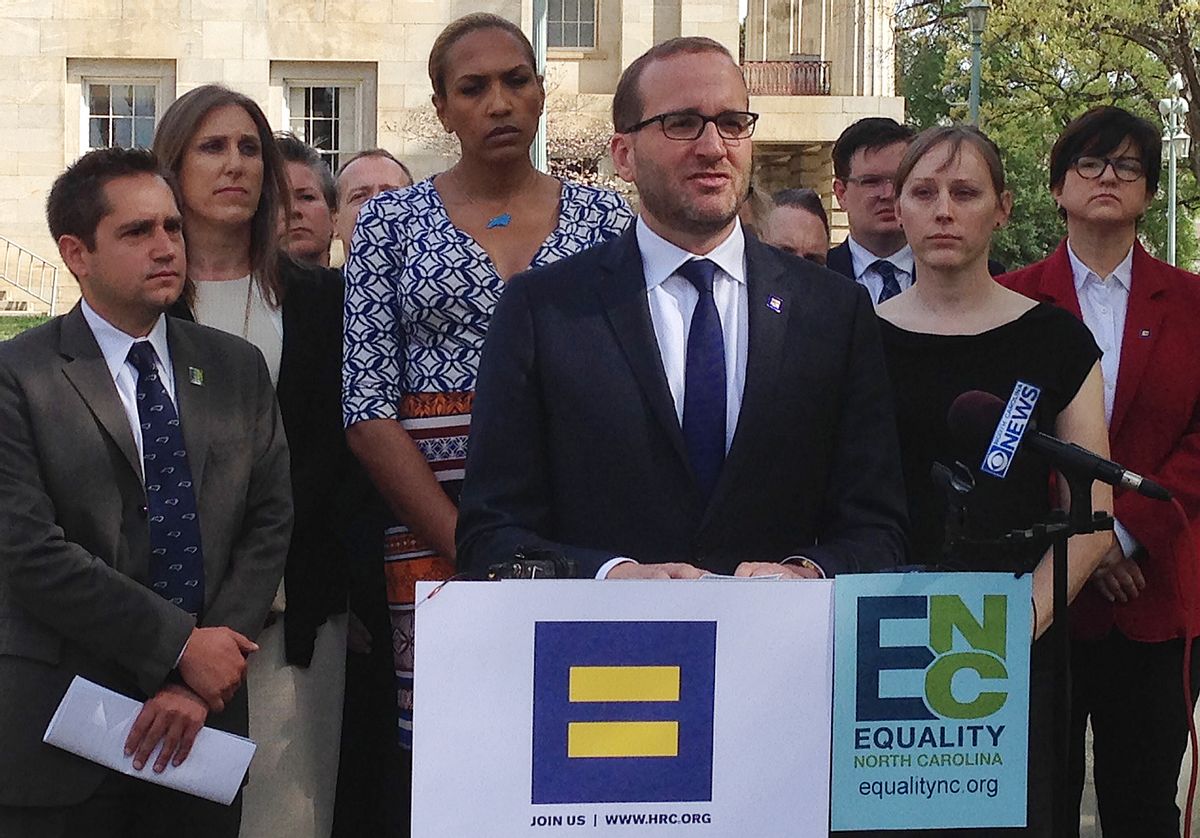 In March, North Carolina enacted one of the most regressive, ant-civil rights laws in the country.

The state’s Republican-led House of Representatives passed House Bill 2 by a vote of 83-24. Less than 10 hours later, the bill unanimously passed the Republican-controlled Senate, in a vote of 32-0, because every Democratic Senator walked out of the chamber in protest, according to BuzzFeed News.

All this happened speedily, in an effort to repeal a non-discrimination ordinance passed by the city of Charlotte, NC. Not only does HB2 repeal Charlotte’s city ordinance, it prohibits any other city or county in the state from passing a similar ordinance, essentially making it illegal to extend non-discrimination protections in the state. Two other states, Arkansas and Tennessee, have similar laws, but North Carolina’s bill goes the farthest. It bans transgender people from using restrooms that match their gender unless they’ve officially changed their birth certificate. It prevents civil suits from being filed in state court, even when the discrimination is documented by state’s Human Rights Commission. In addition to actively targeting the LGBT community, the legislation goes even further, and prohibits cities in North Carolina from mandating any employment compensation (minimum wage, benefits, etc.) beyond what is offered at the state level.

It’s an odd time for LGBT rights in America. On the one hand, marriage and adoption equality are the law in all 50 states. On the other, non-discrimination ordinances, declared the next frontier of the LGBT movement, are under attack, with relatively dismal success rates. On the one hand, there is more visibility of transgender men and women in our communities and media; yet laws discriminating against trans people are on the rise. In this mix, too, are gender non-conforming people — also vulnerable targets for violence and discrimination.

So far, North Carolina has seen significant backlash. Over 100 national companies -- including Apple, Facebook, Airbnb, Yahoo, Twitter, Salesforce, Marriott, Pfizer and Bank of America -- have signed a letter taking a stand against HB2. Wells Fargo took a stand on Thursday by lighting the 48-story Duke Energy Center in pink, white, and blue to celebrate International Day of Transgender Visibility. Georgia’s recent anti-LGBT legislation push resulted in a similar letter signed by more than 400 other companies. Demonstrating the power of such action, Indiana lawmakers last year to changed their state’s anti-gay law in response to pressure from businesses and prominent leaders. Adding their displeasure to the mix, the mayors of San Francisco, Seattle and New York City, along with the governor of New York, banned publicly funded employee travel to North Carolina in response to the law.

Again, on the one hand this kind of response is significant, and on the other it hardly serves as an effective deterrent. South Carolina state Senator Lee Bright (R) just introduced SB 1203, a bill that borrows language directly from North Carolina’s anti-LGBT law. The Tennessee House is expected to consider bill targeting transgender students in the state. Lest we think this is exclusively a Southern trend, Washington state is facing an anti-trans ballot initiative that would, among other things, would allows students to sue schools for $2,500 “for each instance in which they encountered a person of the opposite sex while accessing a public school student restroom, locker room, or shower room designated for use by the aggrieved students’ sex,” as well as to seek monetary damages “from the offending public school for all psychological, emotional, and physical harm suffered.” It would also render “null and void and of no effect” the state’s Human Rights Commission rules that guarantee bathroom access for transgender people.

What can we make of this paradox?

Central to finding an answer is acknowledging that transgender people are being disproportionately targeted in the fight for non-discrimination protections. This is illuminating some of the long-standing transphobia deep in the ranks of the mainstream LGB rights movement.

Prominent trans activist and writer Monica Roberts has written a detailed history of this struggle from a trans perspective. She argues that an honest look at LGBT movement’s history would reveal an movement includes the rights trans people when convenient, and abandons them in times of difficulty. An important moment in this history was the national fight for the Employment Nondiscrimination Act (ENDA), when the beacon of the mainstream LGB political agenda, the Human Rights Campaign (HRC), was willing to eschew including protections for transgender people in order to get the bill passed. The 2007 ENDA passed the House of Representatives, but never got a vote in the Senate. A trans-inclusive version of ENDA eventually passed the Senate in 2013, but has seen no action by the House. The current president of the HRC, Chad Griffin, has since publicly apologized for that divisive decision.

But this rift is deep, and as yet, unhealed. The media and LGBT movement (rightfully) focused their attention in 2010 on the tragic death of Tyler Clementi, a gay, white Rutgers student who committed suicide after his roommate filmed him having sex.

In 2013, black transgender teen Islan Nettles was killed, in an apparent hate crime. Nettles’ story was buried on page 16 of The New York Times while the Clementi story was front page news.

Clementi's death even became the inspiration for the “It Gets Better" campaign, led by Dan Savage.

Many transgender Americans -- who are disproportionately targeted for hate crimes --  felt the campaign rang hollow. For many transgender people, it does not get better at all. In fact, there is an epidemic of violence against them, and specifically against transgender women of color, that continues unabated throughout the country.

In the face of this epidemic, broader movement for LGBT rights cannot run campaigns for anti-discrimination legislation that don’t acknowledge that transgender people are at the center of this fight. The movement for LGBT rights must see that transgender rights are, in fact, at the core of the fight for justice and equality. Without this acknowledgement, and without the leadership of transgender activists, and transgender activists of color, the campaigns will ring false and incomplete. They will continue to sacrifice the most vulnerable members of our community for limited gains.