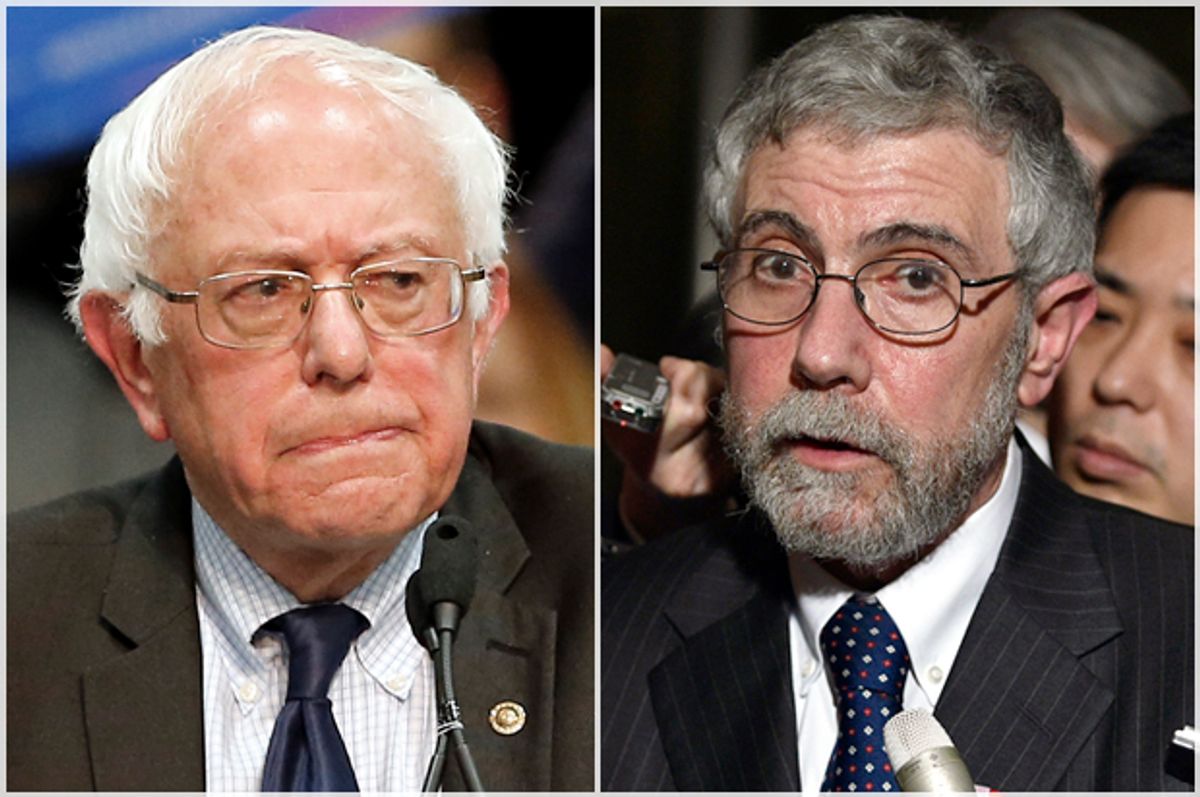 As pundits go, Paul Krugman is often a voice of sanity in a whirlwind of noise. But his latest column, titled “Sanders Over the Edge,” badly misfires.

The point, presumably, is to dismiss Sanders has a disconnected lightweight, a candidate coasting on slogans and devoid of substance. “From the beginning,” Krugman writes, “many and probably most liberal policy wonks were skeptical about Bernie Sanders. On many major issues – including the signature issues of his campaign, especially financial reform – he seemed to go for easy slogans over hard thinking.”

There’s a modicum of truth to this complaint. Bernie can be a one-trick pony on the stump, over-promising and relying on oft-repeated platitudes. But there isn’t a presidential campaign about which that can’t be said. And Sanders, generally speaking, is among the most substantive and least focus-grouped candidates in recent history. In any case, Krugman goes much farther than this:

“Some Sanders supporters responded angrily when these concerns were raised, immediately accusing anyone expressing doubts about their hero of being corrupt if not actually criminal. But intolerance and coltishness from some of a candidate’s supporters are one thing: what about the candidate himself? Unfortunately, in the past few days the answer has become all too clear: Mr. Sanders is starting to sound like his worst followers. Bernie is becoming a Bernie Bro.”

Krugman is objecting to Sanders recent decision to step up his attacks on Clinton; in particular, his focus on her financial ties to the fossil fuel industry, as well as his recent – and admittedly ill-advised – remarks about Clinton not being “qualified” for the presidency.

To be clear: there is no defense of Sanders' comments about Clinton’s qualifications. There are a hundred different critiques one can make of Clinton, but her qualifications aren’t one. This seems to me beyond dispute. Sanders may have been baited into saying this by some misleading reports, but that’s no excuse: It was a mistake – end of discussion.

But to argue, as Krugman does, that the Sanders campaign has “lost its ethical moorings” by going after Clinton’s relationship with fossil fuel lobbyist is wrong-headed and misses the entire point of his campaign. Sure, we can quibble about the specific amount of dollars Clinton has accepted from the industry, and perhaps Sanders has exaggerated on this front, but there’s no question money has indeed been exchanged.

And it’s not just about campaign donations. As Naomi Klein notes in The Guardian, “there’s all the cash that fossil fuel companies have directly pumped into the Clinton Foundation…Exxon, Shell, Conoco Phillips and Chevron have all contributed to the foundation.” Against the backdrop of a recent International Business Times investigation into at least two of these companies lobbying Clinton’s State Department about the Alberta tar sands, it’s essential to raise these questions.

It’s perfectly fair – and necessary – to ask, as Sanders has, if the money Clinton has received from the fossil fuel industry has influenced her policies in any way, especially when Sanders has accepted zero dollars from this sector. “Holding people accountable for their past is O.K.,” Krugman writes,” but imposing a standard of purity, in which compromise or misstep makes you the moral equivalent of the bad guys, isn’t.”

No doubt there’s an element of Bernie’s base obsessed with ideological purity (I’ve experienced this firsthand), but that’s not the fault of the candidate. Sanders has said explicitly that he would support Clinton over any GOP candidate. “On her worst day,” Sanders conceded at the first Democratic debate, “Hillary Clinton will be an infinitely better candidate and president than the Republican candidate on his best day.” Does that sound like a candidate drunk on his own purity?

The truth, as Krugman tacitly admits, is that these complaints are less about the merits and more about protecting Clinton. “Is Mr. Sanders positioning himself to join the ‘Bernie or Bust’ crowd, walking away if he can’t pull of an extraordinary upset, and possibly helping put Donald Trump or Ted Cruz in the White House? If not, what does he think he’s doing?,” writes Krugman.

Here’s what he’s doing: speaking for a large bloc of voters for whom these questions really matter. Sanders has said from the beginning that it will take much more than a single election to accomplish meaningful change. Is there a gap between Bernie’s goals and the political capital needed to accomplish those goals? Absolutely. But the only path forward involves greater participation and awareness. Clinton, qualified though she is, represents a system against which Sanders is protesting. The Wall Street connections, the philanthrocapitalism of the Clinton Foundation, the pro-corporate policies – all of these are fair game. Discussing these issues isn’t imposing a “purity” test – it’s the essence of Sander’s campaign.

This notion that Sanders ought to adhere to some nebulous “good behavior” standard for the sake of a general election is an affront to his campaign and its supporters. The “not qualified” blunder aside, Sanders has been exceedingly respectful of his competitor. But he has every right to emphasize the ways in which Clinton exemplifies the cracks in our corrupt system.