Bernie does have a plan to break up the banks: Enough with the handwringing over that Daily News interview

Sanders' answers on financial reform were entirely reasonable. You'd never know it from their hysterical coverage 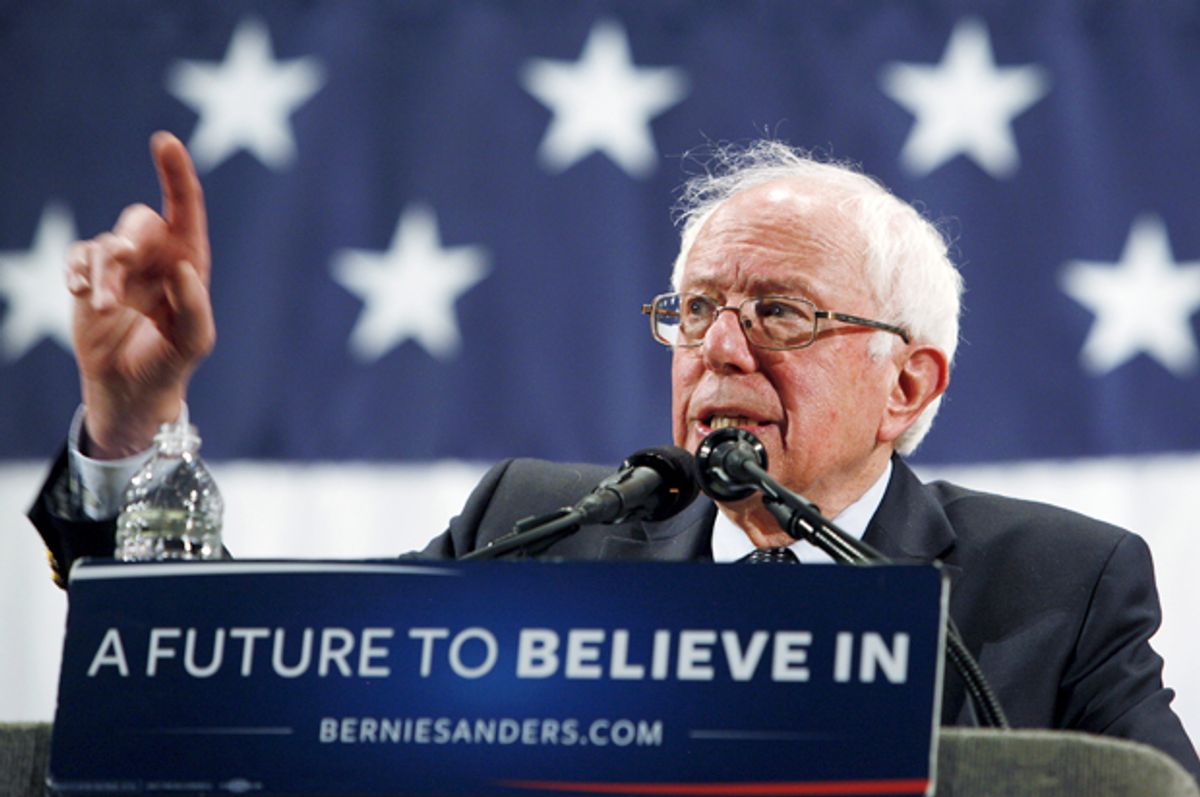 Bernie Sanders gave some fairly normal answers on financial reform to the New York Daily News editorial board. Someone sent it to me, and as I read it I thought, “Yes, these are answers I’d expect for how Sanders approaches financial reform.”

You wouldn’t know that from the coverage of it, which has argued that the answers were an embarrassing failure. Caitlin Cruz at TPM argues that Sanders “struggles to explain how he would break up the banks,” and that’s relatively kind. Chris Cillizza says it was “pretty close to a disaster” and David Graham says the answers on his core financial focus are “tentative, unprepared, or unaware.” Tina Nguyen at Vanity Fair writes that Sanders “admits he isn’t sure how to break up the big banks.”

This is not correct. Sanders has a clear path on how he wants to break up the banks, which he described. Breaking up the banks doesn’t require, or even benefit from, describing the specifics of how the banks would end up, either for his plans or for the baby steps Dodd-Frank has already taken.

Generally, I believe Sanders would benefit from taking the important points Clinton has made in expanding how to tackle the financial sector as a whole. But bad arguments are bad arguments, and the arguments against Sanders here are bad.

There are three ways we can break up the banks:

Here’s the first exchange that people are citing:

Sanders: How you go about doing it is having legislation passed, or giving the authority to the secretary of treasury to determine, under Dodd-Frank, that these banks are a danger to the economy over the problem of too-big-to-fail.

Daily News: But do you think that the Fed, now, has that authority?

Sanders: Well, I don’t know if the Fed has it. But I think the administration can have it.

Sanders is clearly saying that he wants to push on the first (“legislation passed”) and second (“secretary of treasury to determine”) approaches, two projects you can do at the same time. He’s emphasized Section 121 in the past. I wish he’d emphasize the third approach more, as that’s where the fight currently is, but his answer is fine.

If anything, Sanders is too wonky. I think the Daily News and commentators on this mean regulators as a whole, instead of the specific powers of the Federal Reserve itself, when they ask if the Fed has that authority already.

Does the Fed have that authority? The Federal Reserve does have an extensive set of powers under the second and third approach, though they aren’t unilateral. But it also isn’t clear how much the Fed could push if it truly wanted it. Sanders is correct to say it’s unclear how far the Federal Reserve can go, but it is clear that the Treasury Secretary can lead FSOC to it.

The real problem with Sanders’s language on this topic is his one-year promise. You’d need to replace a lot of regulators to try this approach, and that takes time, and even then it’s a hard slog. But it also seems like an area where the campaign rhetoric is meant to diverge from the policy analysis.

A lot of people are attacking Sanders for not saying how he’d specifically break up the banks based on this exchange:

Daily News: So, what I’m asking is, how can we understand? If you look at JPMorgan just as an example, or you can do Citibank, or Bank of America. What would it be? What would that institution be? Would there be a consumer bank? Where would the investing go?

Daily News: No. But you’d be breaking it up.

Sanders: That’s right. And that is their decision as to what they want to do and how they want to reconfigure themselves.

This is both a good and correct answer. This may not be intuitive to people who haven’t thought it through, but it’s not necessary, or even desirable, for regulators to specifically describe how to break up the banks. Instead, tell them where they have to end up in terms of size—say no larger than $500 billion—and let them figure out the best way to get there.

Let’s have someone else who is well-respected among the financial reform community make the point. Here’s Daniel Tarullo of the Federal Reserve from 2012 talking about some of the positives of a size cap on banks: “Another attraction of this form of proposal is that, even as it places constraints on the potential size and composition of a firm’s balance sheet, it allows relative flexibility to the firm in meeting that constraint, particularly when compared with proposals for prohibitions on commercial bank affiliations with other financial firms.”

In the speech Tarullo is ultimately critical, bringing up many objections to a hard size cap. Yet even though he’s critical, he agrees with Sanders on the positives here.

You tell the banks they can’t be a certain size, and they themselves choose how to break themselves up. Perhaps it’s by region, business lines, market segmentation, who knows? But there’s an underlying economic logic to maximizing the value of the resulting firms given the (regulatory) constraint, which is a selling feature of markets.

This is how Dodd-Frank is currently working too. Firms such as JP Morgan slimmed down slightly in response to tougher prudential regulations like capital requirements. They themselves figured out what to sell off to reduce their regulatory requirements based on value. Activist investors are calling for breaking up AIG in response to Dodd-Frank, and they’ll know the right way to do it if it happens. Leaving it to the market to determine the most efficient way of handling requirements is a bonus, not a weakness, of the approach.

We don’t know what MetLife means yet

Sanders says the recent MetLife court decision from last week is “something I have not studied, honestly, the legal implications of that.” The ruling, as I type this, is sealed and has still not been released, so we have no clue what the opinion even is yet. It will likely have serious, negative consequences, but it’s too early to understand what it means for all of financial reform going forward.

Sanders thinks Obama should have tried for criminal convictions

Something is being made of Sanders saying he doesn’t know the specific indictments that should have been brought against Wall Street. Sanders: “I believe that that is the case. Do I have them in front of me, now, legal statutes? No, I don’t.”

An easy way to understand this is to assume that a Sanders presidency would be less risk-averse in seeking criminal charges. A common refrain from defenders of the Obama administration’s approach to criminal prosecutions is that they didn’t want to bring a case unless it was a slam dunk, and there weren’t slam dunks, so they preferred taking easier settlements instead. In general, they didn’t push as hard as they could have. (I don’t think this is controversial.) Sanders would instead have tried on cases that weren’t slam dunks, seeing how far they could have gotten. The issue isn’t the specific statute, but whether you push the investigations as aggressively as you can when it comes to Wall Street.

There’s a lot to fight about with the approaches the candidates take on the power of the financial sector over our economy. It’s important to understand what needs genuine answers and criticism, and I don’t see this as on that level.