"Party unity" is bogus: The Hillary-Bernie debate is crucial, and won't doom the Democrats in the fall

Will the Sanders-Clinton struggle lead to a gruesome fall defeat? History says no — but that's not the big question 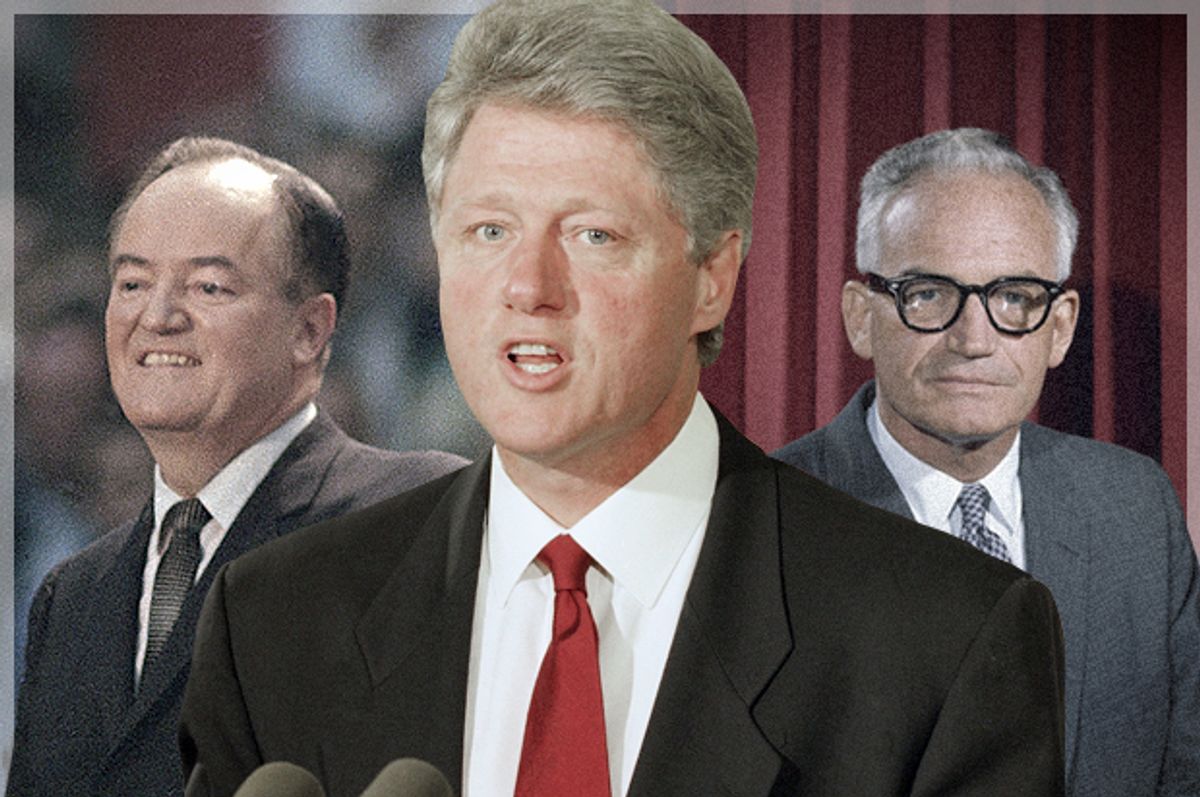 With the renewed outbreak of hostilities between Hillary Clinton and Bernie Sanders following the latter’s big win in the Wisconsin primary last week, we are once again hearing the mantra that all the discord and name-calling and surrogate warfare must end “for the good of the party,” lest the Democratic nominee be fatally injured before the fall campaign begins. A number of things should be obvious about this discourse, starting with the fact that we’re only hearing it within one of the two parties this year, and that compared to the amateur zombie-dentist convention on the Republican side, Bernie and Hillary are one of history’s great romances.

Even so, party-unity rhetoric has been a constant refrain in the Democratic race ever since it became clear that Sanders presented a real threat to the Clinton coronation, and wasn’t just another hapless left-wing sacrifice in the Dennis Kucinich vein. (I don’t mean to bash Kucinich! He’s a terrific guy, whose timing was off by a decade or so.) It’s an old melody, rendered somewhat more compelling this year by circumstance: If we don’t get over this childish idealism and rally around the normal, sensible and “electable” candidate, we’ll bring on the Reign of Eternal Night, otherwise known as Republican control of all three branches of government. It must be admitted that when you’re talking about the mathematical possibility of President Trump (or, even worse, President Cruz), it’s a prospect to take seriously.

It’s also worth noticing that calls for comity and party unity, for mellowing the tone and dampening the disagreements and standing aside to let the leading candidate win by acclamation, are in themselves tools of political warfare. The only people who ever bring those things up are those who stand to benefit. As you may have noticed, the Republican leadership and its financial backers are taking the opposite tack; they’re eager to drag the primary campaign on as long as possible and inject it with cobra venom, in the hope that something or someone can wake them from their Trumpian nightmare. Party unity is at best a question; it isn’t an answer. It makes for incoherent political philosophy and inconsistent results in practice, and rests on various premises that fall somewhere between unproven and downright false.

As various commentators have pointed out (including Salon’s Jack Mirkinson), by the standards of the 2008 race between Clinton and Barack Obama, this year’s Democratic primary campaign has been relatively cordial. Obama, of course, was so badly damaged by the enduring outrage of Clinton supporters that he lost to John McCain in a landslide. (No, not in reality. But probably in someone’s unpublished alternate-history novel.) That’s a relevant data point, and one that should remind us that a bitter primary contest doesn’t necessarily have much to do with what happens in November.

As the current Democratic frontrunner cannot possibly have forgotten, Bill Clinton emerged from a brutal, mud-slinging primary campaign in 1992 and won easily in the fall. John F. Kennedy, Jimmy Carter and both George Bushes prevailed in memorably heated primary contests and then won narrow elections. (OK, only the elder Bush was actually elected: Oh, snap.) You can cite counter-examples of candidates who sailed through the primary season and won in November, like Ronald Reagan in 1980. But John Kerry’s relatively smooth path to the Democratic nomination in 2004 didn’t help much. Even the supposedly classic examples of parties ripping themselves apart with ideological infighting yield mixed results. Hubert Humphrey nearly won the 1968 election, despite not even having run in the primaries and garnering the Democratic nomination through backroom deals at the most disastrous convention ever. (Paul Ryan is reading up on this right now!) Barry Goldwater, on the other hand, vanquished the GOP establishment with the insurgent conservative crusade of 1964, and then got less than 39 percent of the popular vote, which remains the most lopsided defeat in history.

In short, there is no consistent pattern to suggest that a contentious primary campaign leads to electoral doom. The only pattern I see, in fact, is that the party-unity argument, and the threat that winter is coming, is consistently used as a club to bash dissidents. It seems wildly unlikely that the Democrats are heading toward any version of a Goldwater scenario in 2016, or even a Humphrey scenario. Which of our two parties faces that prospect, or something worse, is abundantly clear. But I think this entire line of argumentation undersells the symbolic and ideological significance of the Clinton-Sanders battle, which is exactly what the advocates of mandatory party unity are trying to deflect or deny or ignore.

Clinton and Sanders are now heading into a climactic April 19 showdown in New York — one candidate’s current home state, and the other’s birthplace — that will likely determine whether the 2016 primary campaign begins to wind down or drags onward into June and beyond. As a matter of cruel political fact, Sanders probably can’t win the Democratic nomination even if he prevails in New York. But he clearly raises his odds to a nonzero number, and makes the endgame complicated and painful for his opponent. Win or lose, Sanders’ continued presence in the campaign — and his sharpened rhetoric about Clinton’s connections to corporate money and her warmongering foreign policy — has exposed Clinton’s fundamental contradictions, and those of the Democratic Party. That’s what the party-unity crowd finds unacceptable.

For the Clinton campaign, the Democratic Party establishment and their media boosters (I’m looking at you, Paul Krugman), the suggestion that it’s time to pour some serious cold water on the Bern is both standard-issue politics and something larger than that. This week a Los Angeles attorney named Dana Perlman told The Wrap, a Hollywood trade publication, that he was “disappointed” by Sanders’ harsher tone in recent days, and worried it would be “destructive for the party, which must unite behind our nominee and retain the White House.”

Well, sure. Perlman is one of Hillary Clinton’s biggest California fundraisers, and stands at the intersection of two elite groups that have bankrolled the Democratic Party since its reinvention under her husband’s administration, meaning the legal profession and the entertainment industry. What else is he going to say? What Perlman means, in English, is that the Sanders campaign is destructive for the Democratic Party as he understands it, which must unite behind his preferred candidate and retain the White House on behalf of the interests he represents. There’s nothing wrong with a rich dude arguing his case; ideological combat is the essence of politics. But let’s not insult each other by pretending that a millionaire Beverly Hills lawyer’s vision of the Democratic Party has much in common with that of the Bernie Sanders electorate.

Party-unity rhetoric, and the argument that “we” will lose in November if we let our dirty laundry be seen in the spring, has been used for decades in both parties to quell internal dissent and rally support for an establishment-ordained frontrunner. It’s how they wind up with dismal nominees like Kerry or Mitt Romney, known quantities who are exciting to no one and disheartening to many in the party’s base, but are deemed acceptable to broad swathes of the population. Perhaps the single most striking fact of the 2016 presidential campaign so far is that one party has staged a spectacular grassroots rebellion against this model, and the other has tried to. Say what you will about Donald Trump, but the people who like him really, really like him, and the same is true of Bernie Sanders. There were too many “why Trump is like Sanders” articles early in the campaign season (yeah, mea culpa), but that’s where they contained a chewy nugget of truth.

I have repeatedly argued that the outcome of the Clinton-Sanders race (which was pretty much ordained in advance) is less important than the yawning ideological gulf it reveals within the Democratic coalition, and what it tells us about the party’s future. It’s only overstating the case a little to say that some version of the Republican civil war lies ahead for the Democrats, and that we see it in embryo right now. Still, there is also the matter of electing a president who will take office next January. I am not so cynical as to pretend that’s irrelevant, or that a Cruz or Trump administration (each in its deliriously different way) couldn’t make a bad situation immeasurably worse.

Hillary Clinton’s backers and supporters, I suspect, will ultimately get some version of the party unity they’re clamoring for, and most likely the president they want too. Against a fractious and divided opposition, she is far more likely to emulate the historical example of Bill Clinton, or even Lyndon Johnson, than that of Humphrey. But all along the Clinton wing of the Democratic Party has appeared to gird itself for defeat rather than victory, and has prepared in advance to blame a possible Humphrey-geddon on too much internal opposition, too much dissent and too much immoderate left-wing zeal. That anxiety is not about 2016 at all. It’s about realizing that their days are numbered.