Republicans really fall for this nonsense: The GOP is the party of stupid, but its voters are the deluded ones 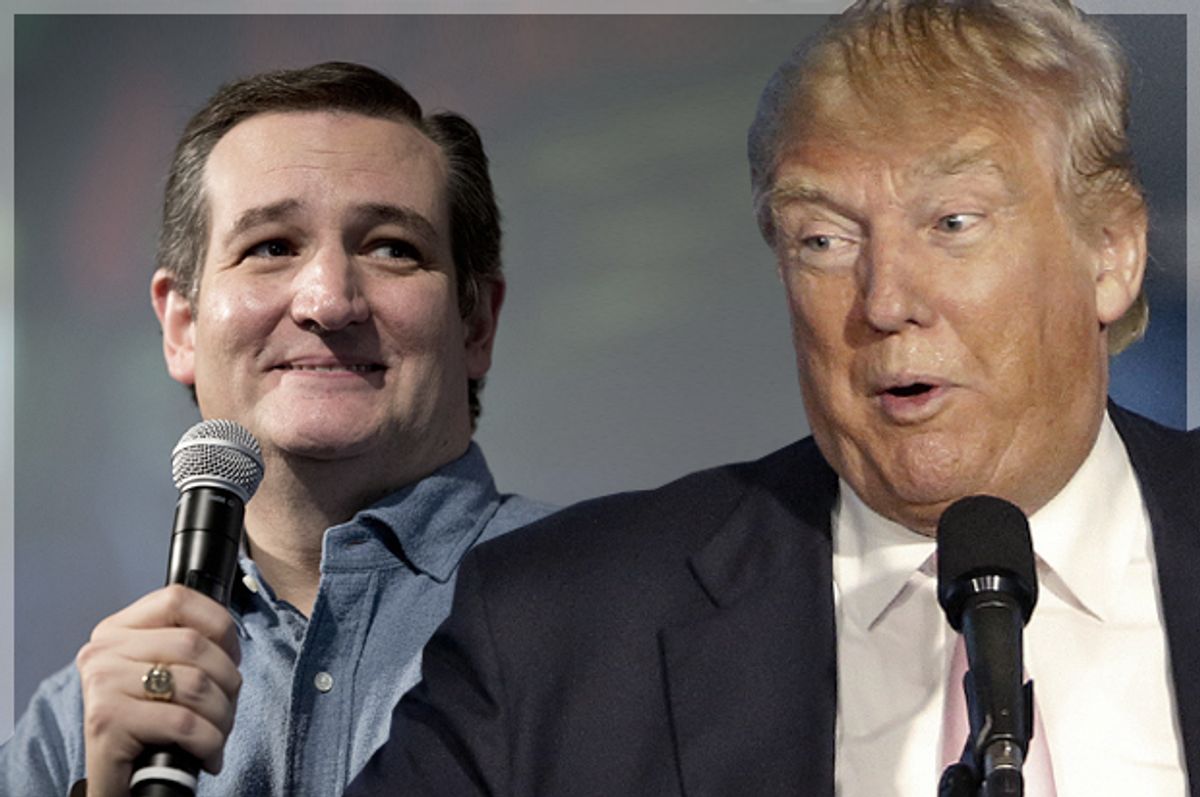 One wonders how Republican primary voters can listen to the disruptive, yet vague, stump speeches of Donald Trump and Ted Cruz and believe that they have any specific plans to govern. A celebrated essayist, roundly criticizing the partisan divide, has written forcefully of “the Mob of Malcontents” who are quick to believe in “absurdity,” who are “daily nourished … by fiction and delusion.” He goes on to assert that the “political faith of a Malcontent” is altogether founded on imagining wishes will come true, and giving credit to what is said that is pleasing to his ear.

The insightful author of these words is the worldly English opinion writer Joseph Addison, a Latin scholar, playwright, poet and politician writing in 1716 in a journal titled "The Free-Holder." It was not the Republican Party that troubled his mind; it was the Tory Party. He was complaining about political unreason and the credulity of a majority — even of educated people — precisely 300 years ago.

Let’s be honest. While the Malcontents of our day tend to be those who follow blindly the exaggerated claims of demagogic self-lovers Trump and Cruz, Addison’s plaint should not be adjudged party-specific. A republic cannot function smoothly if voters accept at face value the impassioned promises of candidates whose record of actual accomplishment is more modest than they claim. Or, to single out the GOP, voters should be properly informed when a presidential candidate’s public actions or votes in Congress do not represent real commitment to improving conditions for ordinary people.

What can we do about voter gullibility? When the Republican Party insists that President Obama has been bad for the economy, and that lower taxes on everyone is always the best stimulus (no matter what conditions prevail), it is more than a question of “faith” in the leadership of the GOP. When candidates say they believe the science on climate change is uncertain, are they doing anything other than promoting wishful thinking?

Addison saw the political problem clearly. He wrote in an era when it was easy for people to acknowledge submission to their superiors, when “party” was defined not as a mainstream organization but as an unwholesome faction bent on destabilizing what was good in political society: “Our Children are initiated into Factions, before they know the Right Hand from their Left ... They are taught in their infancy to hate one half of the Nation.” In this he could as well have been talking about us. Wait a minute: The United States Constitution was written and enacted at the end of Addison’s century, without any mention of parties but with the purpose of introducing such checks and balances that the resulting spread of liberty would represent a healthy improvement over the British model. A belief in American exceptionalism grew out of the latter assumption. Instead, we have experienced disunion on a grand scale (without even counting the Civil War) and have replicated the worst of former British ills.

Malcontents, by Addison’s definition, need to be “undeceived” in the interest of advancing civil society. Malcontents, he is saying — and he’s right — do not want honesty. Bernie Sanders, bless his Democratic Socialist heart, is trapped in a very unlikely version of the American Dream if he believes that all students at public colleges and universities will pay no tuition. Even if Wall Street speculators kick in the billions he would exact from them, it wouldn’t be nearly enough; it will never happen until Democrats take over all the stingy Republican-led state legislatures. Who is that gullible? Apparently they number in the millions. So it’s not just Republicans, though their deceptions are obviously more cynical.

In assessing the candidates in both parties, Politifact finds that Hillary Clinton edges out Sanders as the least dishonest (let us frame it this way rather than say “most honest”). While she underplays her opposition to Wall Street, her falsehoods are, for the most part, on the order of “We have more jobs in solar than we do in oil.” She favors the phrase “empirical evidence,” which Mr. Addison would no doubt approve. Yet in televised punditry, the most often heard critique of Hillary is that she lacks the fundamental honesty of Sanders.

The real difference in honesty is that which separates the opposing parties. For the two Democratic contenders, Politifact finds that about fifty percent of questioned claims are either true or mostly true; for Trump and Cruz, the percentage is closer to single digits. Cruz singularly blames Barack Obama for the movement of American jobs overseas, redefines “carpet-bombing” at will, and goes nuts over imaginary federal government conspiracies; Trump’s pants are on fire so often that he will have to spend some of his billions on a new wardrobe. (Politifact need not investigate that figurative statement: some hyperbole is not intended to deceive.)

The predominantly white Malcontents who have gravitated to the GOP frontrunners in 2015-2016 eagerly consume the junk food of a party that denies or twists data, encouraging its supporters to believe that social programs don’t help them, but instead support the unwholesome lifestyles of people of color and job-killing illegal immigrants. The GOP welcomes to the fold all who are incapable of dissociating economic anxiety from their inherited racist assumptions, those whose anti-intellectualism is ready to be exploited (or who believe Sarah Palin can actually interpret everyday reality for them).

Proffering fictions, Republican politicians who serve and are served by moneyed interests repackage the facts about poverty in America. They don’t react to empirical evidence, i.e., the majority of our poor are elderly and/or disabled; the married-with-family poverty rate in the U.S. is at least six times that of the Democratic-Socialist nations of northern Europe; and the number of impoverished Americans definitely includes all kinds of white people. Conservative policy is to eradicate the FDR and LBJ reforms that were designed to combat racism and a class-based inequality of access to power and opportunity. Empirically speaking, what years do the GOP cite, when conservatives’ legislative initiatives remedied economic malaise, benefited wages (other than at the top) and improved the overall standard of living? Eisenhower doesn’t count: he kept taxes high, supported labor unions and didn’t try to undo New Deal programs.

Back to our initial focus, then. What is to be done about all the political lies to which we are subject during campaign season? The clear-headed recognize that overturning Citizens United, making all elections publicly funded and redistricting at the congressional level on the basis of non-partisan factors will help reverse the trend toward institutional corruption of our electoral politics. But, as far away as these legislative priorities appear right now, it’s only a start. You can’t accomplish anything without an informed public. By definition, an informed public is resistant to questionable assertions; an informed public looks not for a savior but for a reasonable reformer.

Instead, we are overwhelmed by Malcontents who feed on “fiction and delusion” because critical detachment is hard for human beings to muster. It’s why they love the theater and go to action movies and read romances: real life is pressure-filled, contentious and demanding. When offered positive emotional engagement, we take the bait; we get something off our chest; it feels good. Political campaigns, like rooting for sports franchises, tap the universal desire to exhibit strength and emerge victorious, even if it’s vicarious and it’s not nearly as much about us as we imagine. Like the World Series or the Super Bowl, identifying with a team is a way to experience hope; the media enlarge the personalities involved, and for an extended moment we get to identify with a “huge” idea. Exaggeration is good business. Rarely do we share in a collective response on the order of July 1969, when the cause of humanity, as well as the cause of science, was enlarged as humans first walked on the moon. It didn’t matter who was president. A government program, as it happens, demonstrated the possibility of matching the dream with empirical fact. If only there were more such moments of productive joy.

We all want our candidates to be earnest in their solicitation of our vote but the system seems to require that they “go negative,” thereby awakening the Malcontents whose faces and placards and interruptions in turn delight TV executives. We ask — naïvely, it seems — for statesmen and stateswomen to discuss and debate honestly, to exhibit their judgment on critical issues and not simply calculate their positions on the basis of what sells. That was how our inspired republic was supposed to function.   We are learning, instead, how an authoritarian (or an entertainer) can conceivably come to power.

Joseph Addison, writing in 1716, shows us that we have scarcely improved over the past 300 years. He understood the politics of deception, how easily promises flow in recognition of the credulity of humans. If he saw glorification of kingly virtue as snake oil, we see its modern incarnation in the banal tendency toward idolatry that reality TV competitions aim to draw forth. Addison was celebrated by the founders of the United States for his work as coauthor of the witty, widely read "Spectator" series of essays, which took as its conceit its protagonist’s preference to live in the world as a Spectator, rather than as an active striver. Addison’s Spectator tried to discern the difference between claims to authority and fractured opinion; the American voter is a dumbed-down version of his Spectator, made a disagreeable Malcontent by being led to fear and, in consequence, led to impulsive adulation.

Addison wrote presciently of our commitment to exaggerated images and managed causes when he noted the flaws of those who enjoy power too much. Unlike a more broadly literate, knowledge-seeking person, one who lives and breathes politics and has little time to take up more refined pursuits is in it for the wrong reasons. “A mere Politician is but a dull Companion,” he said. But here we are. Every few years (or perhaps it’s without pause now), servants of the public put on their makeup, hire pollsters and return to the old playbook of quoting disturbing facts while professing to be the voter’s friend and advocate … if not their saving grace. And we fiction-friendly Malcontents keep arising, coming back for more.