"Diabetes, here I come": Starbucks drink-shaming is bullying, and it's part of a larger problem

This snarky comment from a barista is all too common in our food-policing, fat-phobic, rude culture 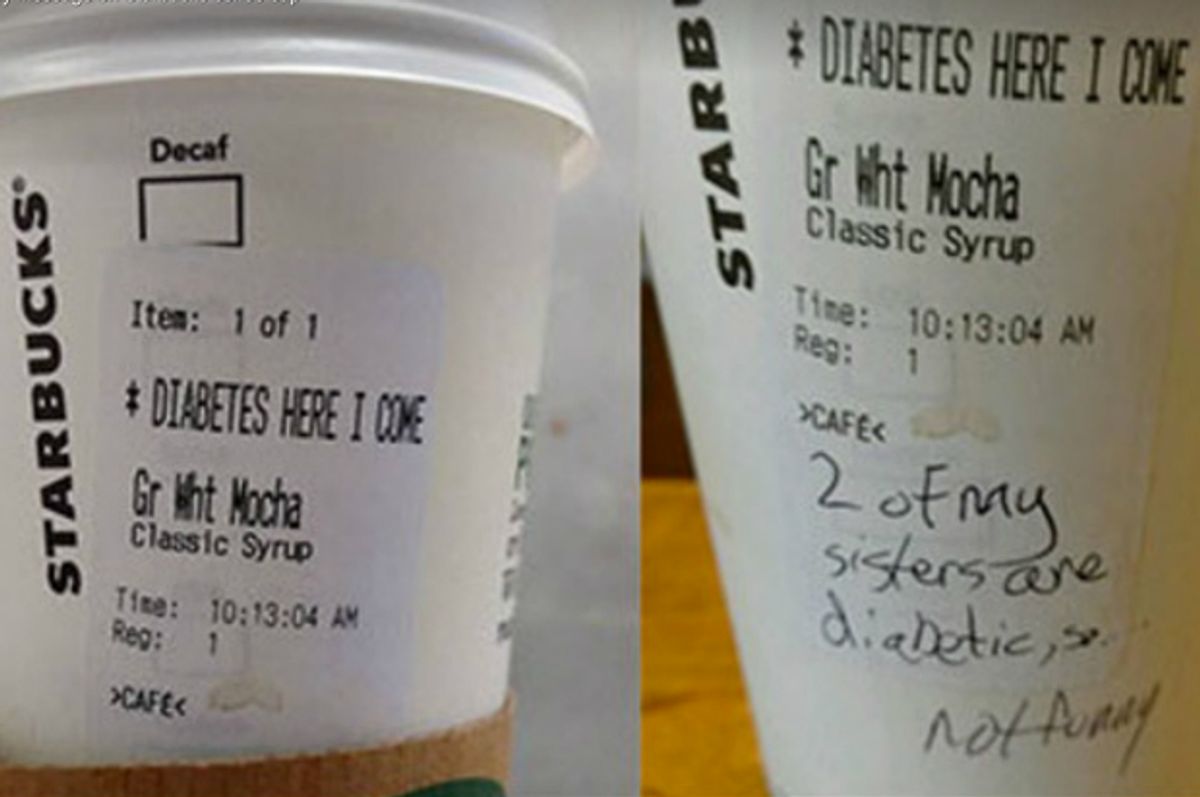 When you go to Starbucks, you may expect to wait on a long line or have your name spelled incorrectly on your drink order. What you likely don’t expect is to be shamed for your order, which is exactly what happened last week to a Florida customer who ordered a giant white mocha, only to find his cup labeled with the words “Diabetes here I come,” reported Action News Jax.

The customer, who wishes to remain anonymous, responded by replying on the cup, “2 of my sisters have diabetes, so not funny.” He told the TV channel, “That first word just automatically brought the picture of both sisters in my head, and I was taken aback.” A Starbucks representative issued the following apology, “We strive to provide an inclusive and positive experience for our customers, and we're disappointed to learn of this incident. We are working directly with the customer to apologize for his experience, and with our partners (employees) to ensure this does not happen again.”

While it’s abhorrent that a member of a dining establishment’s staff would dare to judge the order of a customer—and we might question why such a person is even working for a company that offers 80,000 drink options, many of which presumably contain similar amounts of sugar, if they find them so offensive—the barista’s actions are part of a larger cultural trend of food shaming those whose dietary habits don’t conform with the current healthy eating trends du jour.

It’s one thing for consumer advocacy groups to work to educate the public about exactly what goes into their food, such as British group Action on Sugar, which found that one Starbucks drink, hot mulled fruit grape with chai, orange and cinnamon, contained 25 teaspoons of sugar. It’s quite another to essentially accost people with unsubstantiated judgments that only serve to demean those wise enough to make their own decisions about what goes into their body.

Our sense of ownership and superiority over what other people consume has run completely amok, and this Starbucks barista is merely the latest example of our obsession with telling others how and what to eat. At the heart of food shaming is the belief that there’s one correct way of eating, and a more sinister underlying belief that health—or at least, a random layperson’s ideas about health—supersedes all other factors that go into the decision. It’s what lead an obnoxiously self-important stranger to yell at Huffington Post Executive Women’s Editor Emma Gray, “Hey, girl, you shouldn’t be eating that. You’re gonna get fat!” when all she wanted to do was enjoy a late night cup of frozen yogurt. It’s what prompts moms to shame other moms over what they feed their kids, or the Pediatric Society of Rio Grande to slam breastfeeding mothers for their food choices because “Your child is what you eat.”

Food shaming and fat shaming tend to go hand in hand; after all, the implication of the Starbucks diabetes cup was that if the person did develop diabetes, it would be their fault. Shame on them for not taking their coffee black, or perhaps just with skim milk.

Last week, Model Iskra Lawrence posted an epic response to a commenter who tried to body shame her by asking “Why is it acceptable these days to have big fat asses?” and going on to say that obesity is being normalized because of “people like her eating too many bags of crisps.”

So Lawrence used the perfect vehicle of Instagram to share a glorious photo of her wearing only a bra sensually luxuriating surrounded by numerous bags of crisps (aka, potato chips), along with a slow motion video of her enjoying said chips. The message? Essentially, that she could care less what this person thinks of her body and she’ll eat what she damn well pleases. Amen to that.

We’ve morphed into a culture that thinks we can feel superior about our own diets by putting down those of others, an infinite loop of one-upmanship that pits us against each other—and against food itself. The ultimate culmination of this way of thinking is what leads to the type of self-shaming Amy Schumer expertly lampooned in her skit “I’m So Bad,” where a group of women eating a restaurant rush to outdo each other in relating their tales of gluttony.

Whether food shaming is as overt at writing “diabetes” on a cup or telling someone they’re going to get fat or the more subtle “Are you sure you want to eat that?” offered up at an otherwise friendly meal, the effect is the same. The person is no longer going to enjoy whatever they’ve just been about to consume in quite the same way; how could they? You’ve basically just ruined someone’s day—or given it your best effort. Why aren’t we calling food shaming what it really is—bullying? It may not involve threats of violence, but I can pretty much guarantee that a food shamer’s words will echo long after the individual incident has passed, making the recipient feel they should agonize over ever morsel that goes into their mouth. The result is likely to make eating not a joy, but a troubling burden; how on earth is that healthy for anyone?

Telling others how to eat often starts at home, as Jane Fonda demonstrated in an essay on feminism for Lenny Letter, writing, “when I hit adolescence and the specter of womanhood loomed, all that mattered was how I looked and fit in. My father would send my stepmother to tell me to lose weight and wear longer skirts.” How many of us have had family members offer up similarly awful comments about our bodies? This winds up being the legacy many of us carry into adulthood, and when strangers take it upon themselves to comment on our food choices, they’re often adding fuel to a long-simmering fire of guilt and shame when it comes to eating.

Maybe this kind of food shaming is the result of assuming there’s something inherently wrong with eating for pleasure, when in fact that’s precisely why we have such sensitive taste buds. I’m glad that Starbucks at least had the decency to apologize, and hopefully they will educate their staff that not only is judging a customer’s order bad business, it’s a harmful way of looking at food and consumption.

Bottom line: it’s not my place or yours to judge how or why others eat the way they do. If you think it is, you should be asking yourself whether you’d want a stranger hovering over your ever meal, analyzing its nutritional breakdown. If you find yourself sympathizing with the Starbucks barista, or silently cataloguing what your fellow supermarket shoppers are putting in their baskets, I urge you to ask yourself what gives you the right to think you know best? Focus on your own eating and drinking habits, not anyone else’s, whether you know them or not. Unless they ask for your opinion, don’t assume someone wants to hear it whether you’re sitting down to dinner at home, at a restaurant, or ordering coffee.