This is why people don't trust Hillary: How a convenient reversal on gun control highlights her opportunism

Clinton's campaign recently hit Bernie on the one issue where she resides to his left: Guns. But she didn't always 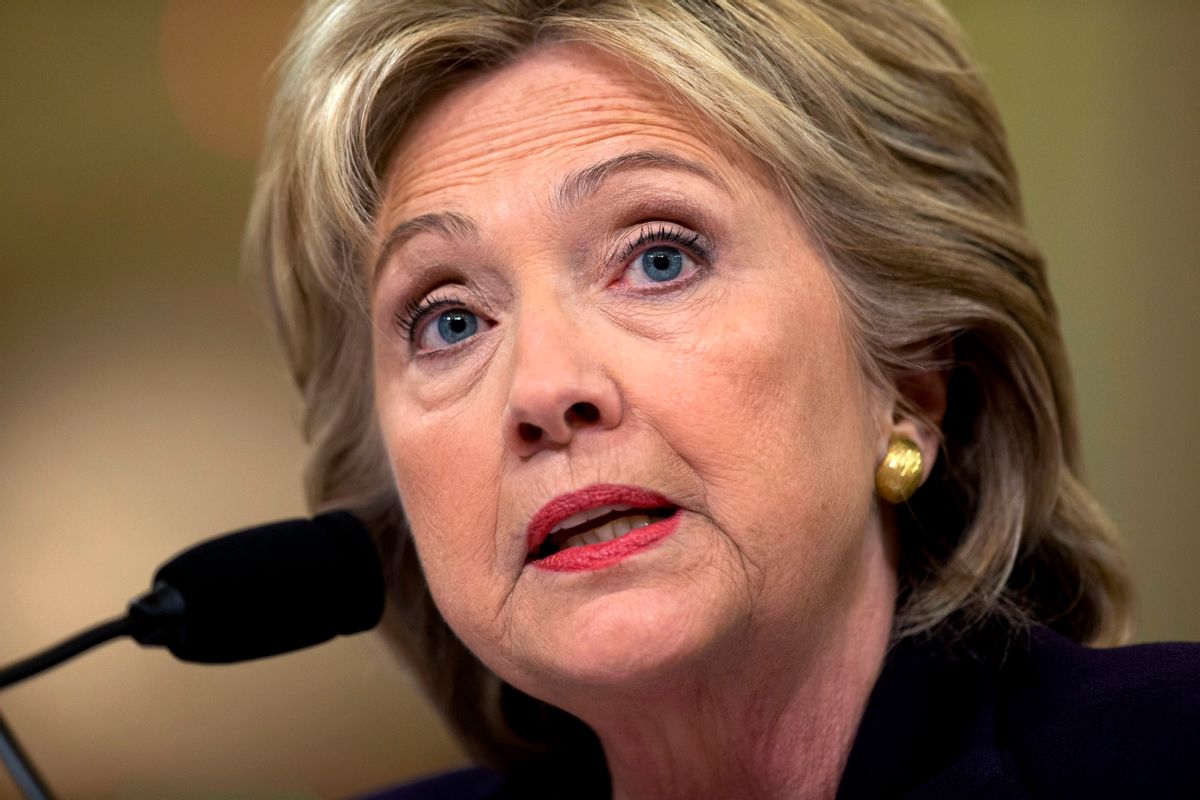 FILE - In this Oct. 22, 2015 file photo, former Secretary of State Clinton testifies on Capitol Hill in Washington. Lawyers for the State Department have asked a federal judge to limit the scope of testimony about Hillary Clintons use of a private email account as secretary of state. (AP Photo/) (AP/Carolyn Kaster, File)
--

For many Americans on the political left, it has been hard to take anything Hillary Clinton has said during the 2016 Democratic primaries at face value. With Senator Bernie Sanders running well to her left, the former Secretary of State has attempted to rebrand herself as a pragmatic progressive (“a progressive who likes to get things done”) who, by and large, agrees with the principles of Sanders, but would be much better at affecting real change in Washington.

On numerous issues, Clinton has flip-flopped to the left — or, if you choose to be non-cynical, she has “evolved.” And this evolution has been something to behold. (Of course, by using the term evolution, one must assume that she will not “devolve” on certain positions once elected.) Indeed, one cannot discuss the issues for very long without finding major changes in Clinton’s policy positions — some of which may be genuine, others that are undoubtedly motivated by political self-interest, and still others that may be both sincere and self-serving.

On gay marriage, for example, Clinton most likely supported it privately before 2013, even though she opposed it publicly. But only when it became sufficiently popular among the population did she suddenly become a leading advocate of marriage equality.

Other talking points that she has changed her tune on, like the Trans-Pacific-Partnership — which some have called “NAFTA on steroids” — seem to be entirely political. Before coming out in opposition to the deal, she had vocally supported it dozens of times, even calling it the “gold standard” of trade deals. Only after Bernie Sanders had made it an important issue in the race did Clinton alter her position. Progressives have taken note of many other matters that Clinton the campaigner has changed position on, from fracking to immigration reform to free trade in general. (Clinton was an ardent supporter of the 2011 trade deal with Panama, which has recently come under the spotlight after the Panama Papers leak.)

Even the one issue where Clinton is genuinely more progressive than Sanders is tarnished by her chameleon-like maneuvering. By now, everyone knows that Clinton is to Sanders’ left on gun control — which does not mean that Sanders is regressive, as the Clinton campaign has frequently tried to portray him. The Senator has a D-minus rating from the NRA, and supports most gun control measures — including a ban on assault weapons. Last week, this issue became a source of heated discussion after Sanders gave an interview with the New York Daily News.

In the interview, Sanders was asked whether victims of gun violence should be able to sue gun manufacturers for damages, as family members of the Sandy Hook massacre are currently trying to do. At first, Sanders simply replied no, but then expanded on his answer after appearing to realize that it would be twisted to paint him as an NRA-stooge by his opponent.

“If you're a gun dealer and you sell me a gun and I go out and I kill [someone],” said Sanders, “Do I think that that gun dealer should be sued for selling me a legal product that he misused? [Shakes head no.] But I do believe that gun manufacturers and gun dealers should be able to be sued when they should know that guns are going into the hands of wrong people. So if somebody walks in and says, 'I'd like 10,000 rounds of ammunition,' you know, well, you might be suspicious about that. So I think there are grounds for those suits, but not if you sell me a legal product.” Sanders went on to say that he supports a ban on assault weapons, and that the Sandy Hook lawsuits are “not baseless.”

Sure enough, the Clinton campaign quickly used the Sandy Hook tragedy against him, Tweeting that he “prioritized gun manufacturers' rights over the parents of the children killed at Sandy Hook.”

Clinton went even further a few months earlier, when she implied that Sanders’ view on gun control was inherently racist, after the Senator — who comes from a rural state with many gun owners — said that gun control laws in an urban setting like New York City may not be suitable for a rural area where hunting and farming are widespread.

“There are some who say that [gun violence] is an urban problem,” said Clinton, during a speech in Charleston, South Carolina, where the Charleston Church massacre had occured a few months earlier. “Sometimes what they mean by that is: it’s a black problem. But it’s not. It’s not black, it’s not urban. It’s a deep, profound challenge to who we are.”

For a campaign trying to paint its opponent as a heartless dog-whistling lackey for the NRA, you would expect its own candidate to have a pretty consistent background on the issue. But of course, we’re talking about Hillary Clinton. During her 2008 campaign, Clinton’s tune on guns was quite different, especially after her then opponent Barack Obama opined that some Americans “cling to guns or religion.” Clinton called his comments “elitist” and “out of touch,” and even bragged about learning how to shoot a gun as a child. She also made an argument that was very similar to the allegedly racist argument that Sanders made in 2015:

“What might work in New York City is certainly not going to work in Montana,” said Clinton. “So, for the federal government to be having any kind of, you know, blanket rules that they’re going to try to impose, I think doesn’t make sense.”

This kind of political opportunism — on an issue that Clinton seems to genuinely care about — is why her “evolution” on so many other topics is difficult for progressives to accept. Does this mean that none of her views can change with time, or that all of her opinions are politically motivated? Of course not. Beliefs change, especially when new evidence presents itself. But one has to be truly credulous not to be at least somewhat dubious about Clinton’s evolving views. Right now, she is adapting to the current political climate, and once the general election comes around, she will adapt again, and again, and again.