Where the boys are: Richard Linklater's "Everybody Wants Some!!" and what women's comedies can learn from the art of the bromance

I'm a feminist who loves dude comedies, because they explore a side of friendship women's films rarely get to show 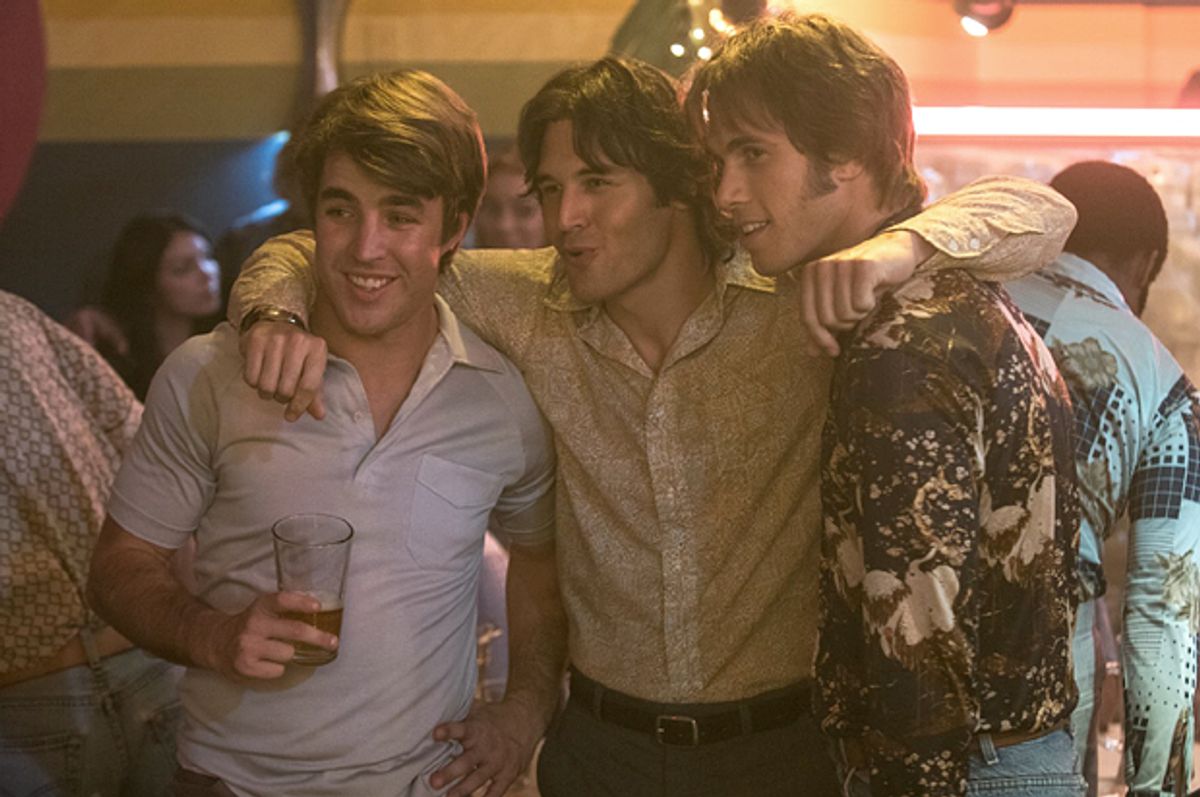 Temple Baker, Ryan Guzman and Blake Jenner in "Everybody Wants Some" (Paramount Pictures)
--

There’s a scene in Richard Linklater’s latest film, “Everybody Wants Some!!,” where Finnegan, a suave college baseball player, takes an earnest tone with two young women during a raucous party. Regrets are born out of what we don’t do, not what we’ve done, he explains. He cites time’s unavoidable wrinkle—aging—and urges the women to seize the moment. After exchanging coded eye contact with one another, they’ve been convinced.

We cut to mud wrestling, a sign of the times. The 1980s of “Everybody Wants Some!!” is the age of moustaches worn without irony, men’s shorts flunking the fingertip-test, Kerouac being read in paperback, and flesh not sexted but groped in hall closets: chasing women is as much sport as throwing a bloop curve. It’s a late 70’s frat-boy comedy scene, like those in “Animal House” that paved the way for the Farrelly Brothers’ and Judd Apatow’s brand of gross-out (b)romances. So mud wrestle the women do, first with one another and then with a game ball player, à la John Candy in “Stripes.”

Linklater has called the film “a spiritual sequel” to “Dazed and Confused,” and the film wears its humanist sympathies on its letterman jacket. This spirituality is why I was excited to see “EWS!!”; I craved the camaraderie Linklater famously fosters amongst his actors, a languid familiarity that radiates from the performances in everything from “Before Sunrise” to “School of Rock.”

Seduced by this easiness, I watched the mud wrestling. And I was unperturbed when a character joked about sex on waterbeds (like having sex on top of a fat girl), unfazed by a shot of a woman’s toothsome booty clad in black lace underwear (and then—the underwear gingerly removed). In fact, those politically-incorrect guys, with their bird-boned braggadocio, are what I loved about “EWS!!. I loved their hubris and naiveté, their “fuck-withery” and sincerity (as when four team members smoke apocalyptic quantities of marijuana and test their capacities for telepathy). I loved their friendship.

Or is it a bromance? (In Salon’s 2013 interview with Paul Rudd and David Gordon Green, Green suggests a pair of characters is necessary to the bromantic structure.) A bro-orgy? A bro-some? Just as much as I loved the film’s ambling non-plot, I loved shelving my feminist critique and joining the bro squad.

“EWSS!!” has been well-received (Metacritic cites a “Metascore” of 85, a Üser Rating of 8.4). It’s the story, mostly, of a quiet bro, Jake Bradford (Blake Jenner), a shaggy-haired freshman pitcher who arrives at Texas Southern University blasting “My Sharona.” At the off-campus sprawler that houses the baseball team, bro by bro Jake meets his team. The first-day of class is days (and hours) away, an on-screen countdown announces, suggesting these moments before summer ends and the semester begins are limited—and crucial.

From that point on, “EWS!!” keeps the fun fun, at least for the bros. “The girls can be just as slutty as the guys,” one character exclaims, gesturing toward a gender equality on which the movie doesn’t elaborate. Its concerns are bro-ly: Is the womanizing really so flagrant when, by the end of the weekend, Jake establishes a touching relationship with a performing arts major named Beverly (Zooey Deutch)? When, as A.O. Scott writes in his review of the film, “the guys … are as vain as any gossip girls, primping endlessly before heading out to a club and admiring the curve-hugging tightness of their own jeans?”

As a feminist—okay, maybe a bad feminist—I felt conflicted: casual sexism aside, was I supposed to looked past Jake’s earlier backseat-bang sesh with a curly-haired coed when he wooed the complicated Beverly? To forget that Linklater shows a sensitive bro gets to have his cake and eat it, too? In other words, is it possible for a feminist to enjoy a movie that celebrates, with fuzzy, nostalgia-lit fireworks, this bro-centric ideology?

The truth is, I’ve always been drawn to movies that show groups of men broing-down. When my mother took me to Blockbuster, I gravitated toward Bill Murray. I loved “Ghostbusters” and “City Slickers” and “Three Men and a Baby,” “Meatballs” and “Spaceballs” and anything with Chevy Chase, who I wanted to be my father and husband. I watched “Saturday Night Live” for Phil Hartman, Tim Meadows, Dana Carvey, Mike Meyers, David Spade. When I felt serious, I loved “Diner.” When I felt thuggish, “Reservoir Dogs.” But more than anything, I loved “Stripes,” which I discovered via Betamax and memorized by VHS.

There’s something comforting about the world of schlubby men. They carry pizzas that look better than any pizza in the history of real life; they date babes. And, no matter how pock-marked their cheeks or how Brillo-pad-ish their hair, they have friends. “Everybody Wants Some!!” may culminate in romance, but the friend movie’s appeal has never been about a single moment or shot—it’s about montages of debauchery (or fun), fun at which you, the viewer, can take a swing.

So why are there not more movies that let me participate in this fun from a female point-of-view? (Please don’t recommend “Thelma and Louise,” where I get to have all the fun in the world with a young Brad Pitt and then drive off a cliff.) Despite the success of films like “Bridesmaids,” there’s still a dearth of non-cliquey depictions of female friendship, which Seventeen’s listicle, “10 Best BFF Movies Ever!!” confirms. In “Mean Girls,” “Heathers,” and “Clueless,” subscription to a group’s prevailing codes smacks of conformity. Sheepishness. A problem to be overcome. In the bro squad, sameness is part of the fun.

So I worry. Does this preference for the bro squad make me, as Roxane Gay puts it in her eponymous 2014 essay, a "bad feminist?" In that essay—manifesto?—Gay proclaims, “I am just trying … trying to make some noise with my writing while also being myself: a woman who loves pink and likes to get freaky and sometimes dances her ass off to music she knows, she knows, is terrible for women.”

But maybe the onus is partially on filmmakers. In his Salon review of “The Boss,” Nico Lang writes, “The Boss’ is more fun to recap than it is to actually watch … like an old pair of mom jeans, the movie around [Melissa McCarthy] never does her any favors.” While I found Lang’s simile cringe-worthy, it points to a larger issue with female-driven comedies. “Bridesmaids” may capture the bond between besties Annie and Lillian (Kristen Wiig, Maya Rudolph), but in-fighting amongst 2.5-dimensional personality types like Pretty-Snobby Girl (Rose Byrne) and Audacious-Outsider (McCarthy) can’t erase the story’s conservative, connubial conclusion.

Until female friendships stop being portrayed as clique-mongering, wardrobe-swaps that, no matter how razor-sharp the dialogue (“Obvious Child”) nor how outré the gags (“Trainwreck”), exist within the confines of a girl-gets-guy plot structure, what is a feminist viewer hungry for depictions of unforced camaraderie to do?

In this feminist’s case, she’ll turn to Richard Linklater.

I don’t believe there’s anything inherently antifeminist about bromances and I don’t believe Linklater’s latest is terrible for women, but I’m conflicted. And maybe so is “EWS!!” Despite being littered with what Dr. Dustin R. Iler, who teaches at Washington University in St. Louis, calls “masculine narrative tropes,” like the on-screen countdown to the first day of class, “EWS!!” subverts the traditional plot-driven story. The ping-pong and baseball and knuckles and kegstands, even his frisson with Beverly leaves Jake beginning class with little cemented in his future but bro-ness. This kind of ambiguity, Iler notes, may represent, “some kind of marriage between a ‘feminine’ narrative and the content of a ‘masculine’ action movie [where] ‘your heroes have this much time to complete the mission.’” Friendship, too, is inconclusive and meandering, an epic of gags and rituals that accumulate significance not because of mission but repetition.

For films about female friendships to succeed, they need to take a cue from bromances, to go beyond the marriage plot and celebrate aspirations outside of coupling. Maybe that’s a sufficient narrative structure for a movie, as it is in “EWS!!.” Consider one of the great, unlikely bromances of the 2000s: “Lost In Translation.” In Sofia Coppola’s 2003 sulky May-December comedy, depressed Charlotte (Scarlett Johansson) finds herself alone in Tokyo where she meets equally-depressed, Bob Harris (Bill Murray). As actors must in any good bromance, Charlotte and Bob cavort and share intimacies, get drunk and act the fools. And, like Linklater’s latest, Coppola’s film ends inconclusively: What does Bob whisper to Charlotte before his avuncular kiss? Is that—something no audience can truly hear—real friendship? And, if so, why does Coppola’s movie need Murray, granddaddy of bros, to succeed in capturing this mystique of kith? What, pray tell, would have happened if Charlotte had befriended an older gal?

A better bromance for women, then, might “Romy and Michele’s High School Reunion,” where the friends’ entrepreneurial prowess, even at first fictional (Post-Its), constitutes as success more than the attainment of any man. There’s also the terrific 1999 satire, “Dick.” Like “EWS!!,” “Dick” depicts an era-past; it stars Michelle Williams and Kirsten Dunst as two teenagers who find themselves embroiled in the Watergate scandal (and crushing on Richard Nixon). In his review of the film, Roger Ebert wrote, “the girls … blunder onto one incriminating secret after another. Their motivation seems to stem from ordinary teenage attributes, such as curiosity, idealism and romance.” Along the way, little comes between the girls. Their story is in those “ordinary” attributes. And it's when Linklater lets those very “ordinary” moments tick by that the brosquad in “Everybody Wants Some!!” is at its most winning.