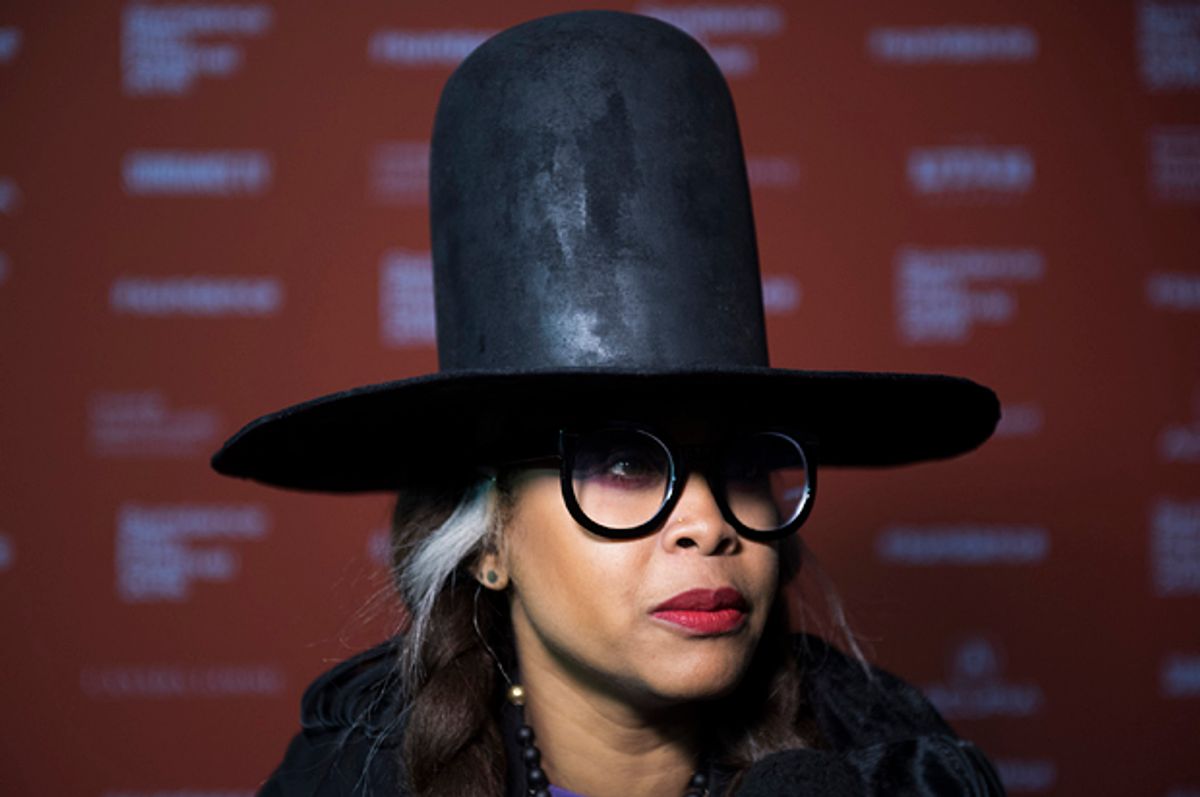 Yesterday, in response to a Newshub article, picked up by The Guardian, about a New Zealand school where a dress code was instituted requiring girls to lower their skirt lengths to their knees so that, according to the deputy principal, they can “keep our girls safe, stop boys from getting ideas and create a good work environment for male staff,” singer Erykah Badu issued a Tweet storm. Her main point seems to be that since it’s, in her words, “natural” for men to be attracted to girls in short skirts, they should cater to that fact by dressing appropriately. Here’s a sampling of what she had to say:

Badu repeatedly used the word “biology” to assert that men will always look at sexually attractive girls and women, so it’s up to them to counteract those natural attractions.

While Badu has since entertained a stream of opinions about the topic on her Twitter account, many of which have disagreed with her, there’s no way around the fact that she’s saying that girls are responsible for how grown men look at and behave towards them. When she says “we must all be aware and responsible,” she’s giving them equal weight even though one is in a position of power over the other, and putting that responsibility onto the shoulders of children and thereby removing some of it from those who are employed to teach them.

As a student at the school, Sade Tuttle, told Newshub, “The rules themselves aren’t the problem; the problem is when these codes target girls specifically because their bodies are sexual and distracting.” Exactly. These girls are getting the direct message that their thighs are so tempting they may cause the school to be less “safe” unless they’re covered up.

School dress codes are not a new topic, nor are the ways they so often demonize female students for showing too much skin or simply being too suggestive, whether we’re talking about exposed shoulders or yoga pants. Whatever the supposed reason for telling girls how to dress, codes like this reinforce a sexual double standard that’s as problematic for boys as well as girls. As Suzannah Weiss wrote at Bustle about how these dress codes can reinforce rape culture, “By policing how girls dress in attempt to divert boys' attention from them, schools are holding girls responsible for how boys view them and even how they do in school. When schools talk about how ‘distracting’ girls' outfits are, they're absolving boys of responsibility for doing their duties as a student regardless of their surroundings.”

The message Badu and the school are sending is that these girls need to protect their teachers, rather than the other way around. Extended to its logical conclusion, this way of thinking tells them that the onus of ensuring their safety falls on them, based on how they dress. Badu is implying that the job of not causing unwanted sexual attention falls on girls and women, rather than men (or people of any gender) who might harass them. Girls who are told that their skirt length or any other way of dressing will protect them are being handed a flawed value system.

This mindset can have a direct effect on how women think about and handle sexual assault. Look at Jenni Murray, who wrote about her 1969 rape at 19 years old, for the Daily Mail in 2010, in which she revealed, “It didn't occur to me to report what had happened to the police because I didn't think anyone would believe me and I would have been too embarrassed to reveal what a vulnerable position I'd placed myself in. After all, hadn't I worn a short skirt, been drinking and willingly gone back to his house?”

It’s also insulting to the male teachers, categorizing them as slobbering Neanderthals who will lose every ounce of sense and self-control if they were to see too much of their students’ legs. James Nokise of New Zealand’s Sexual Abuse Prevention Network (SAPN) told TV channel TVNZ, “It's unfortunate that male staff and students of this high school find themselves in the position where they're being told that they aren't evolved enough to be able to concentrate because of the knees of young high school woman.”

It’s hard to differentiate Badu’s sense of personal responsibility with extreme conservatives’ views that women and girls are the guardians of male sexuality. My favorite example can be found in Hayley DiMarco’s book “Sexy Girls: How Hot is Too Hot?” DiMarco writes, “…if you walk down the street and see a bench lined with 70-year-old men, they are looking at your breasts and smacking their lips. You are every bit as sexy to the old guy as you are to your target guy. And you think that’s gross? Just think about the poor pastor who has to stand in front of his congregation all morning and talk about God while trying to avoid seeing your breasts popping out from your baby doll top. A guy is a guy is a guy, and so if what you’re showing ain’t on the menu, keep it covered up.”

DiMarco’s “a guy is a guy is a guy” sounds close enough to be indistinguishable from Badu’s insistence that men are “automatically” attracted to women of child bearing age. What both have done is tell girls they need to somehow control this natural male lust. If they don’t, well, can men really be held responsible for what they do?

Kirsten West Savali pinpointed the problem with the emphasis on skirt length and safety, writing at The Root: “It is unethical and illegal for adults in positions of authority to act on sexual urges they may have for children entrusted to their care. That is rape. Period. Therefore, the focus should be on identifying, then firing, teachers with a proclivity for young girls, not pulling out the measuring stick for their skirts in the interest of so-called fairness.”

In subsequent Tweets, Badu has insisted that she’s not “victim blaming,” but merely being “realistic.” But that supposed realism seems rooted in a belief that men are natural predators and girls who aren’t wearing the right kind of clothing have given their teachers free reign to act inappropriately.

The other problem is the assumption that knee-length skirts will somehow counteract a culture that tells men it’s okay to heckle, harass and prey on women, whatever they’re wearing (remember the woman who was sexually harassed while sporting a parka and boots?). Making the focal point of student safety about skirt length rather than education about consent and bodily autonomy is simply the wrong way to address the broader issue of harassment and assault.

Let’s not forget that we are talking about an official school policy, one whose message is going to be absorbed by students at an important time in their development. If these girls are being told that what they’ve been wearing is so distracting, how is that going to affect their education? As writer Lelita Cannon put it on Facebook, “Girls shouldn't have to lower their skirts so they reach knee-length. Teachers need to raise their eyes and conduct themselves as the honorable adults they are entrusted to be.”