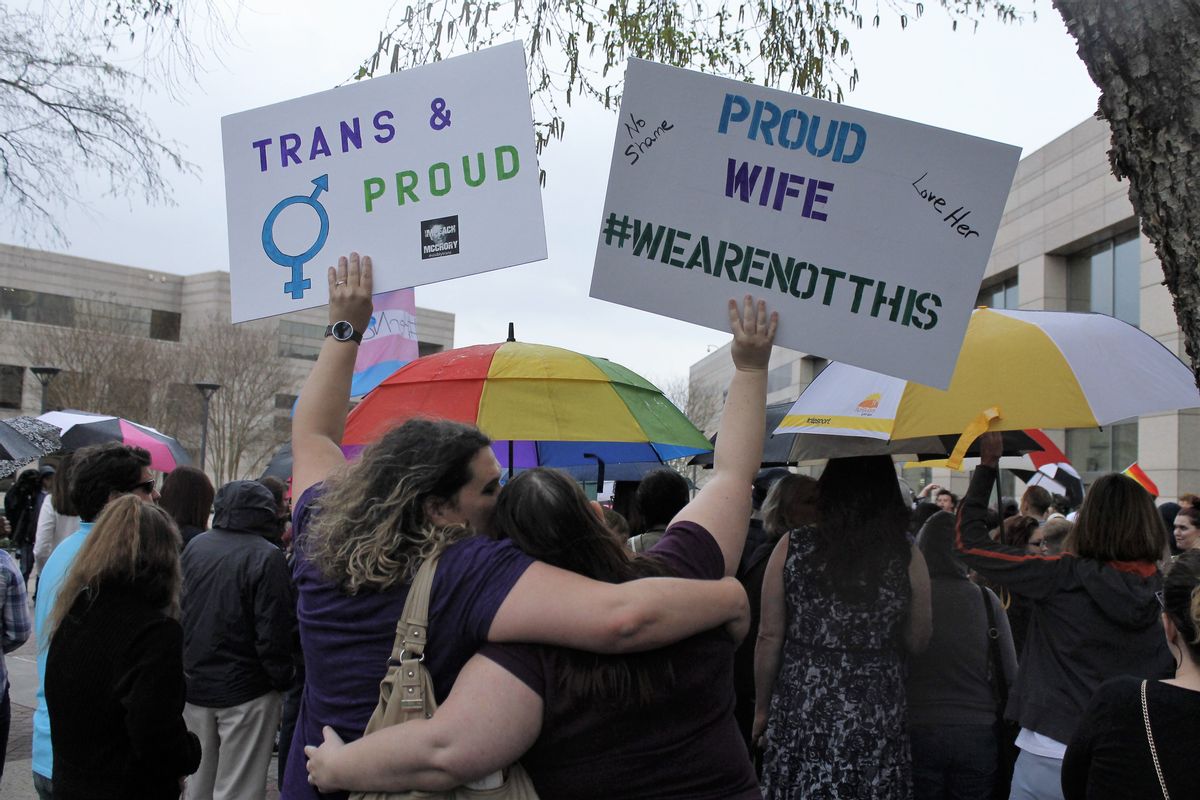 Two protesters hold up signs against passage of legislation in North Carolina, which limits the bathroom options for transgender people, during a rally in Charlotte, N.C., Thursday, March 31, 2016. The rally drew around 100 people at the Charlotte-Mecklenburg Government Center. (AP Photos/Skip Foreman) (AP)
--

Boycotts work. As much as conservatives love to exalt the free market and deride social justice activists, when the one uses the other to make a political statement, it is most often conservatives left on the losing side.

Just ask Republican Indiana Governor Mike Pence who was forced to roll back his regressive "religious freedom" bill, allowing businesses the right to discriminate against LGBT customers, after a viral national campaign to boycott the state left him no choice back in 2015. Or Georgia Republican Governor Nathan Deal who saw the impending onslaught when major multi-national corporations like Delta Airlines, Coca-Cola and the National Football League all threatened divestment from the state when its legislature passed its own version of the discriminatory anti-LGBT legislation modeled after the federal so-called religious freedom act. Now, Republican North Carolina Pat McCory is receiving that very same lesson, albeit perhaps too late to undo the damage to the state.

On Tuesday, Germany's largest bank, Deutsche Bank, announced it was halting plans to add 250 new jobs in North Carolina, citing the Republican-sponsored new law prohibiting transgender people from using bathrooms that differ from the genders on their birth certificates.

North Carolina's governor signed the legislation into law last month and the public backlash to it ever since has been brutal and unrelenting. PayPal announced last week it would scrap a new facility in Charlotte due to the law. Bruce Springsteen cancelled a stop in the state on his tour last Sunday, writing a poignant rebuke of the discriminatory law to explain his decision.

By Tuesday afternoon, McCrory was already backpedaling, announcing in a taped message that the discriminatory statewide ban on transgender people using the bathroom facilities of their choice was simply a necessary government response to another instance of government overreach.

"I have come to the conclusion that there is a great deal of misinformation, misinterpretation, confusion, a lot of passion and frankly, selective outrage and hypocrisy, especially against the great state of North Carolina," a chipper McCrory said in the video, before explaining that the transgender bathroom ban remains in place for all of North Carolina's students in public schools, but that private businesses are free to discriminate or not as they please: