Can scandal-plagued David Petraeus save the Republican Party? Of course, argues David Ignatius — he's a general! 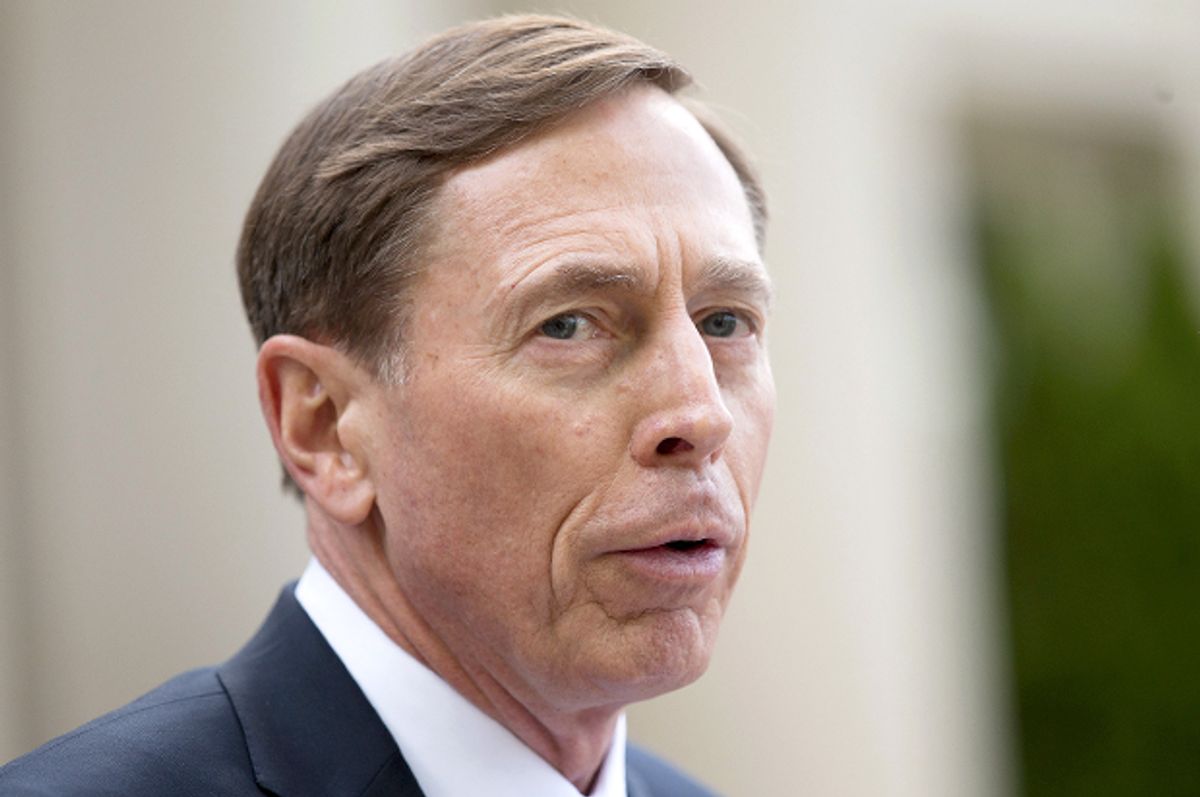 A significant portion of the analysis devoted to the Republican presidential race is focused on helping the GOP figure a way out of the amazing mess it’s created. The party is on the verge of nominating either an unlikeable ideologue or a racist cartoon villain, and so pundits are busily stretching the bounds of political logic to dream up the deus ex machina that tidily bring order to all the chaos and leave everyone satisfied. Maybe Mitt Romney will rise up for a third time and finally convince America that it’s ready for a stilted business consultant president. Perhaps a conservative third-party challenger will miraculously appear on ballots across the country. There are no end to the possibilities, and they’ll keep on coming so long as the Republican self-immolation continues.

The Washington Post’s David Ignatius came up with yet another solution for Republicans this week: kick both Donald Trump and Ted Cruz to the curb and nominate a military leader instead:

How can the GOP escape this demolition derby? Some have proposed a unity bid by House Speaker Paul Ryan (Wis.), or the redux of former Massachusetts governor Mitt Romney. But these politicians would look like opportunists — stealing the nomination from the two candidates who won most of the primaries and caucuses — and the result might be even more divisive for the GOP.

Enter the candidates on horseback: It may sound like a crazy idea, but this country is hungry for the leadership the U.S. military, at its best, embodies.

I suppose the idea is that a military leader will swoop in, depose the eccentric authoritarian who has taken over, and be greeted as a liberator by the activists and consultants who are yearning to breathe free.

You’re probably wondering how it is that Mitt Romney and Paul Ryan, who are both Republican politicians of long standing and considerable notoriety, would be dismissed as “opportunists” while a heretofore politically inactive military leader riding in “on horseback” would somehow dodge the “opportunist” taint. The answer, per Ignatius’ reasoning, is that they’re from the military, and “military” equals “good.” A military leader would be so manifestly good for politics that Ignatius just takes it as a given that the American people are clamoring for a veteran to lead them. Never mind that the last two veterans who won their parties’ nominations and ran strongly on their military records (John McCain and John Kerry) were both rejected by voters. And please do dismiss the fact that the people with military records who ran this cycle (Rick Perry, Jim Webb, and Lindsey Graham) were among the least popular of the candidates. And let’s not forget that the current Republican frontrunner openly mocked the military service of the party’s 2008 nominee to no discernible ill effect – he’s actually exceedingly popular with service members and their families.

But Ignatius is so certain that voters would rise to a general’s banner that his list of would-be warrior presidents includes David Petraeus. The retired general was the focus of intense presidential speculation for years until he was busted for leaking classified information to his biographer/mistress. In any other cycle, the double-whammy of an extramarital affair and the criminal mishandling of state secrets would make him a fatally compromised candidate. But these failings make him an especially bad candidate for this particular cycle, given that marital infidelity and the bungled treatment of classified information are the cornerstones of the case the Republicans plan to make against Hillary Clinton. But Ignatius is an optimist – he calls Petraeus’ criminal behavior and multiple breaches of trust a “stumble.”

The other military men on Ignatius’ list don’t make much more sense as political candidates. His first suggestion is Marine Gen. James Mattis, who is the focus of a crazy, billionaire-backed recruiting effort aimed at throwing the general election into chaos and engineering a situation in which the House of Representatives picks Mattis as the next president. Ignatius also puts forward Adm. Mike Mullen, who “led the military into a new era of tolerance toward gay men and lesbians,” a laudable accomplishment that the 2012 Republican Party platform attacked as “social experimentation” that “undermine[s] military priorities and mission readiness.”

Ideological inconsistencies and massive scandals aside, Ignatius argues that “maybe it is time for Republicans to consider a nominee who might actually be able to lead the country out of the wilderness.” The unsupported assumption here is that military leaders are naturally capable politicians, and that the trick to curing the massive dysfunction plaguing Republican politics is to sic a general on it. We cannot and should not assume that the military is manifestly capable of fixing our problems – our political problems especially.