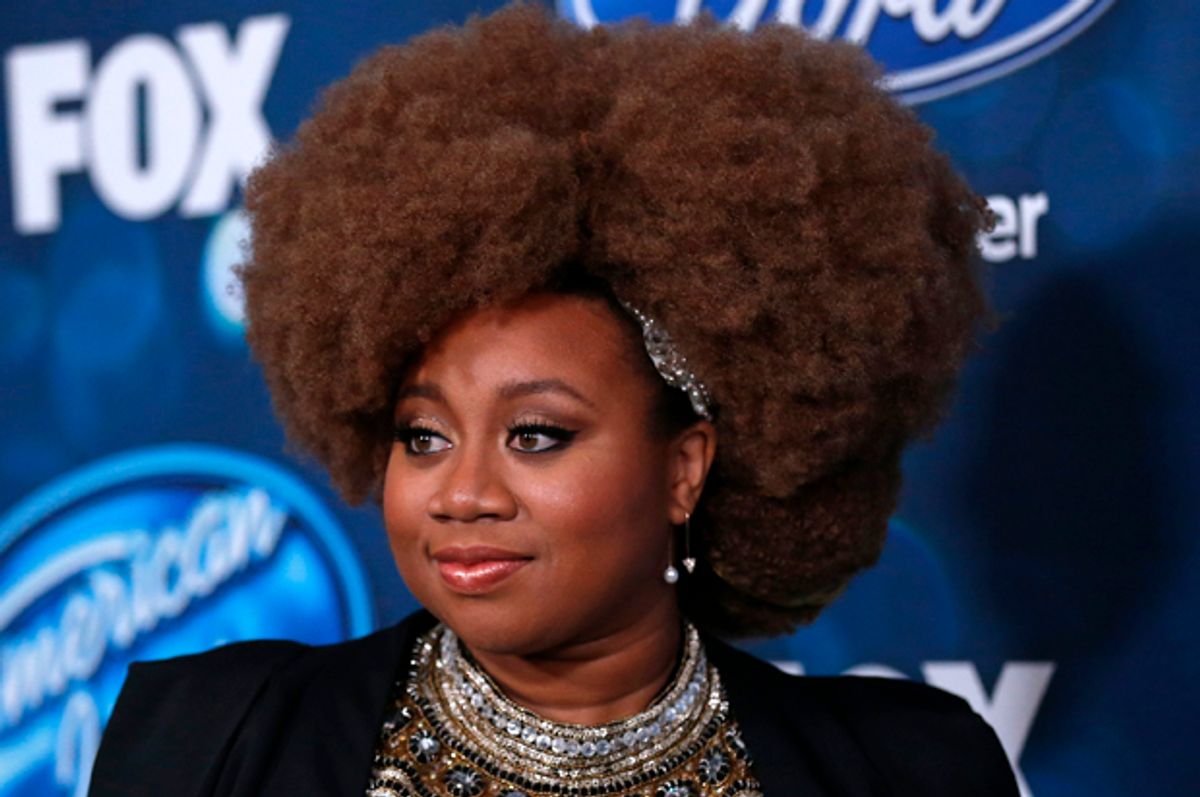 “American Idol” finalist La’Porsha Renae caused a firestorm of controversy this week following comments she made about Mississippi’s recently passed “religious liberty” law. Renae, who finished second in this year’s contest behind Trent Harmon, condemned HB 1523, which many believe is the harshest anti-LGBT law yet. “This is how I feel about the LGBT community: They are people just like us,” she said on a conference call with reporters. “They’re not animals... They’re people with feelings. Although all of us may not agree with that particular lifestyle for religious reasons, whatever the reason is, you still treat each other with respect.”

Renee’s comments drew ire, however, when she affirmed that like many Mississippi lawmakers, she “[doesn’t] really agree with that lifestyle.” She continued, “I wasn’t brought up that way. It wasn’t how I was raised. But I do have a lot of friends and a lot of people that I love dearly who are gay and homosexual and they’re such sweet, nice people. We should be able to coexist with one another.” Twitter users from Shane Bitney Cone to Sister Crayon took her to task for the comments, referring to her views as “disappointing.”

It’s understandable why so many in the LGBT community were outraged by her statements: Equating same-sex relationships to a “lifestyle,” like driving a Toyota Prius or going to brunch, has long been used to justify discrimination against queer people. It dismisses sexuality as akin to a fad and LGBT people as not worthy of protections or equal rights. After all, does your Prius need non-discrimination legislation? But dogpiling on her unfortunate gaffe misses a salient point: A lack of education about the lived experiences of LGBT people shouldn’t justify discrimination against an entire population, as has recently been the case in states like Mississippi. Renae’s own ignorance isn’t the problem; it’s just the tip of the iceberg.

What is an LGBT lifestyle, anyway? Simply put, it’s everything you can think of. Queer people lead incredibly rich, varied lives that often have very little in common with each other. They are transgender, people of color, bisexuals, Jewish, two-spirit, vegetarians, and sometimes even Republicans. Some are raising families with their partners. Others are going to the grocery store in booty shorts and heels. Maybe they’re doing both—or just trying to survive. As CNN’s LZ Granderson argues, “being gay doesn't dictate how people live their lives any more than being straight does.” Thus, it’s impossible and dangerous to generalize about the habits and preferences of an entire community, any more than you would any other population.

Because of the wide diversity of LGBT people, what queer folks hear when those outside the community claim that they aren’t down with the “gay lifestyle” is that they aren’t really on board with our lives. “What you are actually saying is that you can’t support me getting up early to make breakfast for [my] kids and pack healthy lunches,” Patheos’ Kimberly Knight writes. “You can’t support me helping a tearful kid through a crappy math assignment or a teenager through a heart-wrenching bout of boyfriend woes. You can’t support me going to work and loving the job I get to do with colleagues I respect.”

Challenging the ignorant beliefs of individuals is an important thing to do, especially when these views so often drive anti-gay legislation. The problem is that in a state like Mississippi—the state from which Renae hails—changing the hearts and minds of an entire population may be an incredibly difficult task. A 2015 Gallup poll found that the Magnolia State is the reddest in the nation, with 48.9 percent of respondents claiming to be conservatives. According to the Williams Institute, the state ranks as one of the lowest in support for same-sex marriage, although the bigotry LGBT people face remains high. A 2016 report found that 81 percent of Mississippians thought queer people faced significant discrimination in the state.

Much of that bias is written into the laws themselves. In Mississippi, schools are forced to teach students that being gay is a crime in their sex ed curriculum. Texas’ policy on the subject is nearly identical. The Lone Star State compels educators to “state that homosexual conduct is not an acceptable lifestyle and is a criminal offense under Section 21.06, Penal Code.” These proclamations against the “homosexual lifestyle” are based on outdated anti-sodomy laws effectively struck down by Lawrence v. Texas, the 2003 Supreme Court decision that decriminalized same-sex intercourse in all 50 states.

LGBT advocates, no matter how hard we fight, will never be able to make everyone recognize our humanity. There will always be those who use their religion or upbringing to rationalize their lack of support for our “choices.” But what we can do is ensure that bigotry doesn’t continue to be written into our laws and work to fight policies like these. According to the Human Rights Campaign, more than 100 anti-LGBT laws are currently in consideration across the country, many of which use similar rhetoric to justify hate.

Mississippi’s bill is a key example of that push. Also known as the “Protecting Freedom of Conscience from Government Discrimination Act,” the legislation allows for broad-based discrimination against the state’s LGBT population. If you’re dining out in Jackson, Mississippi with your partner, the proprietor can legally ask you to leave. Should you apply for a job and the hiring manager have objections to your gender identity or sexual orientation, HB 1523 says it’s OK if he tears up your application. If you’re a transgender person who has a heart attack and needs to be rushed to the hospital, the ambulance driver could decline to take you, citing their “sincerely held religious beliefs.”

The use of the word “belief” here is key. The issue in Mississippi isn’t just that many of its residents still hold prejudicial opinions of those unlike them but that the state’s government—including its Republican governor, Phil Bryant—believes that those personal worldviews trump basic civil liberties. What LGBT people in the Magnolia State need isn’t just greater acceptance but codified tolerance—the legal right to live their lives without being affected by others’ bigotry. Ignorance will always exist in the world, whether it’s Republican lawmakers or an “American Idol” runner-up. What really matters is what we do about it.

In a way, La’Porsha Renae is right. It will take decades to create the culture change that Mississippi so desperately needs. This includes both greater education and visibility, as those opposed to LGBT equality across the country meet queer people and find out that everything they thought they knew about the so-called “gay lifestyle” was wrong. But in the meantime, what we all need is to learn a little respect.