Torture is immoral and will be illegal for the foreseeable future, but Donald Trump and the GOP won't give it up 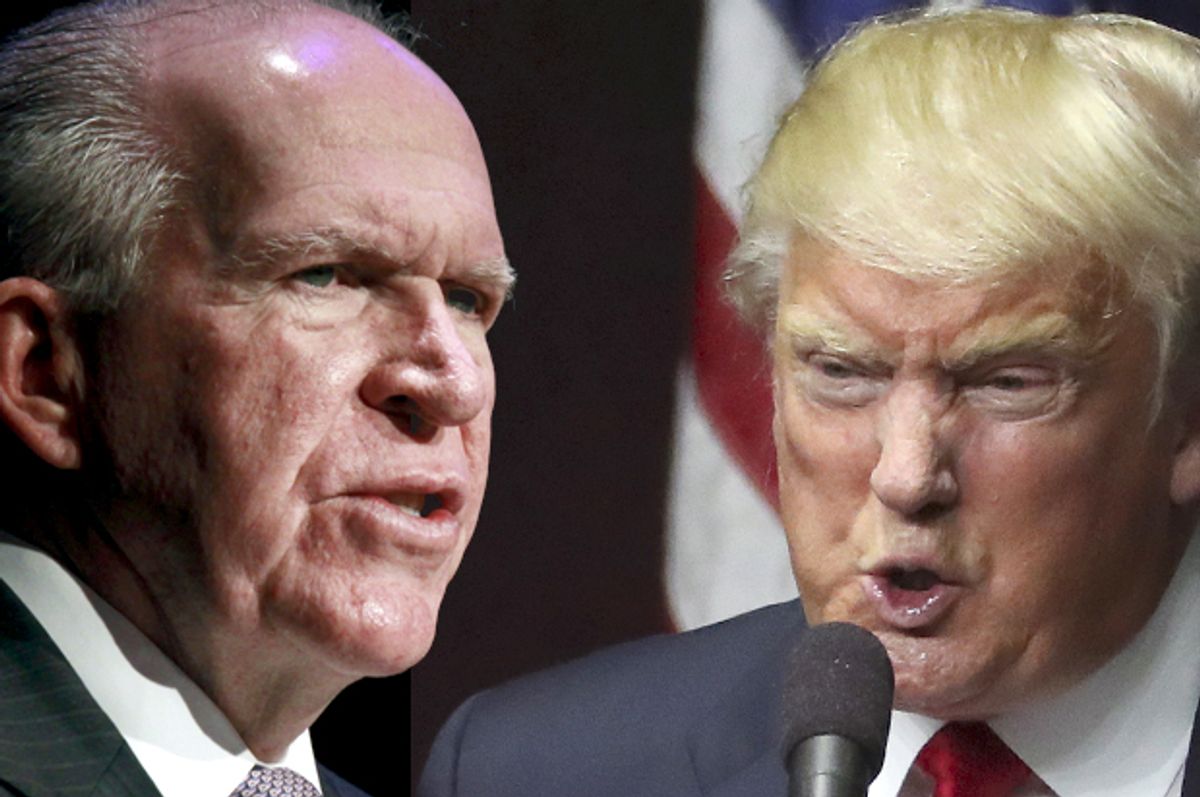 CIA Director John Brennan this week told NBC News that the agency under his watch would never waterboard anyone, even if ordered to do so by the next president. The issue of torture has been bubbling up periodically throughout the 2016 presidential election as pretty much every Republican candidate has lined up in support of the use of “enhanced interrogation techniques.” Brennan’s comments were made in the context of Republican frontrunner Donald Trump declaring that he’d bring back waterboarding and “much worse” techniques, because “torture works.” For Brennan, though, the integrity of the CIA must come first: “I will not agree to carry out some of these tactics and techniques I've heard bandied about because this institution needs to endure.”

It’s good that Trump and the rest of the GOP are meeting resistance from intelligence officials when it comes to torture, and it’s obviously a positive that the director of the CIA is willing to state on record that his agency is out of the torturing business. But let’s not let Brennan get away with suggesting that he’s driven entirely by moral calculation on this. Brennan’s position on the CIA’s Bush-era interrogation program has always been carefully hedged – he insists that valuable information was extracted from the program, but says that it’s impossible to know whether the use of “enhanced” techniques produced that information. In late 2014, after the release of the Senate Intelligence Committee’s scathing report on the brutality and ineffectiveness of the enhanced interrogation program, Brennan even indicated that CIA torture may resume at some point in the future if there is another 9/11-like terrorist attack. “We are not contemplating at all getting back into the detention program, using any of those EITS,” he said at the time, “so I defer to the policymakers in future times when there is going to be the need to ensure that this country stays safe if we face a similar kind of crisis.”

Since Brennan made that 2014 remark, however, Congress has made it more difficult for future policymakers to reinstitute torture as an official policy of the United States government. The National Defense Authorization Act for Fiscal Year 2016, signed into law last November, carried an amendment stating that persons in the custody of the U.S. government “shall not be subjected to any interrogation technique or approach, or any treatment related to interrogation, that is not authorized by and listed in the Army Field Manual.” (The Army Field Manual specifically prohibits waterboarding and a number of other interrogation techniques.)

Up to that point, interrogation practices had been set by President Barack Obama’s executive order limiting approved techniques to what the Field Manual prescribed, and the worry was that a future president could simply reverse Obama’s order and resume “enhanced interrogations.” But now the ban has the force of statute which would require congressional majorities to undo. There are still a couple of ways to get around this, as Rupert Stone noted a few months ago. “Extraordinary rendition,” whereby the government transfers a detainee to a foreign government for interrogation, is not banned by law, and it’s possible that a future Republican president could simply direct their Justice Department to not enforce the ban on torture. As it stands, though, waterboarding and “enhanced interrogation” are very much illegal and will continue to be when the next administration comes into power. So really, all Brennan said this week is that he won't break the law.

And that makes it all the more absurd that we’re having this debate, and that the director of the CIA has to make clear that the Republican most likely to win the presidential nomination can’t force him to start torturing people. There’s an easy moral case against torture and a strong practical one as well: torture does not work, it produces unreliable information, and it corrupts law enforcement agencies by alienating personnel who are bothered by their consciences. But the Republican presidential candidates have been almost uniformly pro-torture, and their arguments in support of the practice are absurd, ranging from pure sadism (“If it doesn't work, they deserve it anyway,” explained Donald Trump) to the nonsensical insistence that a failure to torture represents “political correctness.” They’ve spent the election cycle either promising to revive the illegal interrogation techniques or leaving the door open to their future resurrection, even though doing so would require overcoming a hostile Congress and/or outright defiance of the law.

Being in favor of these illegal and immoral practices is close to a mainstream Republican view. And the fact that government-sanctioned torture is often treated as a hotly contested campaign issue and not an enduring national shame is one of the lasting stains of George W. Bush’s tenure in office.