The next frontier in Cuba: American press is seeping into the country, shaking up nation's decades-long battle with free expression 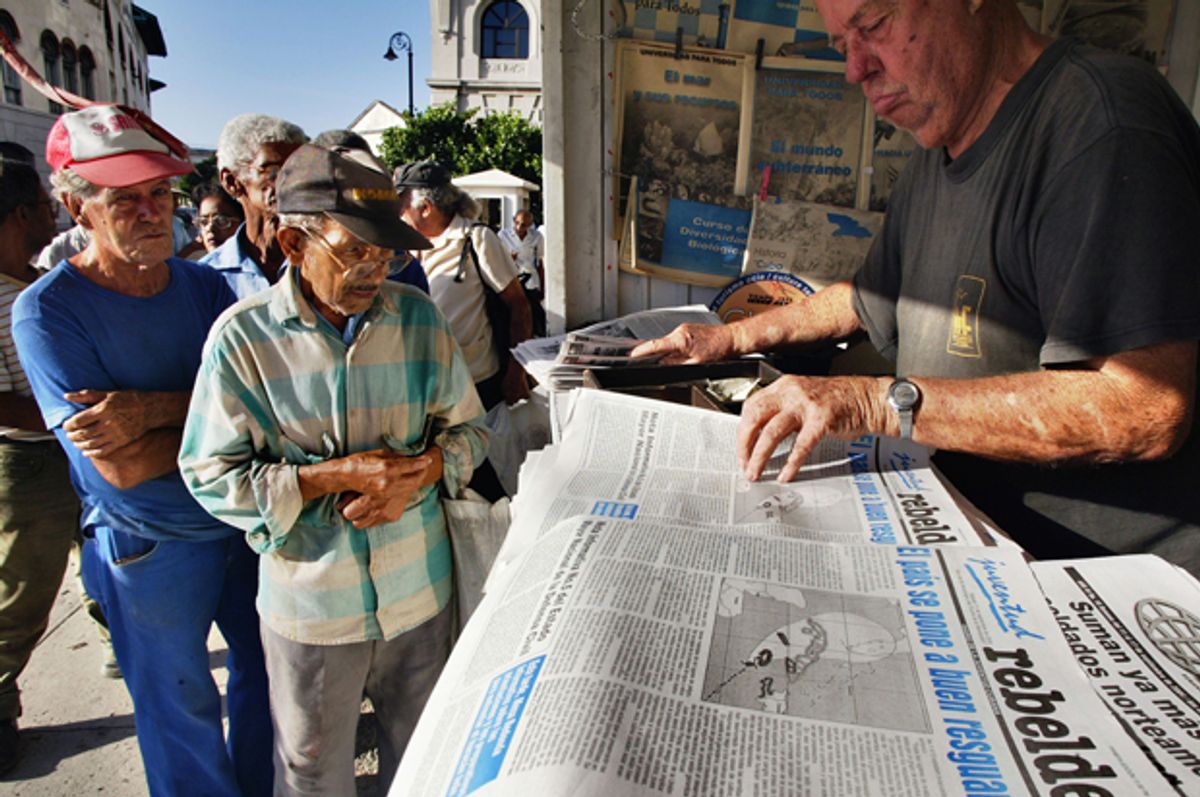 Facebook
Twitter
Reddit
Email
view in app
For Obama's historic visit to Cuba, the flags of the two countries hung together from balconies in Old Havana. The symbol was of unification and peace, a headway that U.S products would soon share a space in Cuban culture.

Netflix and Airbnb settled on the island last May. And as the last of the embargo thaws, it won't be long before foreign media moves in; infiltrating a country which for 80 years has existed without freedom of expression. But following decades of censorship and mistrust towards its press, could Cubans really believe in an independent media? And more importantly, when the Castros eventually fall from power, would Cubans turn to newly established foreign press to tell their story?

“Right now almost everybody seems to be obsessed with a few topics: entrepreneurs, reforms, political succession in 2018, Cuba and U.S. relations, Internet access. And that's it,” says Elaine Diaz, the editor in chief of Periodismo de Barrio, an independent digital magazine. “If more media comes to Cuba, they will have to compete for audiences, and inevitably be more creative. The agenda will not be dictated by the rhythm of U.S. regulations but by the dynamics of the Cuban society, what is important to us — as Cuban citizens — not what is important for the U.S. government.”

Journalists say the urgency in which the government addresses the restrictive framework that bans independent journalism in Cuba will greatly affect the future of the country. They could either embrace an independent press that reflects its people, or they could continue to fight against freedom of speech, giving power to foreign media and opening a door for more inaccurate reporting.

“You have to recognize that the lens in which they’re looking. Sometimes that lens may distort or misrepresent the reality in Cuba. To me the biggest danger is 'parachute journalism' trying to get a sexy story but missing the nuances,” said Ted Henken, professor at CUNY and co-author of “Entrepreneurial Cuba: The Changing Policy Landscape.”

Julie Schwietert Collazo, a freelance American writer covering Cuba for over a decade, referred to a recent piece by The New York Times titled “Along with President Obama, the 21st Century Visited Cuba," in which the generational differences between the countries' presidents and their citizens are explored.

“There are so many clichés and tired, inaccurate tropes that get trotted out over and over again: 'the time capsule.' 'The crumbling capital.' The image of the closed door of Cuba opening (Cuba's been open to the rest of the world forever).The 21st century didn't visit Cuba-- Cuba is IN the 21st century,” she wrote to Salon.

Collazo states the main concern for those that have been following Cuban developments is the perpetuated stereotypes used by the media, leaving Americans a completely decontextualized view of the country.

In 1961, Fidel Castro famously said that the interests of the Revolution were “above the newspapers.” Since then a liberal public sphere has not existed in Cuba, casting journalists as “employees of the state,” confounded by the role that they must play.

The state-run media does not report negative news — at least not negative news that's occurring in Cuba. Although the country claims to have made some progress since resuming diplomatic relations with the U.S., the few independent journalists trying to report in the country are still subject to harassment and detention. Anyone who defies the regime is an enemy of the state. The Committee to Protect Journalists ranks Cuba as the 10th most censored country in the world.

“The national newspaper in Cuba is the production of the Central Committee of the Communist Party. It says so on the front page of every paper. You are dealing with a media environment that is monopolistic and the private property of the communist party,” said Henken. “There's other countries in the world that have that phenomena but in Cuba it's in the constitution.”

In 2014, Juliet Michelena Díaz, a contributor to a network of local citizen journalists, was imprisoned for seven months on anti-state charges after photographing an incident between residents and police in Havana. She was later declared innocent and freed. She is one of hundreds of brave reporters in danger for practicing ethical journalism.

Currently, there are four different types of media in Cuba: the dissident, the independent media on the island, the official state media and the foreign bureaus. With talk of the Castro rule to end by 2018, a Cuba after communism seems ever more likely and it’s press at a critical time before reform.

But in the case of a liberalization of Cuban press, professionals in the industry say the result may be two-fold: western bureaus could play a vital role in keeping the country’s information afloat, while Cuban journalists flock to them for better pay; or Cuban journalists will establish liberal outlets but have to compete with foreign bureaus for readers.

“This is already happening but given the difficulty of these publications or media outlets directly hiring Cuban journalists, it's kind of taking place informally now under the radar. However, it will grow” says Henken.

In 1997, CNN became the first U.S-based news organization to establish a bureau in Cuba after the Revolution. Since then, the Associated Press, along with CNN and Reuters have also placed permanent staffers there. But western publications have had limited access reporting from the country because of strict regulations and inability to get visas. (Under the embargo, these publications also needed U.S. permission to open).

President Obama’s visit to Cuba resulted in over 100 additional foreign media outlets stationed in Havana, says Henken who was a special adviser on the trip. The historic visit came six months after the U.S said it would open a free trade agreement with Cuba.

Michael Weissenstein, the AP's Havana bureau chief, says that the easing of relations between Cuba and the U.S has made it more attractive for western publications to station there and a few have already applied. “Part of that surge of interest has been that since Dec. 17, many more foreign journalists [are] coming here and it’s been made much easier by the Cuban government to get visas,” says Weissenstein.

With plenty more western correspondents beginning to fly to Cuba, the "sexiest" stories will beat out the competition. However the danger will be the unprecedented attention they bring to local issues and cover-ups, previously concealed from public view. Resonating powerful emotions for the Cuban people who for decades were misinformed.

"For some journalists, Cuba will be hot news for a couple of years and they will leave the country after that “trending” effect," says Diaz. "For others, Cuba is a fascinating country and they want to see long-term changes and processes. In any case, good journalists  — no matter if they are Cuban or American — will prevail."

But critics of the government say that even big names in journalism have had to play ball with the regime up till now, undermining the very standards they uphold. “You may have to practice self-censorship to a certain degree. You might run stories that may be pleasing to the government and kill stories that are more critical because you don’t want to get your journalist kicked out and bureau shut down,” wrote Henken to Salon.

In 2007 the Cuban blogosphere emerged, providing reportage not affiliated or tarnished by state bureaucracy. However, internet in Cuba is limited and expensive, roughly 25% of Cubans have access, according to the country's National Statistics Office. Public WiFi spots cost $2 an hour — about a tenth of the average monthly salary, so most get their news in print. Web content is selective: anti-government blogs like Yoani Sanchez's "14ymedios" are blocked, yet Facebook and Twitter are accessible. YouTube is not.

During Obama’s visit, the U.S media boosted his role for changing the way Cuba considers censorship. But “14ymedios” writer Miriam Celaya — who sat with Obama during an off-the-record conversation with Cuban activists in Havana — said the president’s ability to produce such dramatic changes was absurd. "To grant the new position of the White House the ability to open democratic spaces of expression within Cuba in that short period of time is wrong, irrational, and even disrespectful," she wrote on March 9.

With Google already looking to expand internet service in Cuba, the process of providing a faster and more pervasive way of unlimited information will only be propelled. And information will come from all over the world. "There's obviously a propaganda bias with the state media, but that doesn't mean the western media is better right?" said Henken.

In 2010, Raul Castro’s office released “Lineamientos de La Political Economica y Social” to improve the functioning of the Cuban economy. It made great announcements for reform within the party and yet said nothing regarding censorship. With Cuba beginning to move on a grass roots track towards democracy, demands for change by different parts of civil society will need to address how journalists play a role in establishing a new public sphere. Standing still in hopes of sporadic reform will not bring Cubans the voice they want, or need.