"A crisis point in our democracy": Why progressive leaders and thousands of others will risk arrest this week

"We have to stand for our highest moral and constitutional values," said Cornell William Brooks of the NAACP 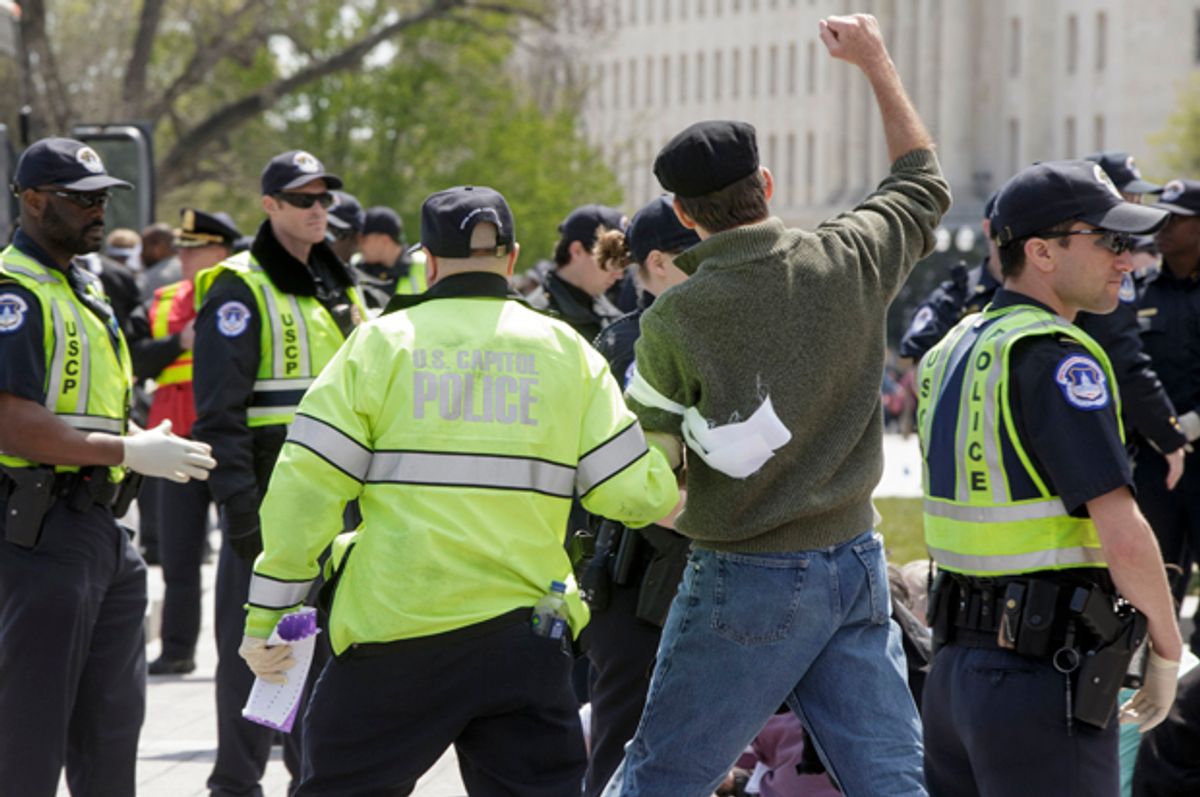 Hundreds of people from across the country, including leaders of scores of progressive groups, are being arrested outside the Capitol in Washington this week, where a Democracy Awakening mobilization is calling on Congress to restore voting rights protections and lessen the influence of big money.

"A broad and powerful movement is now erupting in the nation’s capital,” said Robert Weissman, president of Public Citizen. “Four hundred people were arrested on Monday as part of Democracy Spring, one of the largest civil disobedience actions ever at the U.S. Capitol. And more arrests are continuing every day.”

The protests, rallies and civil disobedience actions will continue through Monday, where thousands are expected to block entrances to Congress and then spend hours in jail, before they are released with charges likely dropped. What’s new here is that various wings of the progressive movement are coming together, rejecting the political culture created by Supreme Court rulings that gutted voting rights and campaign finance laws, and demanding that Congress pass reforms empowering people and not private wealth.

Brooks was among a half-dozen leaders of democracy reform and civil groups holding a teleconference Wednesday to highlight their growing movement. They specifically want Congress to restore the enforcement section of the Voting Rights Act, to pass and send to the states a proposed federal constitutional amendment allowing Congress to regulate the raising and spending of campaign funds, to hold hearings and vote on the latest Supreme Court nominee, and to implement other pro-voter and pro-small political donor laws.

Congressional Republicans, led by Senate Majority Leader Mitch McConnell, completely ignored the protesters and the arrests. McConnell didn’t acknowledge the questions from press on Tuesday, while aides tried to push reporters away. The protest’s leaders acknowledged that reality, but said they would keep pushing their agenda and "campaign of conscience."

“We increasingly see that having a functioning democracy is a precondition for us to have a functioning environment,” said Annie Leonard, executive director of Greenpeace USA. “I have personally been an environmental activist for over 30 years and in that time I have seen enormous progress on many fronts, but overall the scientific data tells us that the situation is getting worse. The level of change that we are accomplishing is not commensurate with the scale of the problem and the science right now.”

“The number-one obstacle is all of this work is our broken democracy,” she said, especially on climate solutions. “It has been so hijacked by big money. I am sure that everyone has seen the data. The U.S. senators who reject the fact that humans have caused climate change have received on average seven times as much campaign cash from oil and gas [interests], as those who actually acknowledge the science… The other thing is there are so many new obstacles to real people participating in our democracy.”

Leonard and others pointed to the deluge of newly restrictive state voting laws and more limited opportunities to cast ballots, such as ending early voting options.

“I am a theologically conservative evangelical Biblicist. That is why I am joining the Congress of Conscience and risking arrest—I don’t know any other way to be there,” said North Carolina’s Rev. William Barber II, pastor and Moral Monday architect. “We must challenge the way that evangelicalism has been hijacked in the public square and used against the various principles that were a part of fighting against slavery and fighting for the civil rights movement.”

“In North Carolina, we’ve seen the worst attack on voting rights since the 19th century,” he said. “Racial apartheid, redistricting, ending same-day registration and early voting, and strict photo [voter] ID, are all, not just one, targeted at a growing black and brown demographic in America. These attacks in North Carolina and all across the South especially, are contrary to our deepest moral, theological and constitutional values of equal justice and providing for a common defense and promoting the general welfare. These attacks are made possible by the gutting of the Voting Rights Act by a majority of the Supreme Court… The U.S. Attorney today has less power to enforce the Voting Rights Act than the U.S. Attorney General had on August 7, 1965 when it was first signed."

Restoring the Voting Rights Act has been ignored by the GOP-controlled Congress for longer than the worst anti-civil rights filibusters, Barber said, nor has the topic come up in the 2016 presidential debates so far. “This attack on voting rights is an attack on civil rights, labors rights, living wages, rights for women, rights for immigrants, health care, environmental justice, the LGBT community and criminal justice reform… This is undemocratic, it is immoral and it is wrong, and why I am willing, along with other clergy and pastors, to be arrested as a matter of conscience.”

Other protest leaders like Kai Newkirk of 99Rise.org, who interrupted the Supreme Court’s justices to protest their Citizens Unitedruling before being removed and arrested, said this week's Democracy protests are creating a “game-changing” moment.

“To meet the challenge of this crisis in democracy in our country, we had to reach into the tradition and history of our country of people that were willing to step up and put their bodies and liberty on the line, to challenge injustice and disrupt the business as usual and the status quo,” he said. “Anyone who doubts the potential and promise of what is going to happen on Monday at this Democracy Awakening and this Congress of Conscience, needs to look at what has already happened this month.”

Newkirk said more than 130 people from 33 states last week marched from Philadelphia to Washington, where most were arrested among 400 others on the Capitol steps on Monday. More than 80 elderly activists were arrested there on Tuesday. The protests continue throughout the week, with daily focuses on racial justice, labor solidarity, youths and student, and climate change.