Is Donald Trump a new Hitler? Hannah Arendt might argue that they're closer than you think 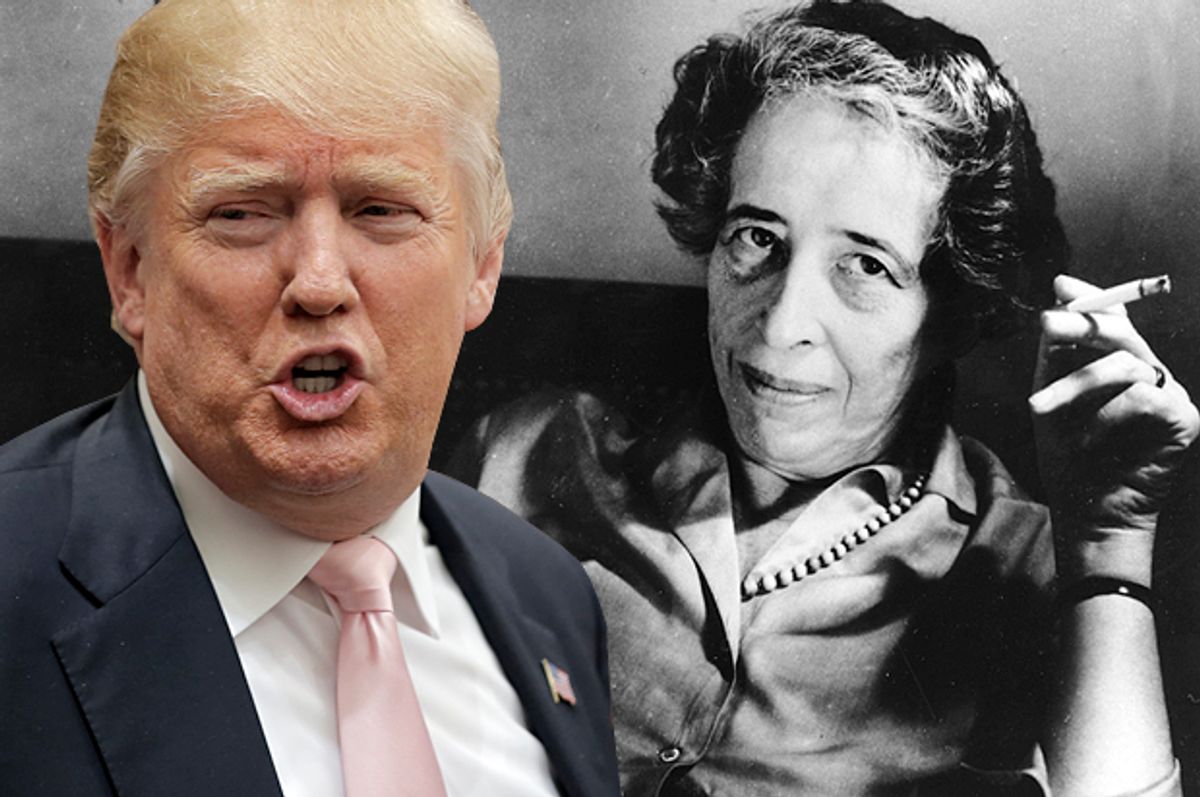 Hannah Arendt was one of the greatest intellectuals of the 20th century, and 40 years after her death she may have eclipsed other figures who seemed bigger at the time. Many of the issues that Jean-Paul Sartre pursued, for example, feel like arid historical curiosities today, informed by Cold War disputes that no one cares about anymore. Arendt’s central obsessions — war, totalitarianism, genocide, mass migration and displacement, and the ambiguous nature of human rights — are at least as relevant as ever. In the dismal and farcical age of Donald Trump, we badly need something like the scathing, cleansing force of Arendt’s intellect. There are moments in “Vita Activa: The Spirit of Hannah Arendt,” an urgent and often startling documentary from Israeli director Ada Ushpiz, where I could feel her trying to reach across the decades and talk to us.

Arendt didn’t have a high opinion of human nature or human group behavior, and given her life experience that's understandable. She was a woman of extraordinary intellectual gifts at a time when there was essentially no such thing as a female philosopher, or even a female academic. As Ushpiz’s film lays out in detail, Arendt was a child of privilege in pre-war Germany and then a Jewish war refugee and then an increasingly controversial celebrity who became widely viewed as a traitor to her own people. She remains most widely known today for a phrase that was generally misunderstood and became a cliché — “the banality of evil,” part of the subtitle to “Eichmann in Jerusalem,” her most famous book — and is still viewed in some quarters as a Jewish anti-Semite or a borderline Nazi apologist.

In a passage quoted by Ushpiz, which I believe is from the 1951 “Origins of Totalitarianism,” Arendt proposes that regimes like Nazism or Stalinism thrive by creating narratives that confer imaginary order upon the chaos and randomness of history. Human beings long for coherent stories that explain why bad things happen, Arendt says, even when those stories are delusional and dangerous. When fueled by enduring political or psychological currents like nationalism and racism, such fictional narratives become the justification for war and genocide and other historical crimes. To cite the obvious example from Arendt’s lifetime, if the social chaos and struggling economy of Germany in the 1930s was caused by a predatory Jewish conspiracy that had drained the German people of their life force, then everything made sense and the nation could be united toward a common goal and against a common enemy.

I doubt I need to belabor the point: There is one 2016 presidential candidate who has prospered beyond anyone’s wildest dreams by constructing just that kind of narrative, albeit an especially shapeless and nonsensical one. Arendt, I suspect, would view Trump as more hilarious than dangerous, a weak third-generation photocopy of a Hitler-type rather than the real thing. But his improbable rise would not improve her view of human intelligence considered as a whole, and might lead her to downgrade her almost-hopeful view of the possibilities of American democracy. (In fairness, Arendt had seen that decay pretty far by the time she died in 1975.)

Trump’s famous promise to build that wall along the southern border — and somehow make Mexico pay for it — at a time when the population of undocumented immigrants is steadily declining, is more like an infantile fantasy than a policy proposal. His vow to bar Muslims from entering the country, in the face of irrational panic and an exaggerated terrorist threat, is pandering of the worst kind. Neither of those things will ever happen, and my private opinion is that even most Trump supporters understand that. But those are like plot points in the amorphous Trumpian movie-narrative that whatever went wrong in America is somebody else’s fault, indeed almost anybody else’s. It’s more like a field of generalized suspicion and loathing than a coherent story: America’s innate greatness has been chewed away by the Muslims, the Mexicans, the blacks, the gays, the feminists, the transgender bathroom users, the liberal elite, the intellectual elite, the bipartisan political establishment and damn near everybody else who isn’t Trump or his downscale white audience.

Ushpiz makes a number of bold choices in “Vita Activa” that might not have been possible in an Israeli documentary even 10 years ago. She begins with newsreel footage of the Nazi death camps and the immediate postwar period, much of it from U.S. Army color films I’ve never seen before. But she’s using that material almost as context or punctuation to the complicated and difficult story of one woman’s intellectual odyssey, not as the central focus. What I’m really talking about, though, is Ushpiz’s use of Adolf Hitler, who is usually seen but not heard in war documentaries, and glimpsed only in a few familiar contexts: the Nuremberg rallies or greeting the troops or receiving bouquets from little girls in white dresses. In this film we hear Hitler talk, with subtitles — and he sounds a lot more like Donald Trump than I expected.

If you believe the Führer’s legendary oratory was all fervent, strident screeching about the evils of the Jews and the perfidy of the Allied nations, well, it wasn’t. Hate speech is a key ingredient of the fascist dictator’s rhetorical mix, as Arendt might put it, but far from the only one. In a speech Ushpiz shows us, Hitler’s approach is strikingly Trumpian: a few nonspecific references to the enemies who are besieging and undermining the Reich, blended into a glowing portrait of a paradisiacal future of full employment and universal prosperity, dominated by a rising generation of healthy, strong and “peace-loving” young Germans. It was relentlessly upbeat, and strongly resonant of Trump’s vow to “make America great again” without defining what that means or what it might involve, or his promises that his leadership will bring a new era of “winning” after decades of “losing,” if irritating impediments like the constitutional separation of powers can be overcome.

Trump isn’t Hitler, not least because he represents no more than a vague minority sentiment rather than an organized political party or movement. But he reflects the all-too-human currents of vapidity and weakness that made Hitler possible, and that drove Hannah Arendt nuts. Although Ushpiz gives Arendt’s critics a chance to air their grievances, “Vita Activa” is clearly meant to argue that the hostile reactions she provoked were unfair, and caused her tremendous suffering. Some of the film’s most striking footage comes from a mid-‘60s German TV interview, during one of Arendt’s infrequent post-war visits to her birth country. Chain-smoking and disheveled, but still ferociously articulate, she seems visibly tormented by the public's misperception of the Eichmann book. I suppose she knew by then that it would do no good to point out that she herself had been a refugee from Hitler, had spent the war years writing for a Jewish newspaper in New York, and after 1945 worked for a Zionist group that resettled Jewish children in Palestine and then Israel.

If I can say this as a non-Jew and an outsider to the Holocaust legacy, Arendt’s 1963 “Eichmann in Jerusalem” — a philosophical, historical and journalistic account of the trial of Nazi war criminal Adolf Eichmann — stands in the greatest tradition of rabbinical self-scrutiny, and perhaps even Jewish prophecy. Her failing, if it was a failing, was both political and rhetorical: Arendt refused to do anything she understood as intellectually dishonest, including flattering the Israeli government for the evident contradictions of the Eichmann show trial, which she saw as a symbolic act of blood vengeance (and as such understandable) dressed up as a normal legal proceeding. Similarly, she declined to spare the feelings of Holocaust survivors, or sanctify their experience with what she perceived as forced religiosity, partly because she saw the historical crime committed by the Nazis as a crime against all of humanity, rather than a genocide uniquely targeting the Jews.

That whole area of discourse remains intensely contested, even 55 years after the execution of Eichmann and 70 years after the fall of Hitler. Arendt said and did a number of unfortunate things, starting with her tangled relationship with Martin Heidegger, her philosophical mentor and sometime lover, who joined the Nazi Party in 1933 and (despite later denials) appears to have supported its goals well into the war years. (Some accounts suggest that Arendt resumed her affair with Heidegger after the war, when she definitely should have known better.) Her infamous description of the Sephardic Jewish population of Jerusalem as “an oriental mob, as if one were in Istanbul or some other half-Asiatic country” is redolent of the worst kind of European racism.

As for the charge that Arendt felt inadequate empathy for Hitler’s victims, or that her account of Eichmann’s trial amounted to a convoluted apology for his crimes or a claim that he was some minor functionary with no moral responsibility, I don’t think anyone could read “Eichmann in Jerusalem” now and think that. At the time, that reaction was understandable and perhaps inevitable: Arendt tried to write a work of complex political theory and analytic philosophy, on deadline, in the aftermath of an enormous historical trauma she had personally experienced. She didn’t believe that sentimentality or melodrama would help her come to grips with what had happened, or with the distinctive modern personality type she observed in Eichmann: a soulless, submissive sociopath, who indulged his most primitive and hateful instincts as a Nazi official but played the role of humble penitent once he was in the hands of the Jewish state. The Eichmanns are still with us, almost everywhere; there was only one Hannah Arendt.

“Vita Activa: The Spirit of Hannah Arendt” is now playing at Film Forum in New York. It opens April 22 at the Siskel Film Center in Chicago; April 29 at the Monica Film Center in Los Angeles and the Moviehouse in Millerton, N.Y.; May 6 at Cinema Salem in Salem, Mass.; May 20 at the Screen in Santa Fe, N.M.; and June 12 & 15 only at the Cleveland Museum of Art, with more cities and home video release to follow.