It's not "choices," it's pure sexism: Women get paid less for one reason — they're discriminated against

Women continue to make 79% of what men make, and it's not because they freely choose to make less 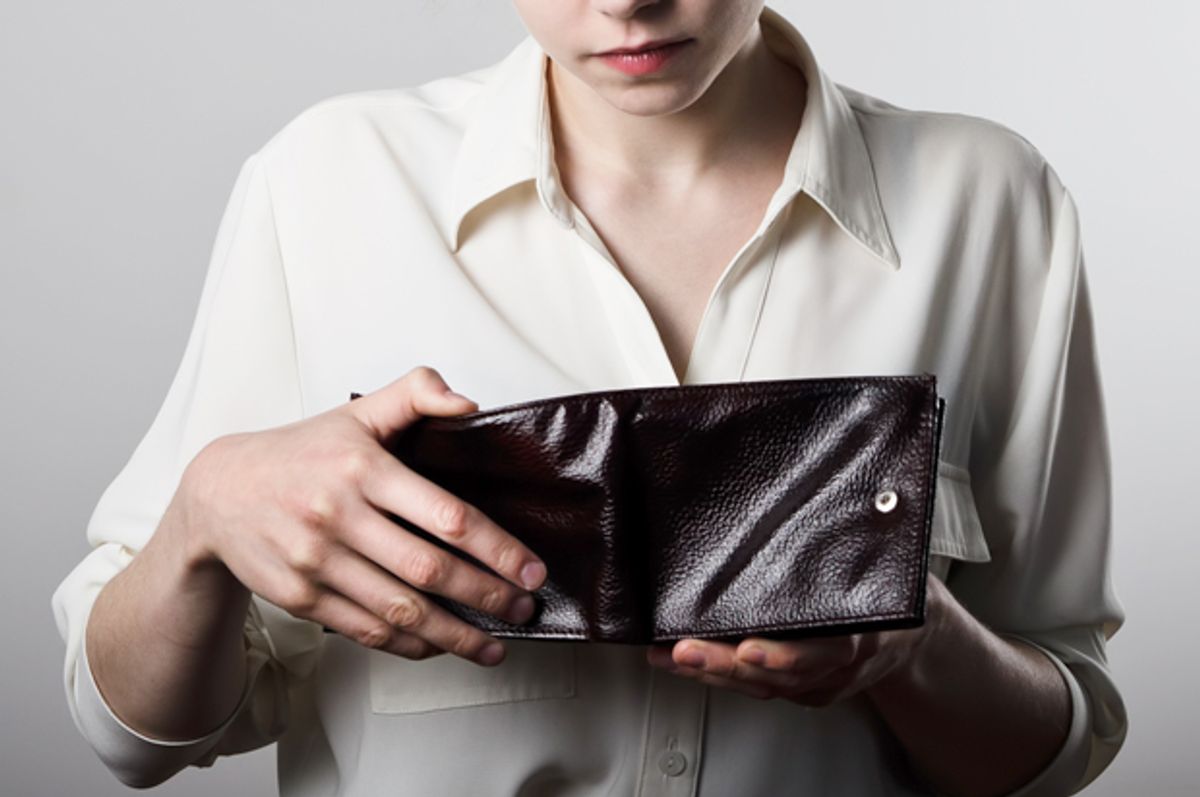 Tuesday, April 12 was Equal Pay Day, an annual day set aside to symbolize "how far into the year women must work to earn what men earned in the previous year", according to the National Committee on Pay Equity. The American Association of University Women (AAUW) used the day to release a report on the reasons women continue only to make 79 cents to a man's dollar and dispelling common myths that it's about women's "choices" and not sexism.

"Critics charge that pay differences between men and women are simply a matter of personal choices," the report reads. A common example is that women tend to go into lower-paying professions than men, being, say, a teacher instead of an engineer. Women also are more likely to go part-time or quit entirely when they have children, which means that even if they do return to full-time work, they've fallen behind in their career development.

But even taking these personal choices into account doesn't explain away the pay gap, as AAUW explains. Even after controlling for factors like type of job, college education, months at work, and martial status, there's still a 7-12 percent gap between men and women that suggests that women are being valued less by their employers.

That said, the notion that women are making "personal choices" to make less money and therefore it can't be sexism is pure poppycock. Women's choices aren't made in a vacuum, but informed by societal and familial expectations and attitudes that steer women away from being full competitors in the workplace and towards prioritizing domestic duties so that men don't have to deal with them.

If you're told from the cradle that girls aren't as smart or good at math as boys and your efforts to join math and science programs result in a wall of sexual harassment, giving up and deciding to pursue a career, like teaching, that is less threatening to the sexist order is going to feel like a more attractive option. It's particularly silly to deny that it's sexism at play when women but not men scale back their ambitions in order to have children. The notion that it's women's job but not men's to do the nitty-gritty daily work of raising children is the definition of sexism.

Anti-feminists, however, like to talk about these so-called choices as if they are made in a vacuum. Carly Fiorina released an ad, oh-so-coincidentally timed for Equal Pay Day, that wallowed in this empty-headed "choices" rhetoric.

"A feminist is a woman who lives the live she chooses," the ad begins.

Cool. I choose to be a rich rock star who sleeps until noon and who never seems to gain weight no matter how much I eat. Oh wait, it doesn't work that way? In the real world, choices are not free, but constrained by what opportunities you have and what expectations are put on you? Huh.

Or she can, in this case, choose to use an example that perfectly illustrates how dumb this gambit it. Because, while our world is vast and crazy things happen every day, we can all be safely assured that no woman has sat around saying, "Well, I could run for president or devote my life to a patriarchal religious ideology. Both sound good. Let me flip a coin. God knows my husband certainly has no opinions on the matter."

If you give it half a moment's thought, it becomes apparent that this "choices" gambit is, in and of itself, a deeply sexist idea. To believe that men and women have equal opportunities and social pressures, but women just happen to make less money and have less power in the world is not believing, as Fiorina would have it, that "we are all equal". On the contrary, you're saying women are inferior: Less intelligent, less ambitious, less interesting.

If men and women were equal in both talent and opportunity, more men would be housewives and we'd have had a female president already. So this theory that we have equal opportunities only works if you assume women are inherently less talented.

Indeed, as a Media Matters wrap-up for Equal Pay Day demonstrated, people who roll this "choices" argument really do think women are inferior to men.

"Look, there's different ways to look at the data, but the big picture here is women do earn less in America because they choose to," Gavin McInnes argued on Fox News last year. " They're less ambitious. And I think this is sort of God's way, this is nature's way of saying women should be at home with the kids."

You can dress that kind of rhetoric up with flowers and cards, but there's no getting around the implication that women are a servant class put here to do all the tedious work men are too good to bother with.

While McInnes was the most blatant, all the other Fox hosts trying to explain away the pay gap fell into the same trap of pinning the blame on women's inherent inferiority. O'Reilly harped on "the emotional difference between men and women", which he argued is the reason that women go part-time when they have kids, clearly suggesting that women are simply too soft-headed to make the hard choices men can make without breaking a sweat.

A common tactic is to pretend that the insult to women's ambitions and intelligence is actually a compliment about the goodness and humility of the fairer sex.

It's a clever way to package an insult as a compliment, portraying women as more cautious, when actually what he's trying to suggest it that women are more fearful. Bolling would probably collapse into a fear coma having to deal with stuff that's just considered life for women, from being harassed by terrifying men on the street to that high-risk gamble known as childbirth, but he sure likes the idea that he's inherently brave and strong just because he was born a man.

To make this all worse, invoking sexist stereotypes in order to deny that discrimination is real only contributes to the discrimination. It's not surprising that employers give men more promotions and opportunities in a society where we're constantly hearing about how men are smarter, more ambitious and less domestic. Under the circumstances, of course employers are going to invest more in men.

This is borne out by research that shows when employers are given identical resumes, but one is for "John" and one is for "Jennifer,"  they are more likely to choose John as the more promising candidate. Because John has an invisible added bonus, a society that consistently treats men like they're better than women. Which is why it's time to stop making excuses for the pay gap and instead turn towards getting rid of it altogether.