Kasich or bust? The Ohio governor is the GOP's only hope to beat Hillary, but he isn't "conservative" enough for the stubborn Republicans

A new report says Trump and Cruz would lose badly to Hillary, but Obamacare-friendly John Kasich might actually win 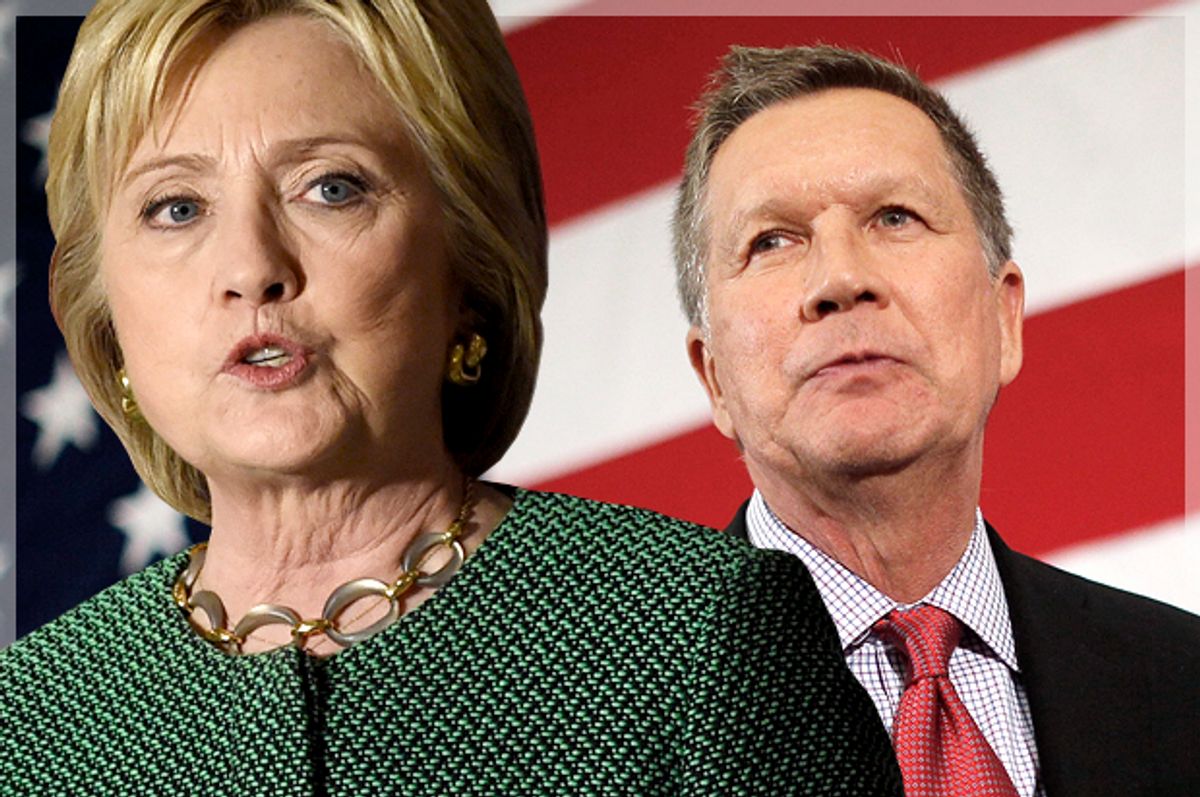 It’s a bit early to be thinking about such things, but there’s a general election coming in about seven months that, if some of the more pointed campaign rhetoric is to be believed, will seal the fate of the United States of America once and for all. The tumultuous primary season has churned out two potential Republican nominees – Donald Trump and Ted Cruz – whose general election prospects are, to put it mildly, uncertain. Cruz is an ideologue with the personal appeal of heat rash, and Trump is an authoritarian dolt who alienates just about every key voter demographic. So even though it’s early on yet, it’s fair to wonder how well these guys would perform when they have to take their case to the broader American public.

The all-too-predictable answer, according to a new analysis from Morning Consult, is that they’d get thoroughly and completely destroyed. In hypothetical match-ups with likely Democratic nominee Hillary Clinton, both Trump and Cruz lose badly. But what’s surprising about their findings is that Cruz is actually a weaker candidate than Trump – he loses to Clinton in the Electoral College 332-206, the same map and margin that Barack Obama put up against Mitt Romney in 2012. Trump, meanwhile, replicates the Romney map and tacks on Maine’s four electoral votes. It’s a small and ultimately meaningless difference, but it reinforces the idea that the GOP will still be facing a hard slog even if it manages to elevate Cruz above Trump.

What’s also interesting about this analysis is that it does not foresee the truly epic Trump electoral collapse that Republicans are dreading and Democrats are salivating over. All the talk of #NeverTrump types staying home on Election Day has led some people to speculate that Trump would lose critical Republican strongholds like Texas on his way to a Mondale-esque blowout in the Electoral College. But that doesn’t show up in Morning Consult’s analysis, and it’s reasonable to think that the prospect of a Hillary Clinton presidency will transform much of the GOP’s #NeverTrump enthusiasm into grudging acceptance of the candidate as the lesser of two evils.

But perhaps the most fascinating part of Morning Consult’s number crunching is the projection they put forward for John Kasich, the odd man out in the Republican race who faces consistent pressure from conservatives to drop out for the good of the party. Kasich isn't likely to win the nomination given that he's way behind in delegates, but per the analysis, Kasich crushes Hillary in a general election one-on-one, 304-234. As with the Cruz and Trump match-ups, there caveats aplenty to append here, including the fact that Kasich hasn’t experienced anywhere near the level of scrutiny and criticism that the other candidates have faced. But Morning Consult finds that Kasich’s strength lies in his potential to hollow out the Democrats’ base of support in the industrial Midwest. Hillary still wins swing states like Virginia and Florida, but the Ohio governor romps through the Rust Belt.

This all points to a bitter irony for the GOP, given that Kasich has been consistently derided by his Republican critics for being insufficiently conservative to win the nomination. They resent that he committed a cardinal sin of Republican politics by forcing his state to accept Obamacare’s expansion of Medicaid, and they bristle at his suggestions that expanding health coverage for poor Ohioans was the morally correct thing to do, ideological demands notwithstanding. This week, former 2016 contender Marco Rubio said that the Republican nomination should go to a conservative, and he deliberately excluded Kasich from that group:

Sen. Marco Rubio (R-Fla.) said he wants the Republican presidential nominee to be a conservative — and Ted Cruz is the only candidate who qualifies.

Rubio said in an interview with Mark Levin on "Levin TV" Tuesday that of the candidates in the GOP race, the "only one that fits that criteria is Ted Cruz." He qualified that comment by adding, "at this moment, of the candidates that are still actively campaigning."

Republicans are slowly coalescing around Cruz because they view him as the only appropriately conservative alternative to Trump. Kasich, meanwhile, keeps getting the cold shoulder even though he seems to be the only one of the remaining active GOP candidates who wouldn't have a deep hole to crawl out of to win the general.