Say no to this YES to SEX app: Avoiding "awkward" consent conversations shouldn't be a goal 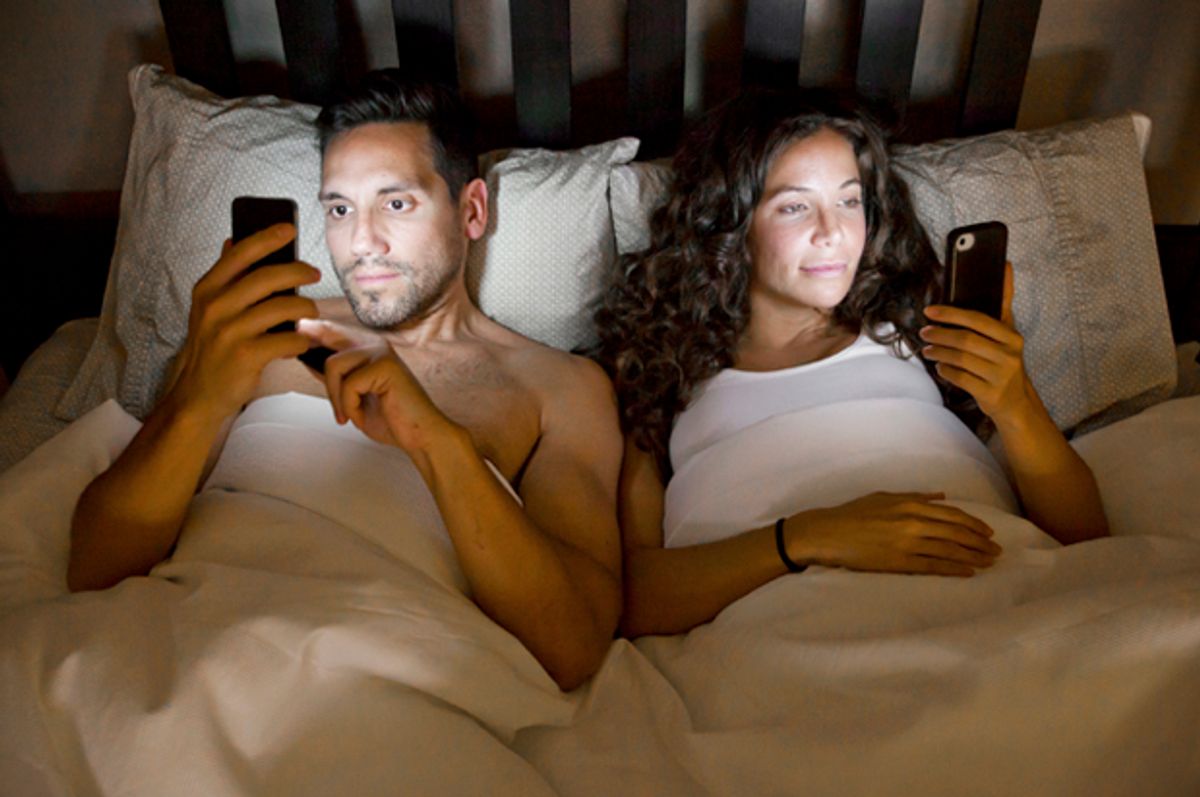 On Friday, the YES to SEX app launched, a seemingly timely technological advance during both Sexual Assault Awareness Month and STD Awareness Month. “This app aims to make all sexual partners stop and think for a few seconds together to evade sexual assault issues due to miscommunication and to avoid getting or spreading the more than 1 million sexually transmitted infections (STIs) that are acquired worldwide each day,” touted a press release.

Once you download the app, intended for pairings of two people, you’re prompted to pick a mood, such as romantic, seductive, thrilled or “sorry, not interested” while your partner picks among similar options, such as sweet, electrified, lucky and “sorry, not interested.” Then you’re both asked to confirm you’re 16 or older, that “Neither of us are: asleep or passed out, mentally incapacitated, physically helpless, or too intoxicated to CONSENT” and that you are voluntarily consenting to proceed. After choosing amongst birth control and protection options you’re prompted to use your phone’s voice recorder to either verbally consent or decline. Choosing “sorry, not interested” at the start or failing to affirm your consent closes the app.

The app’s founder, Wendy Mandell-Geller, was inspired by her three college-age children and recent statistics about STI transmission, stating, “I want to empower teens and young adults to initiate conversations with their partner(s) about consent and the use of protection in a modern, approachable manner that fits into their lifestyles.”

I believe that Mandell-Geller has good intentions with this app; however, I don’t think even the most sophisticated app, which Yes to Sex is not, is ever going to solve the problem of sexual consent or STI transmission. It’s adding a middleman to a process that should be about getting to know another person, or at least, getting to know how they feel about what’s about to take place.

In 2014, when the sexual consent app Good2Go launched, before being pulled from the market soon after, very good questions were raised about the problematic nature of attempting to quantify consent ahead of time. If a person agreed to X act via app but later changed their mind, could their use of the app be used to disqualify their later objection? The very notion that we should be turning such a personal conversation over to technology rightly aggravated many commentators. TechCrunch asked, “The notion of a ‘simple sexual consent app; should immediately set off alarm bells, given its oxymoronic feel. If sexual consent boils down to a question with a simple yes/no answer then why on earth do you need an app for that? And if it’s not so clear cut, well then turning an intimate dialogue between two people into a digital threesome is surely only going to complicate matters further — especially given that usage of a sexual consent app might itself apply subtle pressure for consent when someone isn’t ready or willing to do so.”

YES to SEX does something different than just requiring you to touch a button on your phone: it requires users to verbally state that they are consenting to sex. But for the life of me, I can’t imagine the college students and young adults who are its intended audience whipping out their phones in the heat of the moment to take those “few seconds together” to answer these questions and record voice memos.

Mandell-Geller certainly has reason to be concerned about the issue of sexual consent, especially on college campuses. A 2015 National Institute of Justice report noted that, “college administrators might be disturbed to learn that for every 1,000 women attending their institutions, there may well be 35 incidents of rape in a given academic year.” Most campus sexual assaults take place in the dorms, according to Clery Act data.

The problem is being approached on multiple fronts; Senator Kirsten Gillibrand has sponsored the Campus Accountability and Safety Act, which, in her words, “would require every college and university in the country to take part in a national survey that asks students about the campus sexual assault climate at their school. The results would be made public, for any prospective applicant and any parent to see and be able to consider during the admissions process.” Michigan senators Debbie Stabenow and Gary Peters are requesting a $137.7 million for the Department of Education’s Office for Civil Rights to better investigate college students’ sexual assault complaints. And, of course, there are the Yes Means Yes affirmative consent laws enacted by New York and California.

Cornell student Andrea Osborne wrote a recent opinion piece in The Cornell Daily Sun about the need for talking about consent on college campuses, because, in her experience, “too few people respect their sexual partners,” including some men who keep “checklists of all the women they have slept with from a particular sorority or ‘passing someone around’ for their own amusement and then degrading them.” Is it reasonable to think that a simplistic app questionnaire is going to make a dent in a problem like that?

Osborne concluded that, “We must communicate, honestly and openly, drunk and sober, with sexual partners. Whether you’ve been in a relationship for years or are getting to know each other for the first time, you will never regret asking someone for consent. It may seem awkward at first, but this is the best way to ensure that both partners are getting what they want out of the experience rather than what they think they should do based on societal pressures or the actions of their peers.”

Osborne is right—if you aren’t used to those conversations, they may indeed be awkward. It may take trial and error to figure out how you feel comfortable phrasing those questions, or even talking about what kinds of sex are on the table. But that’s not an excuse not to have them, or to foist the effort off onto an app which, at best, can only prompt users for responses.

The app’s description in its press release is telling: “Launched in 2016, YES to SEX helps students avoid the awkwardness of discussing ‘Yes’ or ‘No’ to sex.” Firstly, I don’t believe it actually helps them avoid the discussion, because you still have to get the other person to engage with the app, but more importantly: why would we want to discourage them? These vital conversations aren’t ones we should want to short-circuit or oversimplify; figuring out what form of protection is best for you is probably going to require more than a few seconds.

I’m not denying that students, including those under 16, need guidance and resources about sex in addition to what they are—or, more likely, aren’t—receiving in school (if you’re looking for an excellent one, try Scarleteen), but YES to SEX is certainly not “sex ed in your pocket.” Would using this app be better than not having any kind of interaction around consent and protection? Sure, but that’s not enough to endorse it. It’s not going to magically swoop in and solve the problem of campus sexual assault or unwanted pregnancy. It might sound like a good idea in theory, but it in no way eliminates the need for people to actually talk with each other about their sexual decision making.