Did Time magazine bum you out? The internet debunks mag's claim that you owe $42.998.12 for the national debt 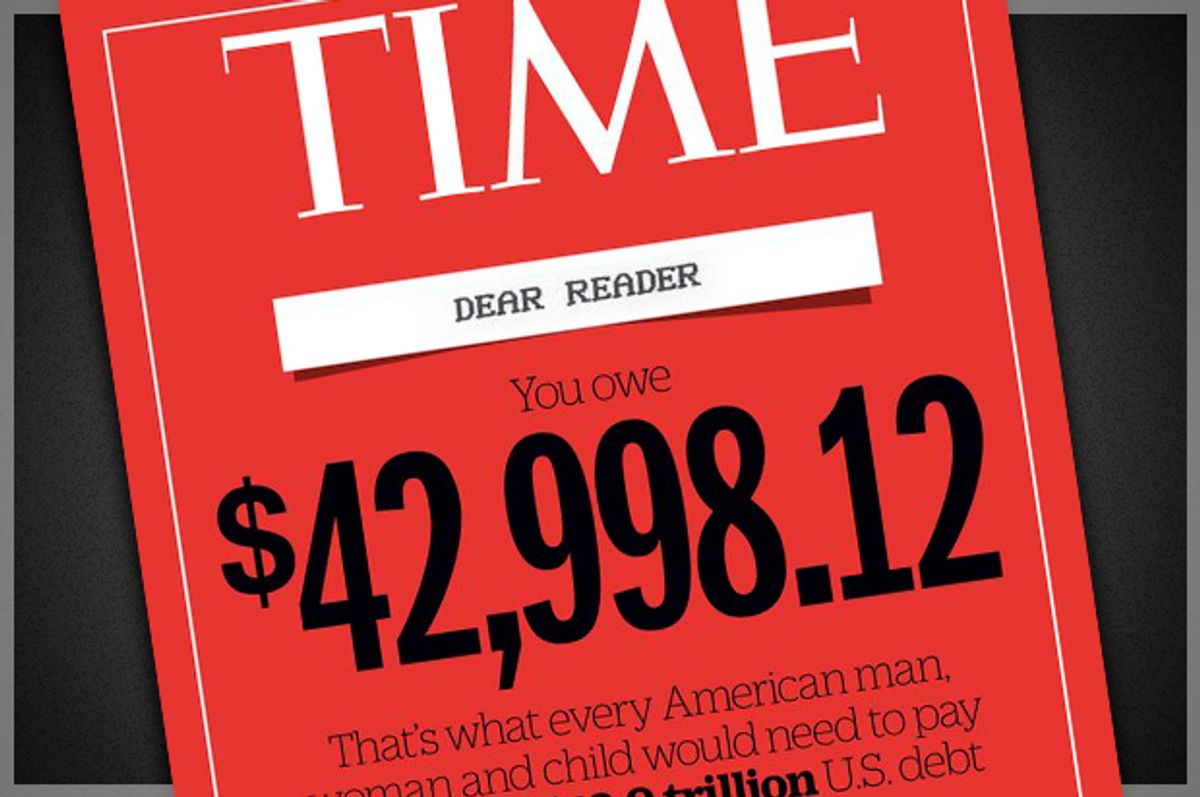 Time magazine is taking some heat for the provocative (some say misleading) cover story of this week's issue, which tells readers they each owe $42.998.12 in order to pay off the national debt.

The main issue most critics seem to have with the piece is that while the amount of the debt burden that falls on each citizen makes for an interesting rhetorical framing device, it has little to do with actual economic policy.

For starters, it seems to imply that if the national debt is not serviced immediately, America faces the imminent threat of insolvency. But as Owen Davis notes in the International Business Times:

That line or reasoning obscures some basic facts about how government debt operates. At the most basic level, public debt is not due all at once, now or in the future. Anyone with a student loan debt or mortgage knows that’s not how debt works. The Treasury Department issues debt at maturities ranging from a few days to 30 years. Today, the average dollar owed by the government comes due in 69 months, or 5.75 years.

So the idea of each citizen chipping in $42.998.12 to pay off the national debt in one fell swoop is kind of silly. But even if the government paid off its debts incrementally, would eliminating the national debt be a goal worth striving towards?

Paying off the national debt "would be stunningly foolish," writes Jordan Weissmann in Slate:

For one, markets would go crazy. The entire financial world runs on Treasury bonds—they are the gold standard of safe assets, and are essentially treated as the next closest thing to cash. Paying them all off would suck the blood out of the world's financial circulatory system.

Erasing the whole debt, or even a significant chunk of what the U.S. now owes, would also be a waste of resources, especially at a moment when the economy is underperforming its potential. Every dollar we spend paying down our obligations could, theoretically, be used on something more productive that would grow the economy long-term, like fixing our infrastructure, or making sure we have a functioning health care system. Faster growth would, of course, shrink our debt compared as a share of the economy. Cutting spending to pay off debt, on the other hand, could slow growth, and leave us right back where we started.

The idea that the national debt and the federal government's solvency are necessarily correlated is misguided, writes Davis:

“The government doesn’t have to pay down its debt. We can roll this over forever,” [says Dean Baker, co-director of the Center for Economic and Policy Research].

This may sound like bunkum to anyone with a bank loan; household debt always comes due. But the government isn’t a household. If the U.S. wants to issue bonds to cover debt payments, there is literally a world of investors who will happily buy up bonds at low interest rates. The world has little fear that America will ever default.

Baker compares the government not to an individual — whose lifespan is finite — but to a company. Companies hope to operate in perpetuity. And like the government, nearly every corporation maintains a significant level of ongoing debt, often reaching into the billions. General Electric, for instance, currently holds nearly $200 billion in debt. [...]

[T]he U.S. government plans to be around a bit longer than any 30-year bond. Indeed, there has been a national debt since 1835, and there will continue to be one. As Alexander Hamilton said, “A national debt, if it is not excessive, will be to us a national blessing. It will be a powerful cement to our union.”

Kevin Drum of Mother Jones sums up the arguments against the Time story nicely:

You will never have to pay down this debt. Nor will your children. Or your grandchildren. Just forget about it.

And if we ever do have to pay some of it down? We'll get to pay it off over decades, just like any other debt. And the rich will pay a bigger share than you. But I guess "You might someday owe $145 per year" doesn't make a very good magazine cover.