Hey, Democrats, stop gloating — your party is imploding right before your eyes, too 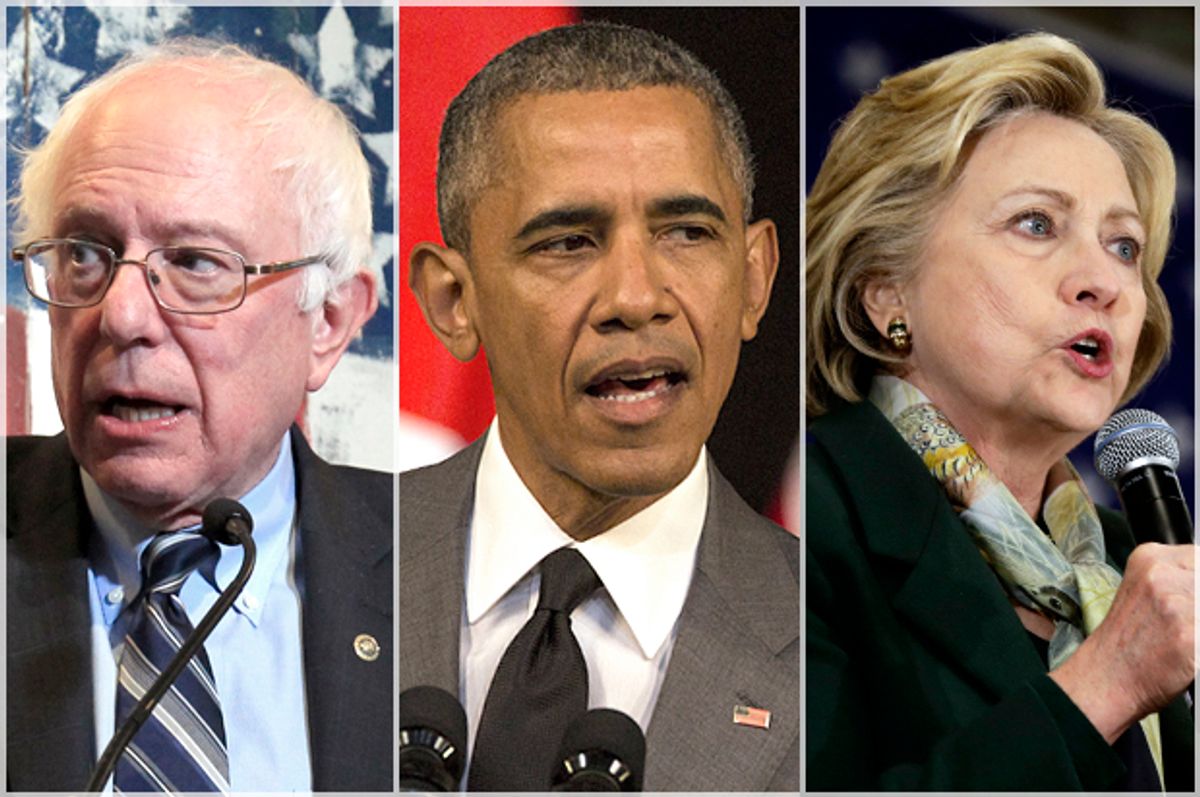 The governing narrative of the 2016 Presidential campaign so far has been that GOP is imploding. All it took was the adolescent agitprop of Donald Trump to lay bare the rift between the Party Establishment (i.e. corporate donors) and the Party Base, whose anxieties and prejudices they have been manipulating for decades.

There’s been a gleeful sense of schadenfreude in the coverage churned out by left-leaning outlets in particular. How lovely it has been to watch the conservative movement’s house of cards fall into shambles!

The problem, of course, is that Republicans aren’t the only party facing an historic rift. Over the past two weeks, it’s become increasingly obvious that grassroots liberals are thoroughly disgusted by their own party establishment.

The Republicans no doubt face a brutal convention, in which they must either nominate an unpopular candidate or incur the wrath of the masses by handpicking an establishment figure.

But the Democrats already face a kind of inverse dilemma. Barring a miracle, they will nominate an establishment candidate who is at best tepidly supported, and at worst reviled, by those who have rallied behind her insurgent foe, Bernie Sanders.

Remember, the whole primary season is designed to consolidate support behind the frontrunner. At this point in the race, with only one opponent—an elderly socialist from Vermont with a degree from the Larry David School of Charm — Clinton should be turning her attention to the general election.

Instead, she’s lost eight of nine contests many by a wide margin, and is barely hanging on in her home state, where her opponent is drawing huge and ecstatic crowds.

Right wing pundits—a sad and desperate lot at the moment — eagerly compare Sanders to Trump. The idea here is that the widespread disgust with Washington’s dysfunction has opened the door to outsider demagogues who spout lurid promises.

In fact, Sanders and Trump have about as much in common as George Wallace and Eugene Debs. Sanders isn’t trying to sell steaks or live out some Reality TV fantasy. He entered politics from the tradition of social justice .

The reason he keeps beating Hillary Clinton is because a huge portion of the electorate—particularly young voters—is yearning for the kind of explicit social justice he’s prescribing. To put it bluntly: he’s articulating a moral vision, not an electoral path to the White House.

And that, frankly, is what the Democratic Party used to do, back in the era of the New Deal and the Great Society. It offered as its essential pitch to voters a compassionate and responsive government that sought to combat — or at least mitigate — the corrosive values of a capitalist theocracy.

What does the modern Democratic Party offer? The strategy put forward by Bill Clinton was called “triangulation.” And while it may have worked in an electoral sense, the de facto result was a strategy of appeasement that left Democrats pushing conservative policies: welfare reform, tax cuts, financial deregulation.

Obama’s signature legislative achievement, the Affordable Care Act, is essentially the program Bob Dole proposed back in 1993. His solution to our suicidal dependence on fossil fuels—cap-and-trade—is yet another recycled Republican idea.

The modern Democratic Party, in other words, has chosen to enable — and in many cases sponsor—policies that have allowed capitalism to act like a giant centrifuge, concentrating wealth and power in the hands of the few to the detriment of the many.

This is why a majority of Democratic primary voters not only identify as liberal but believe that socialism has a (gasp!) positive impact on society.

The underlying message of the Sanders campaign is that rank and file democrats no longer believe in capitalism as a guiding force in our economy or, especially, in our politics. And they are identifying mainstream Democrats — from Hillary Clinton to DNC chair Debbie Wasserman Schultz—as defenders of a status quo that amounts to crony capitalism.

The logic isn’t terribly subtle. If you raise funds from the financial and fossil fuel industries, or collect millions in personal fees for speeches to Wall Street executives, you are beholden to them. As a rule, politicians don’t police their patrons.

In squaring off against Barack Obama, Hillary Clinton never had to face such stark questions about her own integrity, because both of them were willing to exploit the corruptions of the campaign finance system. They passed for liberal, because they were the only options.

For the first time since the Great Society, a candidate has staked out authentically progressive positions: bleeding private money from politics, reforming our criminal justice system, insuring education and health care as rights. And paying for these programs by rolling back the massive tax breaks of the past few decades, and closing the corporate loopholes.

These solutions only sound “radical” because a deluge of corporate money has created a cloud of propaganda expressly intended to obscure just how far to the right our political discourse has lurched in the past half century.

Most people have no clue (for instance) that the top tax rate during the Eisenhower Administration was 92 percent. Nor that Richard Nixon himself once proposed a universal health care program.

The reason Sanders appeals to so many young voters is precisely because they have not been exposed to this Orwellian miasma of misinformation. They are not victims of the Stockholm Syndrome that afflicts so many so-called “pragmatists.” What young voters see is one party hell-bent on ravaging government so that plutocrats can run the show, and another devoted to a pattern of moral acquiescence.

To put it more affirmatively, Bernie Sanders hasn’t moved the Democratic base to the left. He’s revealed a base that has always been there, one that is tired of accepting “the lesser of two evils” as an electoral argument.

The skepticism around Clinton as a candidate stems from her role in public life, her votes to invade Iraq and authorize the Patriot Act, for example, as well as her cozy relationship with a host of corporate bundlers.

Sanders supporters don’t just want a candidate who can stand up to nihilistic bullies across the aisle, the old white guys (and their corporate minders) who trot out aggrieved nativism and intransigence every four years. They want a candidate who rejects the failed strategy of moral accommodation embraced by the Democratic Party itself.

Hillary Clinton will probably be the Democratic nominee for president, and will in all likelihood beat Donald Trump or Ted Cruz, if either one is her opponent. But beating an unpopular right-wing lunatic will not mend the rift among Democrats. It will only forestall a broader and more divisive fight for the soul of the party.

The center cannot hold. A growing plurality of democratic voters wants a true progressive agenda. If Clinton and party insiders ignore this reality, such voters will begin to look elsewhere. They will not view themselves as having left the Party. The Party will have left them.