Without ever mentioning his name, Warren takes down Krugman's latest NYT column on the root of the 2008 collapse 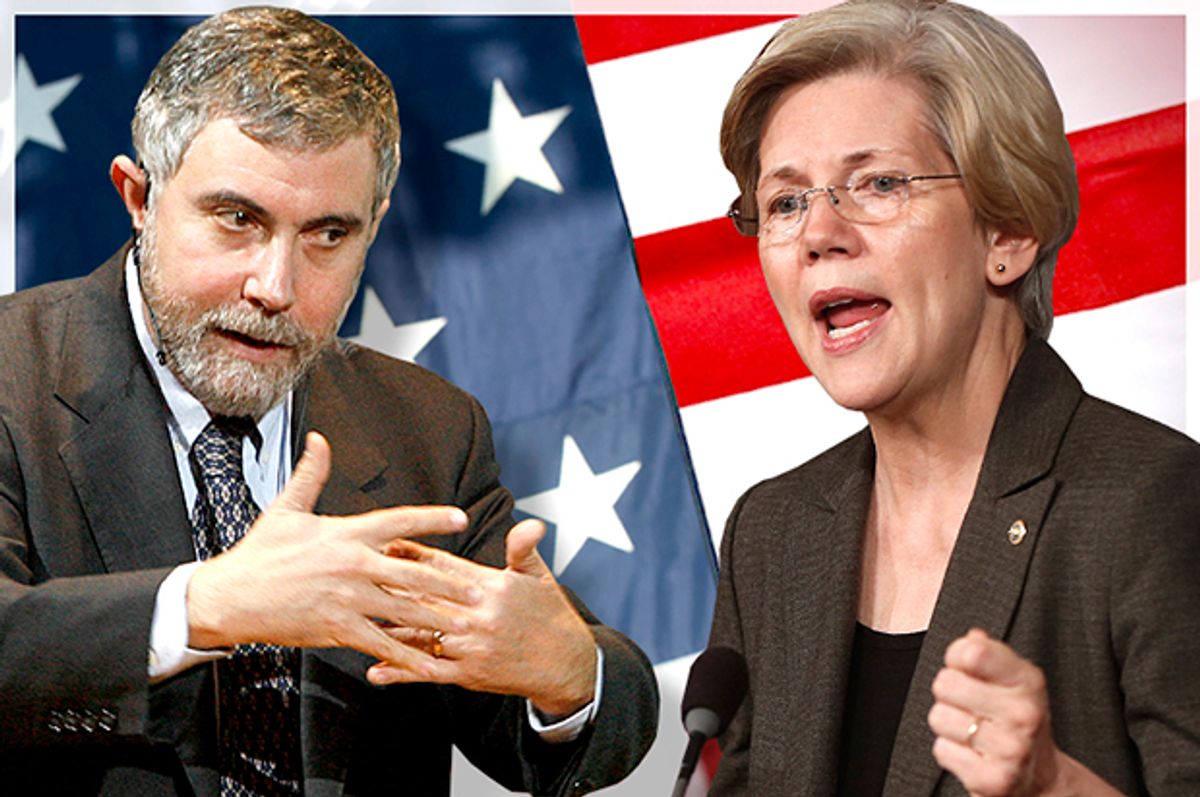 In his New York Times column on Friday, economist Paul Krugman argued that Democratic presidential candidate Bernie Sanders' rhetoric on Wall Street banks “misses the point,” claiming that the 2008 financial “crisis itself was centered not on big banks but on ‘shadow banks’ like Lehman Brothers that weren’t necessarily that big":

The easy slogan here is “Break up the big banks.” It’s obvious why this slogan is appealing from a political point of view: Wall Street supplies an excellent cast of villains. But were big banks really at the heart of the financial crisis, and would breaking them up protect us from future crises?

Many analysts concluded years ago that the answers to both questions were no. Predatory lending was largely carried out by smaller, non-Wall Street institutions like Countrywide Financial; the crisis itself was centered not on big banks but on “shadow banks” like Lehman Brothers that weren’t necessarily that big. And the financial reform that President Obama signed in 2010 made a real effort to address these problems. It could and should be made stronger, but pounding the table about big banks misses the point

But on Wednesday, news broke that five of the nation's biggest banks failed a mandatory "stress test," rendering them all "too big to fail" years after legislation was passed to pare these banking giants to a size whereby an individual bank's failure would not wreck the entire industry or worst yet, the global economy.

Reacting to this news on Wednesday, Massachusetts Senator Elizabeth Warren appeared to take a veiled swipe at Krugman's assessment that the shadow banking industry, as it is called, is actually more harmful to the economy going forward and that it was primarily at fault for the last global recession, not the big banks that remain too big to fail and that have come under near singular scrutiny since 2008.

“This announcement is a very big deal.  It’s scary,” Warren wrote on Facebook, pointing to the the Federal Reserve and FDIC's report. "The announcement also dramatically demonstrates the danger of taking our focus off the big banks as we think about how to prevent the next major crisis," she said, calling the report a "giant, flashing" warning sign.

"There’s been a lot of revisionist history floating around lately that the Too Big to Fail banks weren't really responsible for the financial crisis," Warren said, seemingly referring to Krugman as Huffington Post's Zach Carter first noted. "Wall Street lobbyists have tried to deflect blame for years. But the claim is absolutely untrue," Warren said, arguing that "there would have been no crisis without these giant banks."

"Today, our top regulators warned us about the danger of the biggest banks - and we would be foolish to ignore their warnings”: