HBO's film is a timely look at the thwarted, mishandled confirmation hearings that upheld a sad status quo 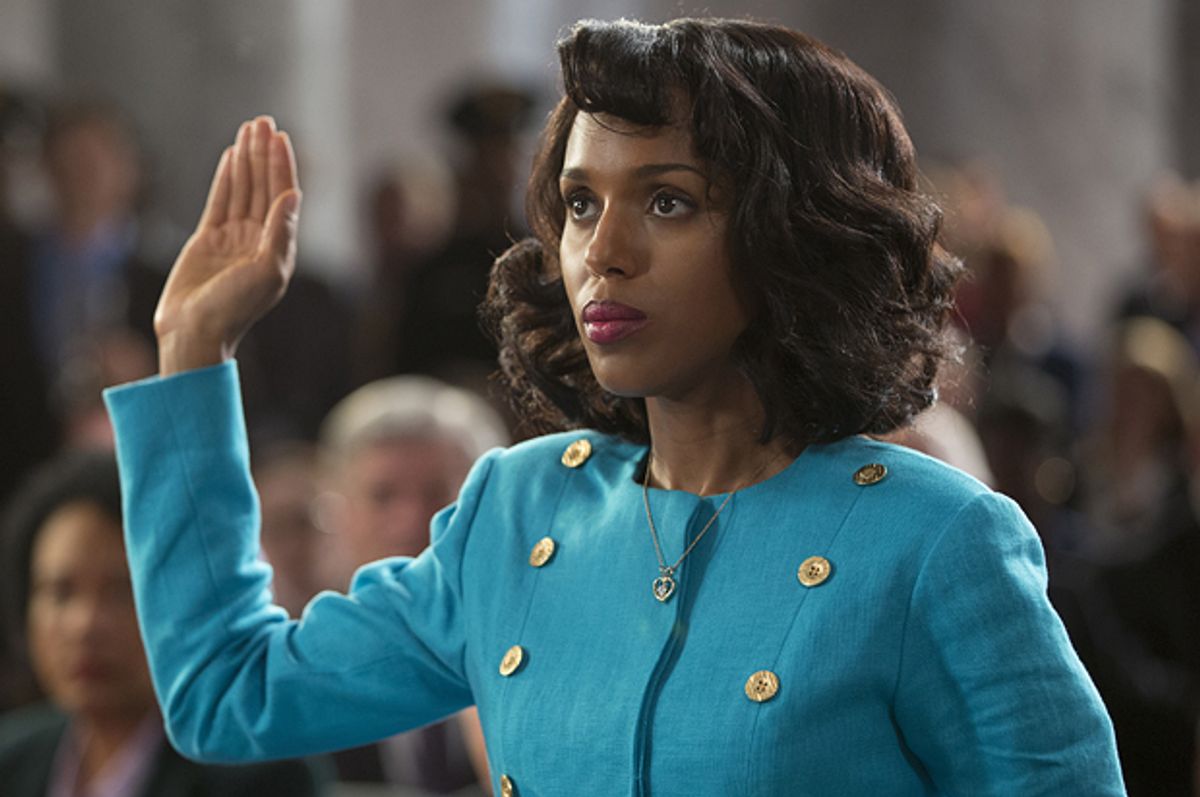 The timing of HBO’s original film “Confirmation,” debuting Saturday night, is accidentally quite appropriate. Naturally, any film about a Supreme Court nomination process — released in a major election year, when the next president will be appointing as many as four justices — is a relevant one. But “Confirmation” comes out just months after Justice Antonin Scalia was found dead at an exclusive hunting lodge in Texas, in the middle of one of the strangest presidential elections in history — and in a political era of weaponized identity politics, where candidates can run on a platform of excluding a whole religion and deporting an ethnicity but will be excoriated for running as a member of a marginalized minority, whether that is a woman, a Latino, a Jewish person, or any combination thereof.

Much like “The People V. O.J. Simpson: American Crime Story,” “Confirmation” aims to recreate a media circus from the ‘90s that most of its viewers already lived through (albeit with varying recollection or understanding of the topic). It is not nearly as adroit with the hairpin curves of tone, fact, and sympathy that “The People V. O.J. Simpson” delivered with so much verve. But in some ways, it comes to “The People V. O.J. Simpson”’s natural conclusion with much more efficiency; where the FX miniseries (brilliantly) allowed its viewer to hope, “Confirmation” is tinged with despair from the start. It makes for a less entertaining rollercoaster, but one that delivers the more relevant punch for the modern viewer.

The punch, in question, is this: Do we, as a society, know how to talk about sexual harassment? The answer, as framed by “Confirmation,” is emphatically no; the film depicts the end of the hearings less as a calculated fallback on the parts of the major players and more as an inability to keep going and maintain any sense of wholeness or dignity. The Clarence Thomas confirmation hearings brought several unsolvable things together for the American populace—the nastiness of politics, the prevalence of sexual harassment, the complexities of racial representation, and the careerism of the ‘80s—into one neat little package. (You can see how the confused climate of that media circus was just table dressing for the O.J. Simpson trial; “Confirmation” and “The People V. O.J. Simpson” would make a great double feature about how fraught the meeting between media and justice can be.)

And the story is—as it continually seems to be—that the country couldn’t handle it. “Confirmation” delivers no flashbacks to the incidents where Clarence Thomas (Wendell Pierce, in the film) allegedly sexually harassed Anita Hill (Kerry Washington) — accusations which include talking about pornography, his own sexual prowess, and the size of various women’s breasts. The audience of “Confirmation” receives the same he-said/she-said that viewers at the time did, albeit with a few more long, still shots of isolation. Thomas gardens in his yard with a laser-like, blinders-on intensity; Hill stares into the distance, with that combination of fragility and strength that has made Washington such a success on Shonda Rhimes’ “Scandal.” Both are enclosed in their own hermetically sealed points of view, and neither can quite be reconciled with the other; the audience is made witness to their exteriority, but can’t quite crack what is underneath.

As with so many exercises of historification, there is an almost gleeful presentation of the notable moments of the confirmation hearings, such as Senator Orrin Hatch (Dylan Baker)’s reading of “The Exorcist” during Thomas’ testimony and Senator Ted Kennedy (Treat Williams)’s impassioned declaration to focus on harassment during the proceedings. Everyone wears very bad wigs and worse fashion. Thomas and his wife Virginia (Alison Wright) prepare for the hearing with a short meeting in the only private place left in the Capitol—a bathroom. And yes, Kerry Washington has to say “Long Dong Silver.”

It’s this last, though, that cuts through some of the cheese. “Confirmation” is a bit indulgent, as many made-for-TV films are. The words “Long Dong Silver,” in the mouth of another actor, would be (and are, in the film) delivered with a derisive snarl or a note of the ridiculous. In Washington’s delivery, it is poised and pained horror—an uncomfortable, long-buried memory, dragged out to become public ridicule. Opposite Greg Kinnear’s Senator Joe Biden—the ineffectual chair of the Judiciary Committee, whose balding pate and hangdog look practically summons the “Benny Hill” theme—Washington’s Anita Hill is a stalwart bastion of compassion, the grave human center of the circus.

Biden—now Vice President Biden, of course—is the film’s villain, if there is a villain at all. It’s a bit of a shock, because bumbling ol’ Biden has become a kind of liberal mascot, both adorably ineffectual and predictably loyal. But before ascending to the glorified retirement of the vice presidency, the Anita Hill hearings always dogged him. In “Strange Justice,” a history of the Clarence Thomas confirmation process written by Jill Abramson and Jane Mayer, he acknowledges that he acted “in fairness to Thomas, which in retrospect he didn’t deserve.” Kate Phillips observed in 2008 that when then-candidate Barack Obama criticized the appointment of Justice Thomas, it brought renewed scrutiny to his running mate’s handling of the situation.

So does “Confirmation.” To my mind, Biden—at least in the way he’s portrayed in “Confirmation”—is the classic hypocrite who chirps, perhaps apocryphally, that “you gotta hear both sides.” It’s a reading that willfully ignores power imbalance. But if “Confirmation” makes clear that Biden erred, it also makes clear from the moment he gets wind of Hill’s story, he’s in over his head. The judiciary committee is comprised of 14 white men, facing down first one petite black woman and then a lone black man. Who could possibly be less qualified to weigh in on the issue of “a high-tech lynching,” or on why a woman would not report years-long harassment from her employer?

The Thomas confirmation hearings existed in a weird extra-judicial space where they were not a trial, but felt like one; only instead of a jury making a decision, it was the far less reliable pool of 100 senators, casting each aye or nay vote. Thomas has the backing of the Bush administration and the united front of the Republican party. Politically, Biden, as the Democrat chair, could have been on Hill’s side (or at least, not on Thomas’ side), but he opted to play judge.

That left Hill alone, and “Confirmation” is careful to depict her that way, bolstered by occasional friends and lieutenants but otherwise very much the single career woman, facing classrooms and press conferences and the judiciary committee with the same level gaze. It weighs on the viewer’s conscience. Two of her friends, watching her speak, deliver a concise appraisal of what it means to be female and under scrutiny: One says, "You think she should be more emotional?" The other replies: “If she were, you’d be saying, ‘She should be less emotional.’”

“Confirmation” watches as Biden kowtows to the Bush administration’s demands that Thomas get the chance to testify to the hearing first, despite that flying in the face of common sense; he quashes a second accuser, Angela Wright (Jennifer Hudson), because he can’t bear to have the story continue to unfold. Biden is depicted as troubled by the tenor of the conversation, and assailed, in some way, by growing public frustration with the once-hallowed halls of government. In Kinnear’s hands, as the official calling the shots, he’s less malicious than desperately impotent—in a way that could be hilarious, if the stakes weren’t so high, if it weren’t so eerily close to home. His demeanor in “Confirmation” is of a man slowly realizing the extent of the moral bankruptcy of government.

So in order to cope with it, he chooses to uphold the integrity of the status quo, no matter how sexist, flawed, or inclusive of abuse it is. And more than now-Justice Thomas' brooding, mysterious silence, it’s this ducking of the issue at hand that feels like the worst injustice. The decision to end the hearings felt unsavory at the time; it has done nothing but molder in hindsight. It feels like something important was snatched away from the American public; even the lukewarm comfort of a trial with a verdict is denied.

The film, like the hearings, ends somewhat anticlimactically, with a sense that the quashed proceedings paved the way for Democratic victories and a huge influx of female politicians in the 1992 cycle. Above all is a grand sense of a missed opportunity; for an overturned nomination, or more nebulously, for change, yes. But even an acknowledgement of sexual harassment, and what it means, by the highest authorities in the world, would have maybe been a start.