"When Csanad came in for Yom Kippur, people walked out": The remarkable transformation of an anti-Semite extremist who didn't know he was Jewish

Salon talks to Csanad Szegedi and his rabbi about atonement, extremism and the new documentary "Keep Quiet" 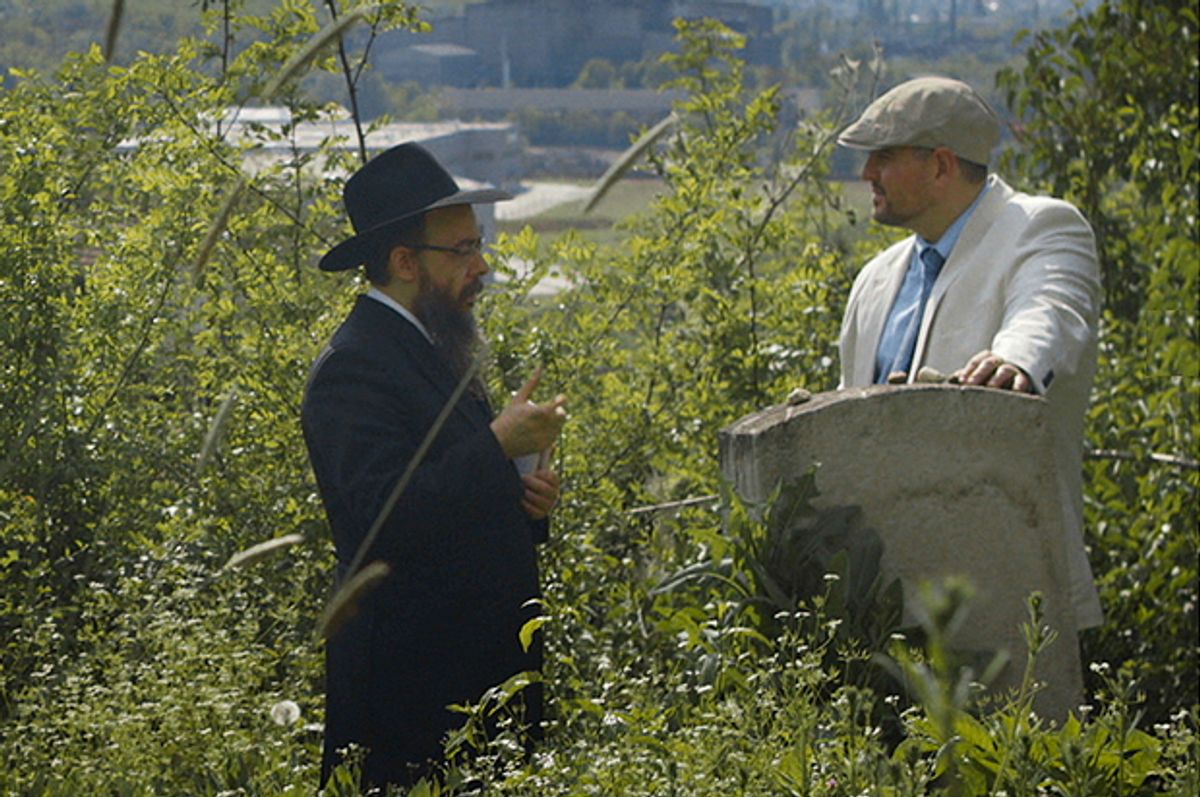 Csanad Szegedi is a former right-wing extremist, who rose to power in Hungary and helped found the Hungarian Guard. He eventually became second-in-command of the Jobbik party—even getting a seat in European Parliament. Then, it was revealed his grandmother was Jewish, and a survivor of Auschwitz. Szegedi made an about-face; he embraced his Jewish roots. He started learning about Judaism, and was even circumcised. He started atoning for his sins, hoping to find support with the Jewish people he once hated.

While Rabbi Boruch Oberlander assists Szegedi in his efforts, giving the former anti-Semite a chance to repent and do penance, others are less inclined to support Szegedi’s efforts, doubting the sincerity of his transformation.

The new documentary, “Keep Quiet” by Joseph Martin and Sam Blair, which makes its world premiere at the Tribeca Film Festival, chronicles Szegedi’s story, and his experiences reinventing his identity and searching for belonging.

Szegedi and Rabi Oberlander spoke with Salon about this remarkable transformation.

Csanad, many people doubt the credibility of your transformation. Why is it difficult to believe a man like you can undergo extreme change?

Szegedi: This transformation has a certain depth and time span [3 years]. The depth and profoundness of this transformation is too big for such a short time span. I don't know what people think, but this change has been big and that comes out of the film. Many people may think I started something and I completed it but in fact, I have only just started on this path.

Why did you want to make this film that chronicles your experiences? How did the project come about? Did you feel it was a way to convince folks?

Szegedi: Everybody can doubt, and they are free to doubt, and I don't want to convince anyone. I've started a process in my life and many people find it interesting. A lot of people told me my change may inspire other people. Many people came to me because they wanted to make a film, but I didn't want a Hungarian production because I wanted objectivity. I don't think the film should reflect a political side, and the filmmakers guaranteed objectivity, which is why I agreed to make this film.

It seems you were susceptible to anti-Semitism when you were young, that you needed a cause and you found Jobbik. What was the appeal of that group?

Szegedi: When I was a student at university, I went to live in Budapest. I grew up in the countryside. In those days, I had a conservative right-wing way of thinking. At university, I met the other young people with whom I made this party, Jobbik. These friends grew to include more people, and as more people with these extreme-right views joined us, Jobbik became more and more extreme right. I was young, in my 20s, and we could continuously identify with these ideas.

I was receptive to anti-Semitism as well. The roots of anti-Semitism is a complex question--if I think about why I was open to these thoughts, it was because I had never met any Jews before and therefore I could believe all the stereotypes of these people. I read a lot of extreme-right books that were written before the war. I saw propagandistic films.

Before the change of regime in 1989, you couldn't talk about anti-Semitism, and after the regime change, people started to talk about taboo subjects. I was 8 years old in those days, and later, in politics and society, these extreme wright ideologies got stronger--the skinhead movement was started, a lot of ex-Nazis emigrated and financially supported these extreme right movements in Hungary.

It’s often the case that people fear who or what they don’t know. Given your experiences in the Jobbik party, have you changed your mind about hatred towards other minority targets like Roma gypsies?

Szegedi: Of course, its a long process. As I'm getting to know Judaism, my view of the whole world is changing. I got into the situation where I was extreme right. It turned out that my mother is Jewish, my grandmother is Jewish. I am Jewish. So I can't hate Jewish people. But it could also have been the case that I would have been a Roma gypsy, or some other minority. Judaism teaches everyone tolerance towards everyone. Yes, I can say it's true that if I want to understand a certain minority, I need to meet them and get to know them. I went to see Roma people in Hungary, so I could understand them.

You talk about symbols being used to represent the right wing party in Hungary. Judaism (like every religion) has rituals and symbols. Do you feel you traded one set of meanings in for another?

Szegedi: When I belonged to Jobbik, I didn't wear a kippa and I didn't light Hannukah candles. Putting aside that joke, it's a change in lifestyle. When I belonged to Jobbik, I used to have a shop selling nationalist symbols on t-shirts. I closed the shop when this change started and then I destroyed all the products. I haven't opened a shop with Jewish symbols yet, but...Of course, we think of symbols, I now put on tefillin and wear a kippa...

Your Grandmother tells you to “keep quiet” about being Jewish; that she feels there will always be people against the Jews. You had your Judaism announced publicly. And you have not “kept quiet” about it, making this film. Do you feel this was the best option in your situation? Rabbi Oberlander tell you that if you are wrong, admit it. You have. But you still face many battles…

Szegedi: I asked my grandmother how a Hungarian Jewish person can experience being Jewish. My grandmother answered was the only choice was to "keep quiet." I can understand her because she was a Holocaust survivor, and for her survival, she had to keep quiet. But I didn't obey my grandmother when I was a child, and in this case, I don't obey her either.

You give a speech, seen in the film, likening Judaism to a flower. Did you you apply the same kind of rhetoric you did in Jobbik to Judaism?

Szegedi: The idea of Judaism as a flower, it a message for Jewish people, talking about the future. Many people associate Judaism with old and dry laws, and the Holocaust. But with this metaphor, Judaism for me is useful, pleasant, and fills me with good feelings. The Jewish people have to get rid of their fears so they see the positive things and they need to dare to look at the world through their Judaism. I used my talent as a speaker giving lectures to young people at schools in Hungary and I speak against hatred and anti-Semitism. Its part of the institution of teshuva, if you make a mistake, you have to restore it as you can. You talk as long as you are listened to.

Rabbi Oberlander, your first reaction to being approached by Csanad was “What am I supposed to tell him?” How did you find the strength or even courage, to accept Csanad and help him embrace his Judaism?

Oberlander: I had just finished studying the question as an abstract question, I wrote a long responsum about this question in Jewish law, that I got the call he wants to meet. I thought it was a bad joke. I learned from the Lubavitch Rebbe that he was a strong believer. He believed in God, but also that he strongly believed in man--that people have the ability to change and the strength to do it if they really want to. That's what I tried to apply. It was not an easy decision. I had many sleepless nights, but I still believe I didn't make a mistake.

What can you say about the Jewish traditions of tikkun olam, or communal social responsibility? The word means fixing/rectification. I see this case being an extreme but plausible example of that.

Oberlander: Responsibility means that a person has to act on his convictions. They have to be able to decide and be able to do what is right. But they also have to act when they realize they were wrong. This is a special strength that God gave us. Changing can mean 5 or 10 degrees, or 180 degrees. It's not simple. I saw how hard it is. But if you are committed, and need some help... I sat with Csanad for 2 hours every Friday, and he is not at the end of his journey. He is doing well, and with God's help, I think he will do even better.

There is concern that Csanad is not sincere in his beliefs. Are you worried that if he renounces his Judaism, that will reflect badly on you as a Rabbi? How much responsibility to you feel towards Csanad?

Oberlander: A Rabbi should never work based on what's good for public relations. A Rabbi has to live with his convictions. If it's not popular, it's not popular. When Csanad came in for Yom Kippur, people walked out. His presence was not popular with a lot of people, even between the Rabbis. A Lubavitch Rebbe once told me you have to love every Jew--the most wicked Jew the same as the most devout Jew. With Csanad, I found the most wicked Jew. You have to love everyone and give everyone the chance to change.