Hillary Clinton is lying about the criminal U.S.-backed coup in Honduras. It should be as scandalous as Libya

The U.S., under Clinton's leadership, helped overthrow Honduras' elected government. Today the country is in chaos 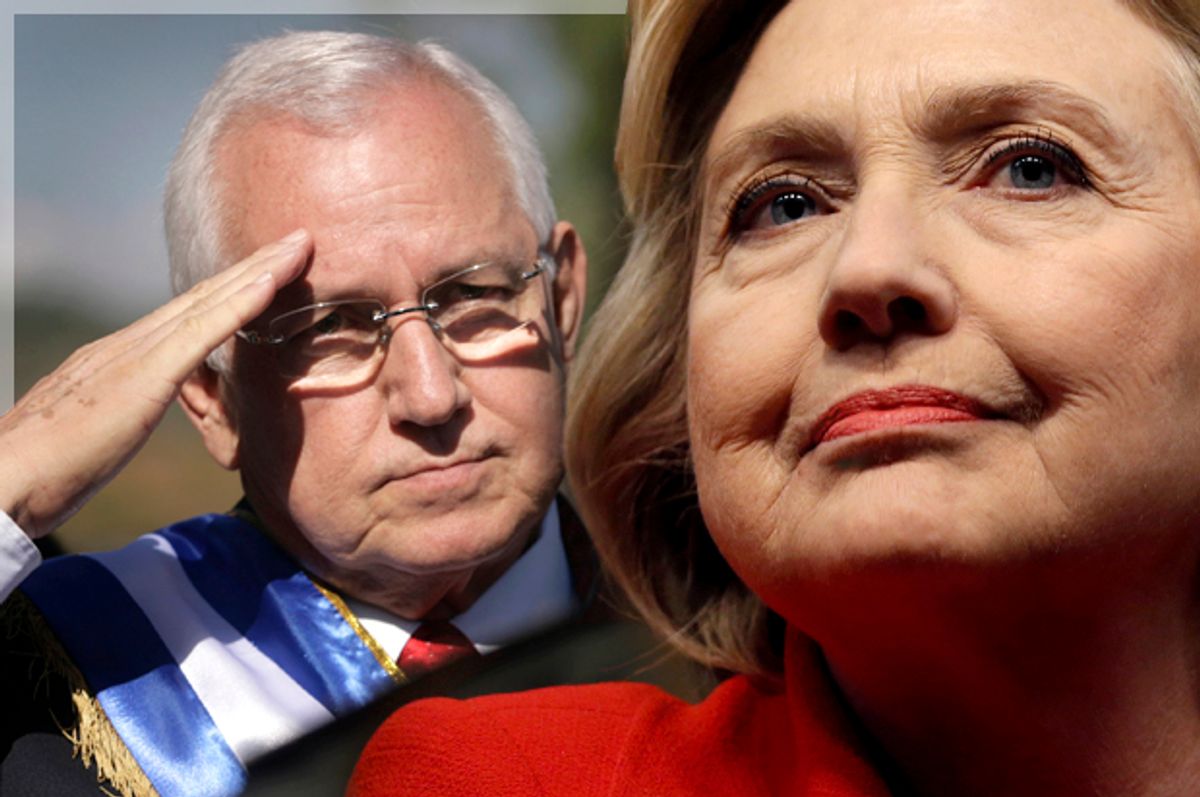 Hillary Clinton may have foreign policy experience, but it is experience comprised of disaster after disaster.

In an interview with the New York Daily News, journalist Juan González dug a skeleton out of Clinton's closet: He asked the presidential candidate about her role in the coup in Honduras.

In 2009, the Honduran military overthrew the democratically elected government of President Manuel Zelaya. The populist left-wing leader was woken up in the middle of the night, kidnapped and whisked away from his own country.

The international community immediately condemned the coup. The U.S. response was quite different. The Obama administration, and particularly the State Department under the leadership of Hillary Clinton, defended the coup.

Clinton, a committed hawk and firm believer in U.S. empire, played a uniquely hands-on role in the coup, just as she did in the equally disastrous war in Libya.

Emails released from Clinton's time as the secretary of state show that some of her top aides urged her to dub the putsch a military coup and to cut off U.S. aid. She refused to do so.

Instead, the U.S. defied the Organization of American States and pushed for the world to recognize the coup government.

Zelaya, a left-wing leader who challenged the interests of Western corporations, was never reinstated. In 2013, current President Juan Orlando Hernández kicked off his reign with the slogan “Honduras is open for business.”

Today, Honduras has a violent, repressive and incredibly corrupt government. Renowned activists like environmentalist Berta Cáceres are murdered in cold blood, and with complete impunity. Just before her assassination, in fact, Cáceres singled out Hillary Clinton for her role the coup.

Honduras soon earned a dubious honor: From 2012 to 2014, it was the murder capital of the world.

Activists say death squads are back — a chilling ghost from a bloody Cold War past.

Clinton has responded to this tragedy — described in a New York Times op-ed as "a mess made in the U.S." — with whitewashing and sheer fabrication.

"I didn’t like the way it looked or the way they did it, but they had a very strong argument that they had followed the Constitution and the legal precedents," Clinton said of the 2009 coup in her interview with the Daily News.

"I think we came out with a solution that did hold new elections, but it did not in any way address the structural, systemic problems in that society," she added, expressing "concern that it’s not just government actions — drug gangs, traffickers of all kinds are preying on the people of Honduras."

Experts disagree, and say Clinton is trying to rewrite history.

Clinton's "emails show that early on in the 2009 coup against Manuel Zalaya, when there was a real chance of restoring the reformist president to his office, she was working with the most retrograde elements in Honduras to consolidate the putsch," explained historian Greg Grandin, an expert on U.S. policy in Latin America.

"Let's be clear," Grandin told journalist Doug Henwood for his book "My Turn: Hillary Clinton Targets the Presidency," "grassroots Democrats who support Clinton for president would be enormously sympathetic to the coalition that was trying to reverse the Honduras coup, comprised of environmentalists, LGBT activists, people trying to make the morning-after pill available, progressive religious folks, anti-mining and anti-biofuel peasants and legal reformers working to humanize Honduras' lethal police-prison regime."

"Clinton betrayed them, serving them up to Honduras' crime-ridden oligarchy," Grandin added.

"Hundreds of good people have since been murdered by the people Clinton sided with in late 2009 and early 2010."

Scholar Dana Frank, a specialist on human rights and U.S. policy in Honduras, was equally critical in her response.

"This is breathtaking that she’d say these things. I think we’re all kind of reeling that she would both defend the coup and defend her own role in supporting its stabilization in the aftermath," Frank said in an interview on Democracy Now.

She explained that the argument that the Honduras judiciary and Congress justified the coup legally is a "mind-boggling" lie.

"The fact that she then is going to say that it was not an unconstitutional coup is incredible," Frank continued, drawing attention to a July 2009 cable written by U.S. Ambassador to Honduras Hugo Llorens that very clearly called the coup "illegal and unconstitutional."

Amb. Llorens wrote in the cable, which was sent to Washington, D.C. less than a month after the June 28 coup and was later released by WikiLeaks, that "there is no doubt" that it "constituted an illegal and unconstitutional coup."

Characterizing the Honduran military's kidnapping of the president as an "abduction," the embassy document systematically debunked the arguments put forward by those who claimed the coup was legal, flatly asserting that none "has any substantive validity under the Honduran constitution."

This did not, however, stop Clinton from declaring in her memoir "Hard Choices" that the events in Honduras were a "victory for democracy."

The effects of the coup, meanwhile, have been nothing short of devastating. It "opened the door to this almost complete destruction of the rule of law in Honduras," Frank explained.

"People hear the gangs and violence and drug traffickers are taking over," she continued, recalling Clinton's comments. "Well, that’s because the post-coup governments, both of [Roberto] Micheletti, [Pepe] Lobo and now Juan Orlando Hernández, have completely destroyed the rule of law, because they’re in cahoots with these various forms of organized crime and drug traffickers and violence against the Honduran people."

"It’s not just like there are randomly violent people down there. This is a U.S.-supported regime."

Today, Clinton is likely aware of how bad this all looks. She went so far as to excise evidence of it from the paperback version of her memoir.

The journalist who posed the questions to Cinton, Juan González, referred to her Honduras policy as “a Latin American crime story.” (This did not stop the Daily News from endorsing Clinton, however — after it grilled her competitor Bernie Sanders.)

Although she played an important leadership role, nevertheless, Clinton is not the only one who bears responsibility for the disaster in Honduras today. President Obama and his administration were also directly complicit.

Now, the Obama administration has been shockingly unsympathetic to the plight of refugees fleeing the violence and repression it helped create.

The U.S. government is deporting refugees from Honduras, along with neighbors El Salvador and Guatemala. Experts say these deportations violate international law.

As in Libya, President Obama made the ultimate decision, but Secretary of State Clinton played a forceful leading role. This is the kind of foreign policy experience she flaunts.