No, a $15 minimum wage won't kill business: The economic reason why the Fight for $15 movement is so important

Critics argue that increasing the minimum wage would hurt economic growth. Here's why they're dead wrong 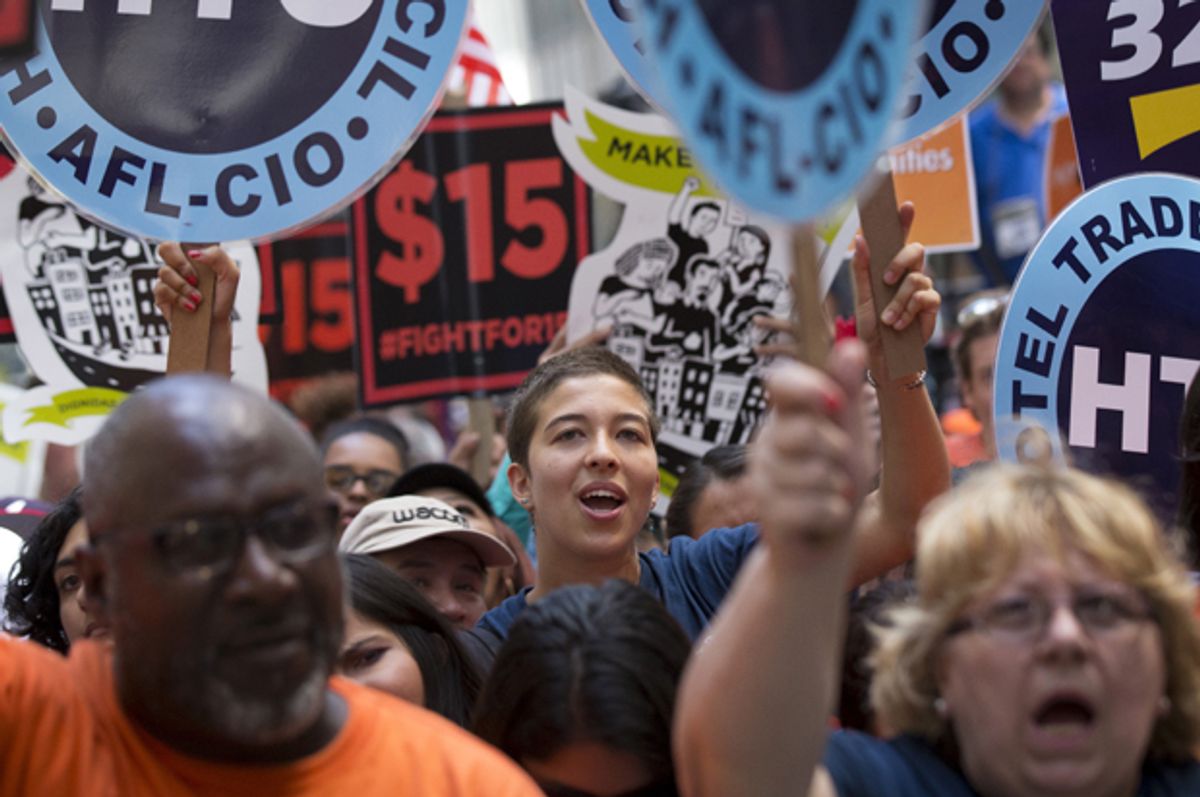 This week’s strikes by the underpaid workers of the Fight for $15 movement come on the heels of their landmark $15 minimum wage victories in California and New York last month. All told, 17 million workers have won raises since the Fight for $15 was launched more than three years ago – and 10 million are now slated to receive raises to $15, cementing that figure as the benchmark for strong national action on wages.

These new $15 minimum wages will raise pay for more than one in three workers in California and New York by about $4,000 a year. That’s enough to begin reversing decades of wage inequality and make a real difference for a waitress or a child care worker who today struggles on just $16,000 a year.

But even as it gains momentum, some liberal-leaning economists have voiced doubts about the $15 minimum wage. However, careful review of the evidence reveals a strong economic case for $15.

Cost-of-living data confirms the workers’ message, that $15 is the minimum they need to live decently. Whether in Buffalo, Bakersfield or Houston, a single worker needs $15 an hour just to cover the basics. It’s true that living costs are even higher in many metro areas – but that just shows that workers in high-cost cities could use even more than $15 – not that $15 by the early 2020s is excessive in lower-cost regions.

What about the impact on employers and hiring? This week Goldman Sachs analysts noted that, “The economic literature has typically found no effect on employment [of recent U.S. minimum wage increases].” This is illustrated by meta-studies that survey the whole field of recent minimum wage research.

But will the same hold true for the new $15 wages that may be higher than past increases studied? For starters, as SEIU chief economist Mark Levinson put it, “The minimum wage debate has been way too focused on underplaying the certain benefit, as opposed to the uncertain possible costs.” As David Howell at the New School persuasively argues, even if it were to slow job growth somewhat, the sweeping benefits of a $15 minimum wage for raising living standards and reversing inequality would be well worth the tradeoff.

Furthermore, when you look carefully it turns out that a $15 minimum wage is not so far outside the range of past U.S. experience. A $15 wage by the early 2020s – which adjusted for inflation is just $13 today – will be a little less than 60 percent of the projected median wage in California and New York. That’s barely higher than the U.S. minimum wage was in the late 1960s, when it was 55 percent of the median wage. And 10 U.S. states, including Vermont, Maine, North Carolina and Florida, had minimums of 60 to 65 percent of median around 1980 – with no evidence that it hurt their labor markets.

What’s more, there is reason to question whether the median wage is the right yardstick for assessing how high a minimum wage can go. First, median wages have been dragged down by decades of eroding pay. And new research shows that for the jobs that are actually affected by the minimum wage, like restaurants, retail and home health care, pay rates actually vary little between high-wage and low-wage regions in a state. Regional differences are caused by metro areas having more high-paying jobs in tech, finance and media – the jobs not affected by the minimum wage. As a result, the impact of a $15 wage on a restaurant or a janitorial company is not as different as you might think between high-wage and low-wage regions.

University of California economists have conducted the most sophisticated research to date on the impact of the new higher minimum wages – research that more than 75 economists have endorsed. It shows that, unlike small wage increases, a $15 minimum wage generates billions in new consumer spending that offsets most of the higher costs to businesses. And because more workers would get a raise in lower-paying rural areas, the consumer spending increase would be greatest there, providing an extra boost to sales at rural businesses. JP Morgan Chase reported last month that spending by low-income consumers and millennials are the main factors currently driving U.S. job growth.

In Seattle, the first major city to adopt a $15 wage, the Puget Sound Business Journal reported, in a front-page story titled “Apocalypse Not: $15 and the Cuts that Never Came,” that Seattle’s restaurant industry has continued to grow and thrive as the $15 wage phases in.

As the $15 movement continues to gain momentum, economists will continue to dig into the impact of these much higher wages. But the best evidence today – both in the research and on the ground – indicates that a phased-in $15 wage is manageable for employers and broadly beneficial for workers and the economy.