No, America isn't insolvent: Inside the idiotic right-wing lie that hijacked Time magazine

The media loves to wax apocalyptic about government spending. We should know better by now 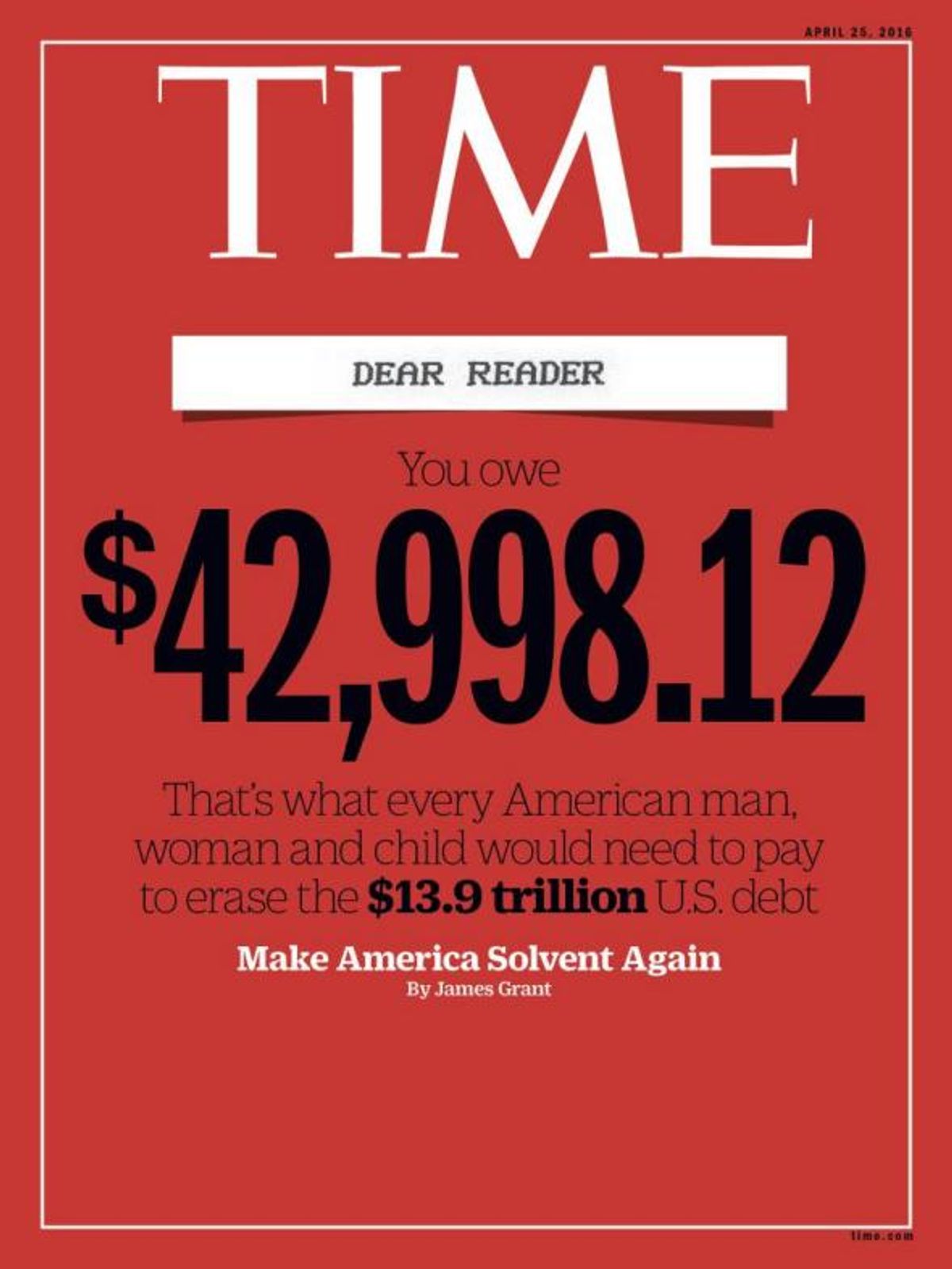 On Thursday, Time magazine released the cover for its upcoming issue, which addresses the so-called debt problem with a cover story by Jim Grant, a libertarian goldbug who has long been warning — along with other right-wingers — about the imminent wave of hyperinflation that will soon overrun America (much to the amusement of Paul Krugman).

“Dear Reader, You Owe $42, 998.12,” screams the headline, which will undoubtedly unnerve plenty of shoppers at the checkout line in the weeks ahead. Yet the cover was instantly scorned by most observers as an irresponsible piece of fear-mongering, and denounced by various economists.

As many commentators have pointed out, the alarmist cover is not only inane and dishonest, but downright dangerous. It plays right into the right-wing scare tactics that have plagued American politics for the past seven years, stifling the economic recovery and holding the government hostage. It’s about as intellectually honest as saying that “Social Security is Bankrupt.”

As Matthew Yglesias notes in his response, the cover ignores many factors, including inequality, government assets, and the economy in general. Slate’s Jordan Weissmann pulled no punches on the covers meaningless statistic: “Stating debt per American tells us nothing whatsoever about whether we have borrowed too much. It is intellectually empty information, a Dorito in stat form.”

Though the statistic may be completely worthless as an economic measure, the Time cover will be invaluable to Republicans like Speaker Paul Ryan (R-Wy) and Sen. Rand Paul (R-Kt), who have made their political careers on scaring voters about the debt — which, of course, tends to be blamed entirely on President Obama and Democrats. Since the day he entered office in 2009, in the midst of the worst economic crisis in eighty years, it seems Republican politicians have managed to convince a large chunk of the American public that Obama invented the debt himself. He has been portrayed as a frivolous spendaholic who just can’t stop giving away free stuff — while noble Republicans like Ryan have been praised in right-wing circles as “fiscally responsible” warriors fighting the debt machine (Rage Against the Debt-Machine?).

Of course, Obama didn’t just inherit a nosediving economy, but a $1.4 trillion deficit from the Bush administration. This massive deficit, which was largely a result of stimulus spending that was enacted to prevent complete economic collapse, has fallen by more than two-thirds over the past seven years.

Thats right, Obama the irresponsible spender has cut the deficit by more than two-thirds.

Moreover, the last president to cut the deficit while in office was not a Republican, but another Democrat, Bill Clinton. In fact, if there is any single president of the modern era who should be scorned for fiscal irresponsibility (and I’m not saying that he should be), it is GOP saint Ronald Reagan, who just about tripled the debt while in office. The last Republican to actually cut the deficit  was Dwight Eisenhower — who, truth be told, would be a centrist Democrat today.

Now, these are just facts, and if the 2016 Republican primaries have shown us anything, it’s that Republicans are not really interested in facts. They are more interested in scaring voters with sensational slogans and fake statistics and untrue anecdotes and, well, distressing Time Magazine covers. (Who wants to bet a GOP congressperson will be waving around Time’s latest issue in the coming weeks.)

As various responses to Time’s cover have pointed out, the public debt is not the disaster that so many Republicans claim it to be, and the federal government is not going to be insolvent anytime soon (as the story’s headline, “Make America Solvent Again,” suggests). Unfortunately, like most political issues, the subject of debt has become entirely immersed in petty partisan politics, and Republicans have managed to cultivate an image of fiscal responsibility by loudly assailing Democrats for defending any kind of spending.

Ultimately, right-wingers are less concerned with the debt than with cutting taxes and shrinking the federal government (except, of course, when it comes to the bloated military budget). The debt hysteria is simply a means to an end. After all, if Republicans were as concerned about the debt as they claim to be, their two presidential frontrunners, Donald Trump and Sen. Ted Cruz (R-Tx), wouldn’t be proposing outrageous tax plans that would increase the federal deficit by $10 trillion over the next decade.

Time magazine has done a great service to the alarmists, all in the name of grabbing headlines and selling a few extra copies. Of course, shoppers who have just learned that they owe over $42,000 may not be willing to shell out five bucks for a magazine.