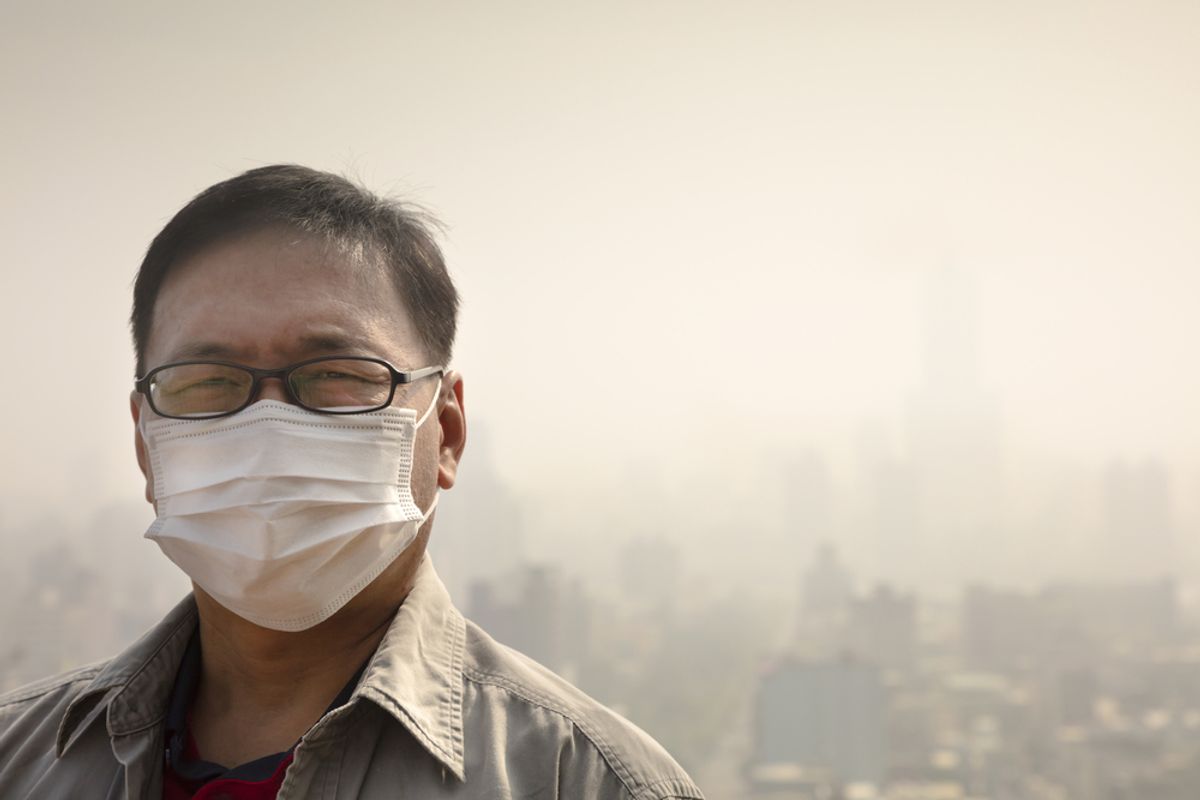 The Obama administration has released a major new report on how manmade global warming is making Americans sicker—and it's only going to get worse.

Developed over three years and involving approximately 100 climate and public health experts, the 332-page report was based on more than 1,800 published scientific studies and new federal research, and was reviewed by the National Academies of Sciences.

The report, titled The Impacts of Climate Change on Human Health in the United States, "significantly advances what we know about the impacts of climate change on public health, and the confidence with which we know it," according to a White House fact sheet about the report.

"As the climate continues to change, the risks to human health will grow, exacerbating existing health threats and creating new public health challenges, and impacting more people in more places," the fact sheet states. "From children to the elderly, every American is vulnerable to the health impacts associated with climate change, now and in the future."

"It's not just about polar bears and melting ice caps," said EPA administrator Gina McCarthy at a White House event unveiling the report. "It's about our families.It's about our future."

Surgeon General Vivek Murthy said that climate change affects more people in more ways than doctors are accustomed to seeing. Noting that the report will help doctors to quantify "the sheer number of pathways through which climate affects health," Murthy called out increased pollen, wildfire and air pollution exacerbated by emissions from power plants as emergent climate change-related threats to public health.

The report projects that by 2030, due to “future ozone-related human health impacts attributable to climate change,” the United States can expect to see hundreds or even thousands of premature deaths, not to mention increases in hospital admissions and cases of acute respiratory illnesses every single year.

The report underscores the particular impact on children. Due to their immature respiratory and immune systems, kids can expect to experience more episodes of asthma and other adverse respiratory effects due to climate change. "Not being able to breathe is one of the most frightening experiences" a person can have, Surgeon General Murthy said. "We're talking about scary moments for parents and children."

An estimated five million children in the U.S. currently suffer from asthma, the most common chronic disease among children, According to the Children’s Hospital of Philadelphia, “asthma is the number one reason that children miss school, go to emergency rooms, and are admitted to hospitals.”

Every spring, flowers bloom and with them, pollen spores are spread throughout the air, increasing allergies. With warming temperatures ushered in by climate change, the pollen season has lengthened, exacerbating the symptoms of hay fever for an estimated 40 million Americans who suffer from allergies, triggering annual healthcare costs of more than $21 billion.

Between 1995 and 2011 in central North America, the ragweed pollen season has increased by as much as 11 to 27 days. That has already had significant impacts on some 6.8 million kids who are susceptible to allergens.

White House science adviser John Holdren underscored the looming threat of increased heat waves, warning that greenhouse gas reductions at this point won't stop fatalities caused by increased temperatures. "We can see thousands to tens of thousands of heat-related deaths in the United States each summer," he warned.

These premature deaths are expected to outpace projected deaths due to extreme cold. The western part of the country, in particular, will experience an increase in both the frequency and intensity of heat waves. Using a 1990 baseline for more than 200 U.S. cities, one model projected an increase of more than 11,000 additional deaths during the summer in 2030, rising to 27,000 more deaths by the summer of 2100.

Between 2001 and 2014, both the distribution and the number of reported cases of Lyme disease increased in the Northeast and Upper Midwest. The number is set to increase as warmer temperatures impact both the winter and spring months, leading to an earlier annual onset of the Borrelia bacteria that causes the disease. Research indicates that the geographical distribution of ticks carrying the bacteria is “expected to expand to higher latitudes and elevations in the future.”

The annual incidence of Lyme disease is calculated as the number of new cases per 100,000 people. The graph is based on cases that local and state health departments report to CDC's national disease tracking system. (image: EPA; data: CDC 2015)

The nation’s waterways will be increasingly compromised as more frequent and intense precipitation leads to runoff from human and animal waste and agricultural activities, including the use of fertilizers. This increased runoff will contaminate more water, thereby increasing human and animal exposure to water-related illnesses through contaminated drinking water and recreational water, as well as fish and shellfish harvested in contaminated water.

Rising temperature and increased flooding, toxic runoff and drought will lead to increases in both the occurrence and transport of pathogens in agricultural environments, which in turn will increase food contamination risk and human exposure to certain pathogens and toxins.

The report specifically highlights an increased risk of ciguatera fish poisoning(CFP), a foodborne illness caused by eating fish contaminated with toxins produced by dinoflagellates, a type of aquatic microorganism. “There is a well-established link between warm sea surface temperatures and increased occurrence of CFP,” the report states, “and thus concern that global ocean warming will affect the risk of illness.”

There is also the issue of lowered nutritional value for some foods, as rising levels of atmospheric carbon dioxide can lower the nutritional value of most food crops. A 2014 study in the journal Nature found that increased C02 levels led to significant reductions in zinc, iron and protein in rice, wheat, soybeans and field peas.

7. The largest health impact will be on vulnerable populations.

The report warns that climate change will have the largest health impact on vulnerable populations, including “those with low incomes, some communities of color, limited English proficiency and immigrant groups, Indigenous peoples, children, pregnant women, older adults, vulnerable occupational groups, persons with disabilities, and persons with preexisting or chronic medical conditions.”

The report underscores the increased lack of potable water for certain vulnerable populations:

Lack of consistent access to potable drinking water and inequities in exposure to contaminated water disproportionately affects the following populations: tribes and Alaska Natives, especially those in remote reservations or villages; residents of low-income rural subdivisions known as colonias along the U.S.-Mexico border; migrant farm workers; the homeless; and low-income communities not served by public water utilities—which can be urban, suburban, or rural, and some of which are predominately Hispanic or Latino and black or African American communities in certain regions of the country. In general, the heightened vulnerability of these populations primarily results from unequal access to adequate water and sewer infrastructure, and various environmental, political, economic, and social factors jointly create these disparities.

The report points out that extreme weather and other events related to climate change will impact health by “disrupting infrastructure, including power, water, transportation, and communication systems, that are essential to maintaining access to health care and emergency response services and safeguarding human health.”

Challenges to public health infrastructure and health care could include inadequate resources for monitoring and surveillance systems, research on health risks of climate change, management approaches, training of health care professionals and practitioners and technology development and deployment.

The effects of global climate change on mental health and well-being are integral parts of the overall climate-related human health impacts. Mental health consequences of climate change range from minimal stress and distress symptoms to clinical disorders, such as anxiety, depression, post-traumatic stress, and suicidal thoughts. Other consequences include effects on the everyday life, perceptions, and experiences of individuals and communities attempting to understand and respond appropriately to climate change and its implications. ...

This figure provides 10-year estimates of fatalities related to extreme events from 2004 to 2013, as well as estimated economic damages from 58 weather and climate disaster events with losses exceeding $1 billion. These statistics are indicative of the human and economic costs of extreme weather events over this time period. Climate change will alter the frequency, intensity, and geographic distribution of some of these extremes, which has consequences for exposure to health risks from extreme events. (text and image: GlobalChange.gov)

Preparation for the future are in the works, but will it be enough?

While the report paints a bleak picture of the future health of American citizens, it also provides an opportunity and impetus to combat the threats posed by climate change. The Obama administration announced the following actions that respond to the challenges outlined by the Climate and Health Assessment:

While these are important initiatives, Howard Frumkin, dean of the University of Washington's public health school, who wasn't part of the report, said the government isn’t doing enough. "The report clearly establishes that climate change is a major threat to public health in the United States,” he said, but "there is a vast disconnect between the magnitude of the problem, as outlined by this report, and the response of government health agencies."