Conservatives have wrecked the UK: American voters must take heed and realize Bernie can save the US from similar fate 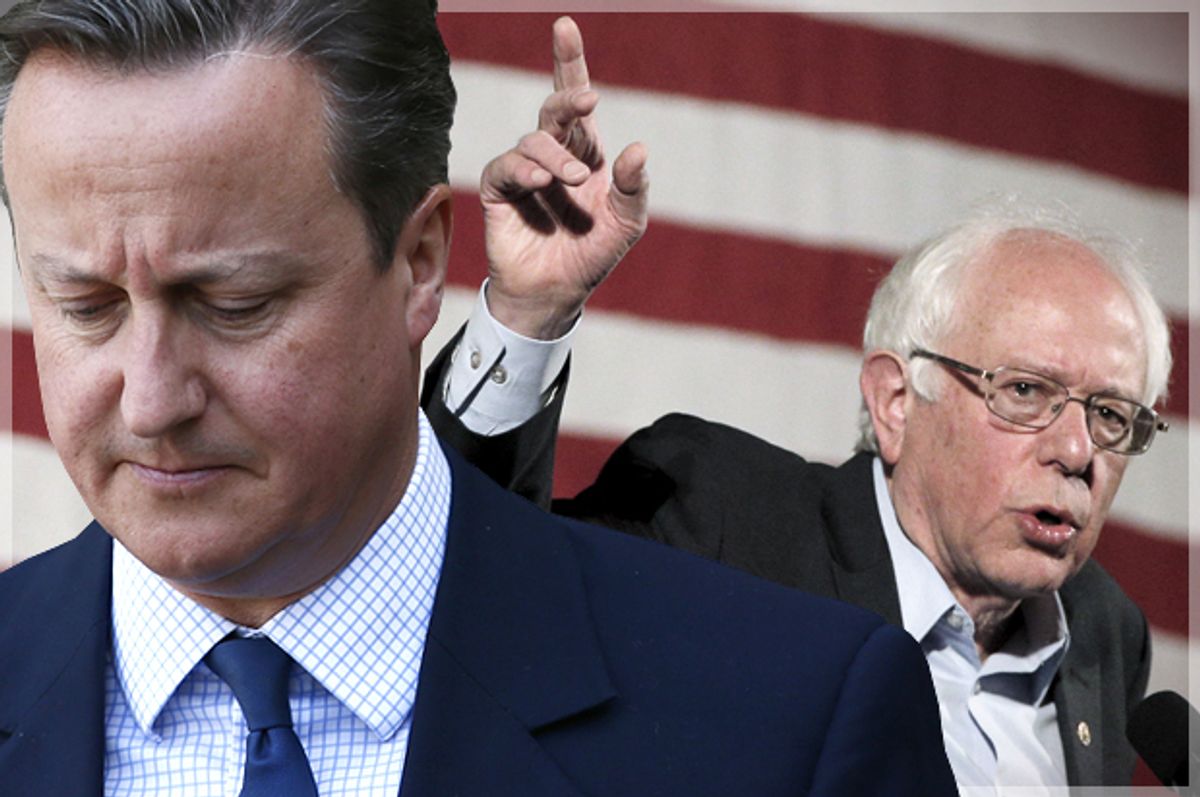 It’s hard as a British progressive to look across the pond right now and not feel a pang of jealousy. In the Democratic primary – the only one that matters, if you’re to believe polls about the (un)electability of the GOP candidates – you have two options: the "pragmatic" Hillary Clinton, or "populist prophet" Bernie Sanders. Both are intelligent, passionate speakers with years of experience under their belts and distinct policy proposals. Where one promises incremental change, retaining relative stability at an uncertain time, the other offers a “political revolution” and the rapid transformation of a nation.

What we in the U.K. wouldn't have given to have had choice like this at our last election. Instead, we were offered austerity (the Conservative party); austerity lite (Labour); preservation of the status quo, which was austerity (the Liberal Democrats); and austerity with a heavy dose of bigotry (UKIP, led by our very own bargain basement Trump, Nigel Farage). With many British voters left deflated by the lack of political variety, turnout was down. Taking advantage of the general apathy, David Cameron’s Conservatives managed to secure another five years in power while ditching former partners-in-government the Lib Dems.

Now free of the shackles of coalition, David Cameron and his Tories have unleashed their full-fat interpretation of modern conservatism on Britain. It means gerrymandering and cutting opposition funding, making it even harder for an already unstable opposition to win future elections. It means crippling our greatest institutions – the NHS, the BBC, our education system – in order to justify sweeping privatization. It means legitimizing a “money-laundering economy.” It means homelessness and poverty up as income inequality skyrockets; it means the disabled dying and veterans sleeping on the streets because of 'austerity' measures (austerity, of course, endorsed by no serious economist). It means going easy on corporations as the national debt increases by over 50% and some are forced to get their food from charity ‘food banks.’

In his book "Capital in the Twenty-First Century," the award-winning economist Thomas Piketty writes that “wealth is so concentrated that a large section of society is unaware of its existence.” And by “concentrated,” Piketty means that the richest 62 people on Earth now have as much money as half of the world’s population; that the gap between the super-rich and the rest has continued to swell even as the world recovered from recession. In the U.K., we feel the divide growing even if we can’t always explain it. As one small group’s wealth inflates, most individuals’ finances remain in virtual stasis, with many failing to see significant change in their pay packets despite head-scratching assurances that the economy is growing.

One positive of the Mossack Fonseca scandal is that it’s highlighted in dramatic fashion how piles of taxable cash are kept off-limits to regular working men and women. The Panama Papers have revealed that, as our leaders have been insisting money’s tight, a privileged few – including heads of state and global institutions – have been avoiding paying a share into society. In Britain, as childhood poverty rose to dangerous levels, the Tories cut corporation tax and made sweetheart deals with the likes of Google and Amazon – even after promising to stamp out tax avoidance. Now we know the Conservative party, including our own Prime Minister and Chancellor of the Exchequer, have been benefitting from this system that keeps the rich rich and the rest struggling.

This is how establishment politics currently looks in the U.K. This, regrettably, is the new status quo. Across the Atlantic, figures show the ‘norm’ isn’t much different from ours: poverty up, homelessness levels flat, wages stagnating – all as the economy grows. In the U.S, the status quo means growing economic disparity. And to Glenn Greenwald, the Intercept founder and former Salon journalist who broke the Snowden story for the Guardian, Hillary Clinton is the “ultimate guardian” of the Stateside status quo.

Whether Clinton would continue to be a “guardian” of this system as POTUS is uncertain. To her credit, the former secretary of state has promised to make some real changes when she’s in charge. One potential problem is that Clinton, like our Tories, benefits from and is indeed part of the very system that she promises to now get tough on.

There are many political areas in which Clinton could charitably be called compromised. Though Hillary stands with workers, such as those working for corporations like Verizon, she also accepts money from the owners (or sits on the board of directors, as she did for Wal-Mart). She promises to be good for the environment, even though she “sold fracking to the world” and, yes, accepts fossil fuel donations. She wants campaign finance reform, even though the system currently in place made her campaign flush with cash. (Plus, analysis shows her reform plan doesn’t do nearly enough.) Perhaps most disturbingly, though Hillary is deemed best for the job, out of her and Bernie Sanders, in terms of foreign policy, she once called Iraq a “business opportunity” for corporations and was the facilitator of suspect arms deals with the likes of Saudi Arabia and Qatar whilst Secretary of State.

Then there’s the problem of Wall Street. Though she has vowed to be iron-willed so that Wall Street can again bring “prosperity to Main Street,” Clinton’s presidential campaign took $44 million in contributions from Wall Street firms last year, while together she and husband Bill have made $153 million giving speeches there. As anyone who’s been paying attention during this election knows, Hillary also accepts large sums of money from Goldman Sachs, the firm that helped engineer the ’08 financial crisis. (We’ll probably never see the transcripts for Clinton’s $225,000 Goldman speeches, but one attendee says they would “bury her” against Sanders.) There’s nothing illegal about accepting money to fund your campaign, but big contributions like these are typically meant for one thing: buying influence.

If you believe that Hillary Clinton will, as president, in fact suddenly turn her back on those individuals and institutions that put her in the position she’s in today, and that made her as personally wealthy as she is, then by all means go ahead and give her your vote. If you think that someone who uses her own charity to “launder money and enrich family friends” is going to start breaking down the crony capitalist system, then Clinton might be the candidate for you. If you’re a Democratic voter whose state has yet to vote and you’re concerned about Clinton’s position, however, don’t panic: there’s still one other candidate. Though his time is running out.

For Bernie Sanders, Tuesday's New York primary is sink or swim time. This is his literal home state, and he’s looking for a win not just so he can continue chipping away at Clinton’s pledged delegate lead, but so he can finally prove to doubters that he’s a big state contender. He needs to prove his spiel is resonating with a diverse group of voters.

I've been criticized for writing that Sanders supporters have every right to say Bernie or Bust if that's their decision (I’d argue that if people find enough reasons not to trust a candidate, then that's the fault of the candidate, not the voter). However, I'd say it's pretty obvious that if it comes down to Clinton and Trump or Clinton and Cruz in November, Hillary Clinton would be the smart choice. Obviously, President Clinton would still be far better than President Trump or President Cruz, twin harbingers of the GOP's apocalypse, and potentially America's if they were to ever get into power. But right now, there's still one more option.

Refreshingly in this day and age, Bernie Sanders appears beholden to nobody. With a campaign financed almost entirely by voters, he’s a candidate completely untouched by the big money that has been buying the system, and that in turn is exacerbating inequality and beginning to ossify progress in both Britain and America. When someone like that promises to at last make changes to level out the playing field, it’s easy to get excited. To outsiders at least, Sanders looks like the dream candidate – clearly, as he won the Democrats Abroad contest handily, beating Hillary Clinton 69% to 30% among American voters not living in the United States.

Often it’s reiterated that Hillary Clinton is the realist’s candidate, but there’s a pragmatic argument for voting Bernie Sanders as well. Clinton has marketed herself as a progressive “who likes to get things done,” but Sanders hasn’t been idle during his time in politics. In 2015, Rolling Stone crowned him “the amendment king,” while GovTrack has Sanders down as one of the busiest and most successful senators in Congress. Sanders’ supporters aren’t just dreamers or doped-up beatniks, either, but rare intellectuals like Naomi Klein, Steve Wozniak, Noam Chomsky, Ta-Nehisi Coates and Thomas Piketty. There’s Senator Jeff Merkley, who wrote of his decision to endorse Sanders: “We need urgency. We need big ideas. We need to rethink the status quo.”

Of course, there is concern that Sanders’ plans are too ambitious, and the experts continue to debate whether he could make everything work. Some say his economic plan is “voodoo,” while others venture that it could significantly boost the economy. Some argue his proposed tuition-free public college plan would be impossible to realize while others say it’s perfectly workable. Some call his universal health care proposals a “train wreck” while others call it simply practical. There are arguments for and against Sanders’ plan to break up the big banks, his plan to raise the minimum wage, and his plan to tackle climate change.

It really depends on which of the experts you’re inclined to trust. It’s hard as a British citizen, though, not to think it’s smart to take a chance on Bernie Sanders and hope that the experts that see sense in his proposals are right. Here in the U.K., we feel now more than ever that money has infiltrated politics to its detriment. We won't get another opportunity to change that for some time. But if you’re a Democratic voter waiting to cast your ballot, you still have the chance to vote for change. Christopher Cook of The Atlantic argues that “political and social change emanate from persistent pressure…not settling for what is deemed 'realistic' before getting to the negotiating table.” Throughout this campaign, while Hillary Clinton has often sounded like someone who’s simply resigned themselves to defeat, Bernie Sanders has at least made a promise to try and rectify this unsustainable status quo. Hell, that’s far better than we were ever offered in our last election.