Let's thank Donald Trump: The Ivy League, the 1 percent and the education horror brought forward by his racist campaign

His overt hate, at least, has made it possible to talk about toxic dog-whistle politics -- especially in education 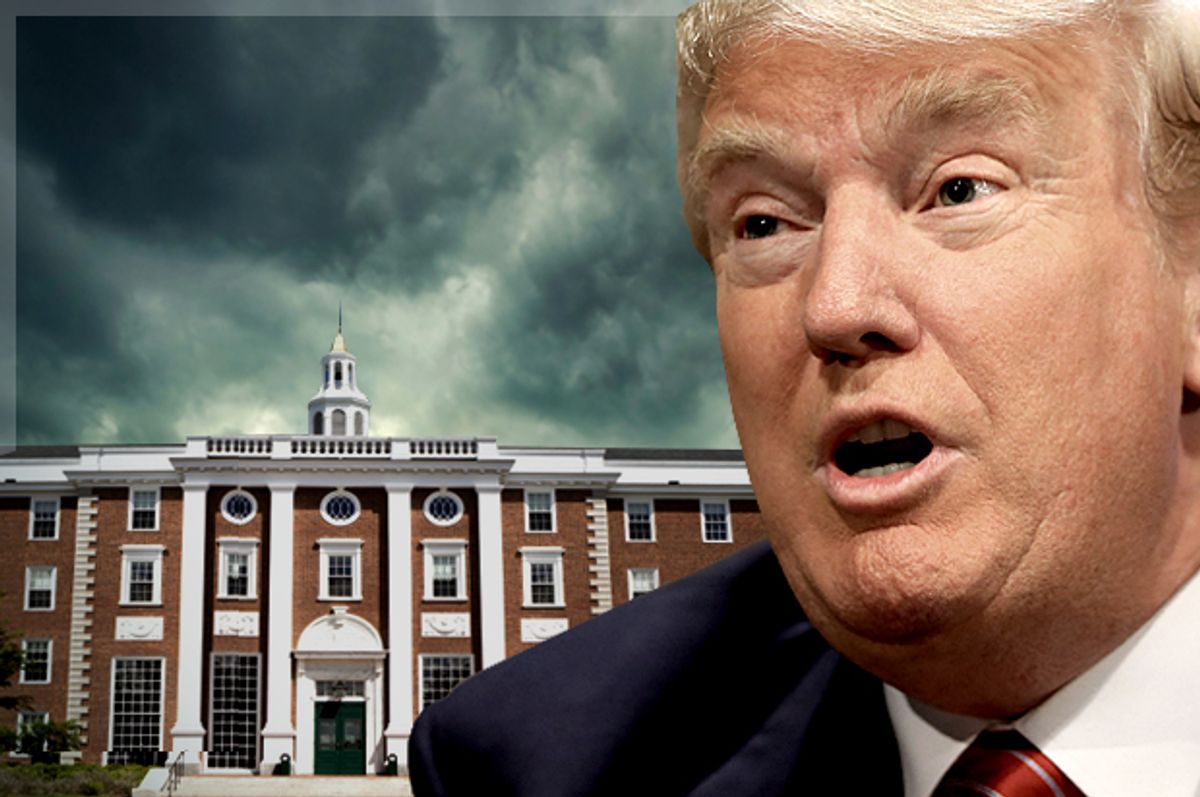 The clear racism fueling Donald Trump’s presidential campaign, no longer talked about only in hushed tones on the far left, has opened discussion of other impacts of racism. We are finally able to talk about the toxic impact of dog-whistle politics in a number of areas of public policy — not the least being education.

The decline of American urban public universities is collateral damage from recent right-wing and neo-liberal dominance of U.S. state governments. Before the rise of Trump, it would have been difficult to say this without raising a chorus of indignation: Much of the harm to our urban colleges and universities has been made possible by political success through subliminal racist messages. Money for education disappears to appease racist suburban and rural constituencies.

Because this drying up of funds disproportionately affects urban colleges, it exacerbates differences in value between types of college degrees available to different classes of people. The upper classes still have their Harvards and Oberlins with small classes and individual attention where technology is an aid to education and not its center — and where the personal connections made are often the cornerstones of successful careers. The prestige public universities, though also under attack, have other resources allowing them to maintain at least an approximation the quality of the education they’ve long offered, providing a reasonable continuation of the strong foundations they have been providing the American middle class for generations.

The schools hurting the most are the urban, non-residential colleges and universities that cannot expect much in the way of tuition, have minimal endowment and attract little in the way of research funding but that provide the prime educational venues for poor and minority students looking to improve their future prospects.

Less willing than ever to invest in the poor, state governments are finding any number of excuses for pulling back funding from these schools. They are making the claim that cut-rate education can be as effective as top-dollar programs, arguing, for example, that learning through digital platforms can be an adequate replacement for face-to-face classroom experiences.

At the same time, while drastically reducing state support, they are blaming the budget crises on the schools themselves. In his State of the State address recently, Ohio governor (and presidential candidate) John Kasich spoke about the rising costs of higher education:

And let me just say that if we don’t begin to control these costs, these four‑year schools, many of them, will be just a memory.  Because people will figure out a way to get their education –- their credentials –- at a much lower price.  And these colleges and universities are going to have to make very tough decisions.

There are any number of problems with this rather innocuous-sounding challenge, but the most important may be the threat it contains. It is nothing unusual, either. As Julie Bosman, writing in The New York Times about an Illinois urban college on the verge of closing its doors, observes:

Governors and legislatures around the country have made deep cuts to state universities in recent years, leaving the smallest and least prestigious schools financially stressed, as tuition is hardly adequate to sustain many institutions. In Illinois, the absence of a budget means there has been no state financing, straining state universities and prompting some to furlough and lay off employees.

None, though, are in the dire predicament of Chicago State. Many, including the flagship University of Illinois at Urbana-Champaign, have healthy endowments or affluent alumni bases to lean on. Like some other predominantly minority institutions, Chicago State has neither.

A strike was recently averted when the California Faculty Association reached a tentative agreement with the California State University system. CSU, more urban, less oriented to traditional college students and less focused on research and prestige than the University of California system, never has had the clout of the UC — resulting in lower spending per student, something not likely to change.

The City University of New York, where faculty have been without a contract for six years, has been reduced to a punching bag in the rivalry between Gov. Andrew Cuomo and New York City mayor Bill de Blasio — while the more rural and suburban State University of New York has seen a faculty contract negotiated and has not suffered indignities such as the $485-million cut Cuomo proposed as part of the feud.

Ultimately, Cuomo wants CUNY subsumed by SUNY. The editorial board of The New York Times writes, “Cutting administrative costs is one thing. But threatening the special character of the city system and its 550,000 students is quite another.” For Cuomo and his upstate supporters, that “special character” is the race and poverty of CUNY students.

The result of current state constrictions is going to be a strengthening of the three-tiered system of colleges and universities we have now — but with greater divides. A fourth tier, the community colleges, is being relegated to an older model of vocational education that will mire graduates at the bottom. The top — and expensive — schools will still provide an elite education second to none in the world. The middle, which once was beginning to challenge the top, will still be good, but its reliance on contingent faculty as a cost saver has already stalled its progress, as has governmental interference such as that seen in Wisconsin in university governance. More will likely follow as the ‘hands off’ attitude toward higher-ed management continues to erode.

All of this extends to the urban institutions of the third tier as well. Cuomo, for example, wants a ‘management expert’ to restructure CUNY’s administration.

Beyond that, financially distressed urban institutions are finding they have to continue to increase class size, rely on a rump tenure and tenure-track faculty to take on more and more administrative duties, turn classrooms over to adjuncts and temporary hires, increase the number of online and hybrid (partially online) sections, accept completion of MOOCs and other external educational ‘products’ for graduation credit, and cut student support, something of critical importance to poor and minority students, many of whom are the first college students in their families.

Couple this with the recent push to increase retention rates and one can easily see that the value of the degrees from these schools is going to fall as underprepared students are pushed through degree programs not for their own educational benefit but to meet external quantified goals.

Teaching at an urban public institution can be one of the most rewarding experiences I know of (I’m on the faculty of one of CUNY’s campuses). But it is becoming more and more difficult as schools are forced to cut back on what they offer while increasing enrollment and graduation rates to meet financial and state goals. Less and less time is spent dealing directly with student learning — either in the classroom or in extracurricular activities — than with duties assumed of necessity rather than expertise, be they in helping students understand increasingly labyrinthine general-education requirements or in helping them with perplexing financial-aid problems — or in helping them understand the other baroque structures of modern institutions of higher education. Frequently, states are increasing faculty duties in other areas, such as mandating participation in online training in such things as bullying and sexual harassment. While it may be necessary to address such issues, the means for doing so has become so bureaucratic as to be more onerous than effective. However, this does provide another way for the state to assert control.

Unless states are willing to fund urban public campuses to the full extent necessary, allowing faculty to focus on learning and not simply on management, the distance between the top tier and the bottom, which once saw signs of closing, is going to increase to the point where it will no longer be possible to posit any equivalence between undergraduate degrees from various baccalaureate institutions. Part of the reason for the collapse of for-profit higher education (outside of the outright fraudulent use of federal financial aid) has been growing recognition that the degrees earned are meaningless. Unless we are willing to provide adequate resources, the same is going to be increasingly true for those earned from public urban universities, insuring that class and racial divides in America stay broad.