This is why Trump & Bernie got big: How neoliberalism broke the American working class 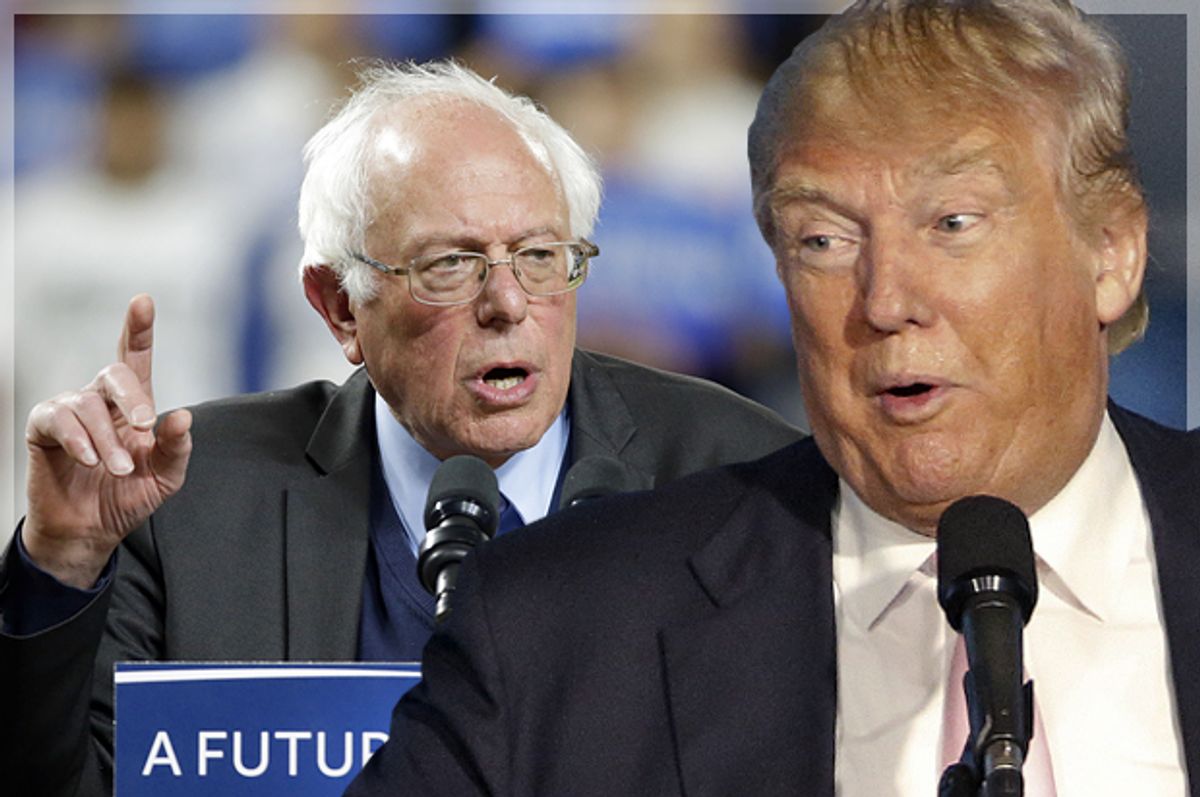 The surprise success of Donald Trump and Bernie Sanders has generated a bevy of ethnographic inquiries from journalists puzzling over just why working class people, the white ones in particular, are so angry.

In reality, outside the New York and Washington bubbles, it’s not that complicated. Trump and Sanders have tapped a vein of alienation that runs from deep in the Rust Belt and beyond. As historian Judith Stein put it, America traded factories for finance. And workers lost. The populism on the right (quasi-fascist) and the left (semi-socialist) differ profoundly on the question of white supremacy but both are grounded in appealing rejections of outsourcing and so-called free trade deals like NAFTA.

Stein is Distinguished Professor of History at City College and the Graduate Center of the City University of New York. She is the author of "The World of Marcus Garvey" (1986), "Running Steel, Running America" (1998), and most recently "Pivotal Decade" (2010).  She is currently working on a book, “Fabulous or Fortunate?: The Clinton Years and the Origins of Our Time.”

Salon spoke with Stein recently about the history of trade politics and the future of manufacturing. This interviewed has been edited for brevity and clarity.

Are you surprised that two insurgent candidates, on the left and the right, are successfully appealing to anger over free trade? What is it about the American political economy in 2016 that is making this such a potent message right now?

Yes, I am surprised that trade has emerged as a big issue. It has not been part of presidential campaigns because both parties have supported "free trade." There were always minorities in both parties, especially the Democratic, who supported what was once called "managed trade." Congressman Richard Gephardt based his campaign for the Democratic presidential nomination in 1988 on ending the huge growth of manufacturing imports in the 1980s. And independent Ross Perot made trade a big issue in his 1992 presidential run.

But trade did not divide the parties, and so was absent from presidential campaigns. This history explains why the issue is propelled by two political outsiders. Of course, the economy helps. In the wake of the Great Recession, there was more criticism of corporations and political elites. Currently, U.S. growth is sluggish and wage stagnation continues despite relatively low unemployment. The enduring trade deficit offers an explanation for the combination of low wage and plentiful, unstable work. In addition, there have been several elite studies demonstrating the millions of jobs offshored to China. But the politics is as important. Insurgent candidates pick up issues that elites have ignored. And, this one, trade, has festered for many years.

Why did the sort of criticism of deindustrialization made by Gephardt lose out to New Democrats like Bill Clinton? And what political constituency was Perot's anti-NAFTA message attractive to? Can he in some ways be seen as a precursor of Trump?

The Gephardt wing of the Democratic Party lost out to the New Democrats because of the different analyses of the 1980s. A group called the "Atari Democrats," like Gary Hart, believed that post-industrialism was the wave of the future -- high tech.  Therefore, attempting to "prop" up old and dying industries was futile. Thus, the 1988 Democratic candidate Michael Dukakis was known for producing the "Massachusetts Miracle," a high-tech boom during his time as governor. The now-populist Robert Reich also believed in the high-tech transition. If this was an accurate view of the future, then education was the solution. The Clinton New Democrats shared this view but believed that the party had to expand beyond its traditional constituencies -- unions and minorities. They would appeal to business with support for free trade and less regulation, Reagan Democrats, working class whites, with social issues, and suburbia with prudent fiscal policy. Although much of this was contradictory or unachievable, these differences made it impossible to address de-industrialization, which required a different analysis of the economics of the 1980s.

When Perot first ran in 1992 as an independent, outsourcing was an issue, but as important was the balanced budget.  So he got a diverse group who believed that a rich businessman, not a politician, could solve the nation's problems. After the election, when Clinton made NAFTA a priority, Perot became the most public anti-NAFTA leader, debating the issue with Al Gore.  Yes, I do think that Perot was a precursor of Trump. Both made a virtue of their blunt, truth-telling style. Both appealed to white men more than other social groups. But Trump feasts on social divisions. Perot did not.

It seems as though, if New Democrats like Bill Clinton want to know who to blame for Trump populism, they should look in the mirror. In retrospect, isn't what we're seeing on the right in some ways the result of Democrats abandoning white workers on economic issues and appealing to them on unsavory social issues like welfare "reform" and crime?

The New Democrats did try to woo on the social issues you mention, welfare reform and crime, not jobs. A good example is the transformation of West Virginia, which used to be a reliably Democratic state. Clinton refused to help the steel industry, in the wake of a flood of dumped steel imports from Asia in the late 1990s. After the financial crisis in the wake of 1997 and 1998 there, the Clinton administration concluded that the only way the big banks would be repaid was from exported manufacturing items, helped by subsidies and currency devaluation.  Here is where the rise of finance hurt domestic manufacturing. As a result, West Virginia from 2000 to the present was usually in the GOP column. I think much of it was white working class nonvoting as much as GOP voting. The effect was the same.

I had not thought about the reinforcing of prejudices, but you are right. The New Democratic reinforcement of the notion of welfare abuse and out-of-control crime certainly did normalize both. The recent tussle about Hillary's use of the word "predator" is a good example. Getting back to Trump. I think he has a mixed constituency. But insofar as it is white working class, I suspect it is from nonvoters, not Republican voters.

The media rarely challenges the economic orthodoxy on trade: We might lose out in some industries that we are less good at, the thinking goes, but will win out in areas where we excel. But the tradables we are losing, namely manufacturing, provide completely different types of jobs than the non-tradable services we are gaining. Why is the media so slow to question the status quo, and why has it taken the rise of Sanders and Trump to finally prompt some skepticism?

I am not sure how much the media, i.e. the editorial writers, have changed. It is mostly reporters who write about victims of trade policy. The economics profession has not changed so much. It would say if the new jobs are not so good, government through social policy should compensate the victims. They ignore the political fact that as unions weaken, the chances of getting progressive social policy also weaken. And, then, there is self-interest. The intellectual class benefits from free trade. They generally live and work in NYC or Washington where manufacturing is not an issue. And the media, dominated by conventional thought, does not begin to question it until challenged, which is what insurgent candidates do.

Eduardo Porter recently wrote in the New York Times that people blamed NAFTA for a lot of problems that were caused by other things like automation, competition from the anti-union South and, of course, China. Do you think that's fair? Is NAFTA a big problem, more like a symbol of a big problem, or even a distraction?

It never is one policy. What most countries do (and the U.S. does sometimes) is combine trade policy with industrial policies. Reagan did this with the semiconductor industry in 1986. The competition with the South is overstated. That would explain the rearrangement of, say, auto jobs regionally but not the decline. Automation would explain the situation if it was only a question of fewer jobs, but not the growth of imports. NAFTA to me is key in certain industries: textile, garment and autos. The first two after 2000 moved from Mexico to China. Whether it is Mexico or China, it is the same solution. Solve industrial problems with cheaper labor.

Is fixing the problem a matter of rebuilding manufacturing, or could a just economy be built from any mix of industries?  Would stronger unions and a tighter labor market solve the problem or do we need to make things for some reason?

Manufacturing is special because it is the source of R&D and productivity improvements which, after all, is the basis of an improving standard of living. It is also the source of the trade deficit. If people stopped driving cars, using steel, wearing clothes, etc., we could live in a service economy. But since we don't, we import too much of this stuff and don't sell enough to make this up. Therefore, households and the nation go into debt, which means depleting assets or borrowing from the global economy. That all crashed in 2007-2008.

What can government do to bring manufacturing back then? It has become conventional wisdom, as a FiveThirtyEight headline recently put it, that "Manufacturing Jobs Are Never Coming Back."

First, the conventional wisdom on manufacturing is volatile. A few years ago the Boston Consulting Group asserted manufacturing jobs are returning; now political pundits are saying they are not. I suspect that the turn-around is based on opposition to Trump and Sanders. Nevertheless, both judgments look simply at "market factors" -- labor costs, energy prices, etc. First, manufacturing is not all of one piece. Labor-intensive manufacturing -- toys and textiles -- probably will not come back.  But the kind of high-tech and capital intensive manufacturing can prosper in the U.S. with appropriate government policies. The U.S. government has just convinced the Chinese government to stop subsidizing steel exports. I do not know the details of the bargain and how well the U.S. will monitor it, but it happened. Unfortunately, only after over 13,000 steel jobs were lost.

The U.S. government must be more proactive. All of the actions of the Chinese government were violations of the WTO. It was only after the USWA [United Steelworkers of America] and the industry compiled pages of evidence that the government acted. So, vigorously enforcing trade policy is a minimum. Policing currency manipulation is another. And it is not only China. Japan, Mexico, South Korea and others also manipulate to enhance their manufacturing exports. Government procurement policies can also help. The U.S. government promotes the use of green energy. It could also promote the making of green energy technology in the U.S.

Making it more difficult for corporations to offshore is another area. Andrew Grove, the former head of Intel, suggested levying a tax on offshored labor. Make the money available to those companies which wanted to scale up their American factories. Promote research. Even the Reagan administration in the 1980s used a combination of trade policy and research when the U.S. semiconductor industry was flirting with death. My point is that there are plenty of policies that could help. The problem is that the U.S. lacks the political will to make manufacturing jobs a priority.