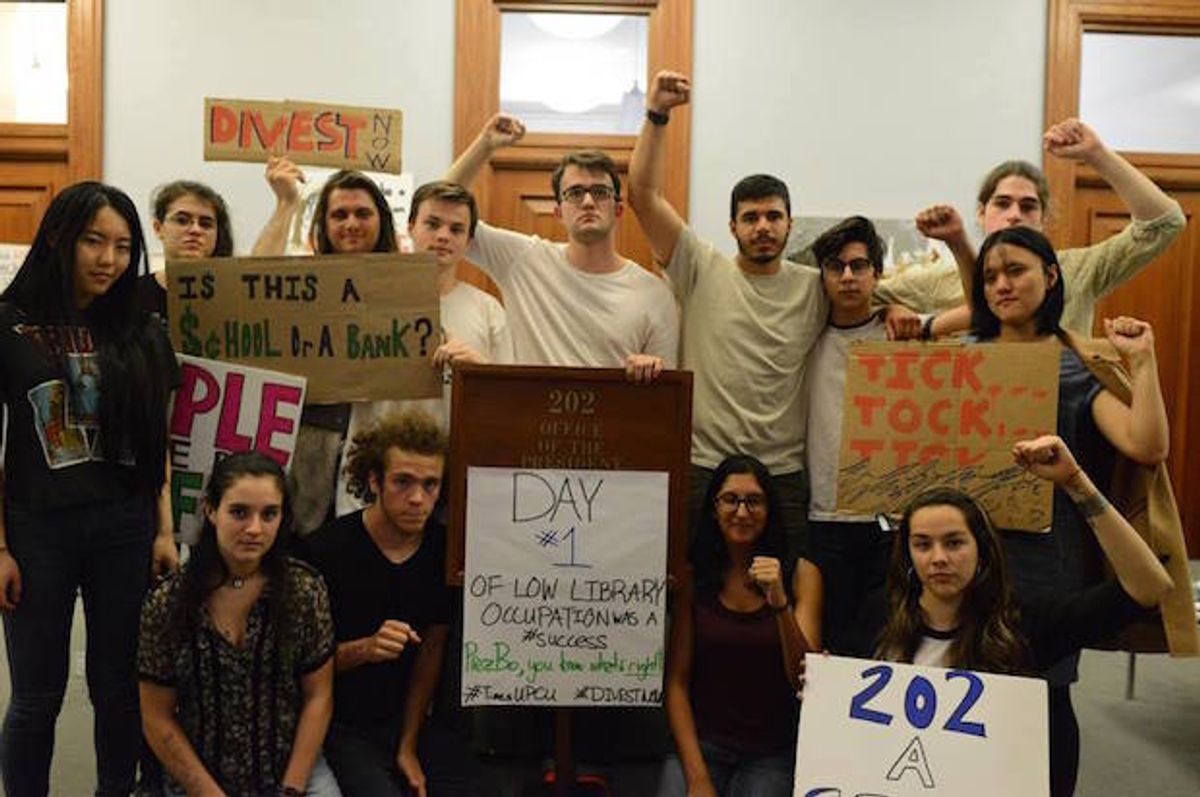 Several Columbia University students face threats of suspension after holding an ongoing, five-day sit-in protest outside of the president's office.

At least 35 students began occupying the school's Low Library on Thursday, April 14. The activists refuse to move until their university agrees to divest from the top 200 publicly traded fossil fuel corporations.

“I am sitting-in because I see climate justice as a human rights issue. It is immoral that Columbia actively profits from an industry that threatens the wellbeing of vulnerable communities around the world,” explained Nikita Perumal, an organizer with the group Columbia Divest for Climate Justice, or CDCJ.

"We've been campaigning for three-and-a-half years, and there is overwhelming student support for this," Perumal told Salon.

Presidential candidate Bernie Sanders tweeted a statement of support for the protesters on Monday.

On Thursday, 16 Columbia students spent the night outside of the office of university President Lee Bollinger. Several have since left. On Sunday, 30 students attempted to join the occupiers inside, but were denied entry.

The administration has locked down the building, preventing the activists from rotating out students.

"This is, to our knowledge, the first fossil fuel divestment occupation in which the building has been put on lock-down without chance of rotation," the group told Salon.

As of Monday, seven students still remain at the sit-in. The activists say they are willing to risk potential school sanctions or arrest. Columbia students rally outside in support of the sit-in (Credit: Columbia Divest for Climate Justice)[/caption]

The university administration threatened to suspend the remaining seven students, according to an email Sunday Columbia Divest for Climate Justice posted on its website

“The risk that I am facing is minor in comparison to the danger that people are facing when they confront the fossil fuel industry and private interests around the globe," explained Iliana Salazar-Dodge, another organizer with the activist group.

"I am willing to take this stand because climate change is affecting so many people, especially communities of color, and it is hypocritical for Columbia to invest in companies that profit off of destruction and death."

Columbia Divest for Climate Justice says it has "had countless meetings" with Bollinger, the Board of Trustees and Columbia's subcommittee on socially responsible investing.

According to the activist group, Bollinger has privately admitted that divestment from fossil fuel companies would not hurt the university's more than $9 billion endowment. Publicly, however, the students say Bollinger has remained silent on the issue.

"Time has run out for the university to make this decision. As president and a trustee, Bollinger has the power to prioritize divestment, and we demand that he does so by standing against the destructive practices of the fossil fuel industry," Columbia Divest for Climate Justice told Salon.

"We are taking a stand for our futures, because Bollinger refuses to."

More than 20 student groups have issued endorsements of the sit-in protest, including the Student Governing Board, the Columbia College Student Council, the School of International and Public Affairs Environmental Coalition, the African Students Association, Jewish Voice for Peace and more.

Columbia Divest for Climate Justice has thoroughly engaged in student outreach, holding teach-ins and events in dormitories. The activist group has gathered more than 2,000 petition signatures in favor of divestment, and has 350 faculty endorsements. Inside the sit-in protest (Credit: Columbia Divest for Climate Justice)[/caption]

This is not Columbia Divest for Climate Justice's first act of civil disobedience. Activists have disrupted speeches by figures like BP's chief economist. They have also interrupted formal school ceremonies, and regularly hold rallies.

"We believe that it is immoral for Columbia to be profiting off of the destructive practices of the fossil fuel industry, when science shows that 80 percent of known fossil fuel reserves must stay in the ground in order to prevent the climate chaos that would wreak havoc on vulnerable communities around the world," the group told Salon.

"Fossil fuel companies are morally bankrupt — some, like Exxon, have been directly tied to climate change denialism and the discrediting of climate scientists, while others contribute millions to policymakers to prevent meaningful action to be taken on climate change."

"Divestment is our way of applying pressure to revoke the social and political license of these companies, in order to fight for a safer and more just world for both current and future generations."

The Columbia activists are joined by an array of students at universities around the country who have held similar protests demanding that their schools divest from fossil fuel corporations.

Another 34 divestment activists were arrested in a sit-in at the University of Massachusetts.

Nor is this Columbia's first experience with a divestment campaign. In 2015, it became the first university to divest from prisons, after a similar campaign from student activists.

"Columbia itself has a legacy of civil disobedience and student activism," Columbia Divest for Climate Justice told Salon.

"As such, we find it highly hypocritical that Columbia can both celebrate this history of activism — accentuating it at admissions sessions and memorializing it in its archives — while also threatening the nine students currently occupying Low Library with a whole host of very serious disciplinary procedures."